The premise of this world premiere musical is that greed has its own sort of  reward and when you get it you might regret it, or, anyway, live to regret it if you're lucky. Underground, under the streets and the buildings of the town of Fall Springs, a town somewhere in the USA, there exists mineral oil deposits so manifest and magnificent that if the town can retrieve it the oil will turn their economy around and make them one of the most attractive and revered towns in the United States. In particular Beverly Cushman (Ellen Harvey)'s economy will be turned around. As the owner of a mineral oil based company of cosmetics and ointments she has taken it on as a personal project, finding ways to retrieve the oil quickly and in massive amounts, and she has hit upon fracking as the best way to go. Fracking. This is, obviously, the model of a modern major musical.

There are four single parents on the town council. Their single children have a rock band that writes songs about gloom and doom. Neither quartet understands the other group. But one girl, Eloise Bradley (Alyse Alan Louis), whose father is the mayor (Matt McGrath) and whose mother was a scientist, has a concept of what is happening and like the "Sybil" is an oracle whose message of doom for the town is justified by the result of the council's actions. Of course, no one believes her. Except for one man, her mother's former scientific partner, now a depressed alcoholic bum named Noland Wolanske (Ken Marks). Together, but really not soon enough, they try to warn the town about the physical havoc that fracking can bring. Noland and Eloise are the super-heroes of this show, but they show us how too little too late reaps too little too soon.

In the works since at least 2013 when fracking was a major issue for Americans, this musical with fun music by Niko Tsakalakos takes on a lot and presents a theater with a lot of design issues as things begin with a rosy view and end with the total destruction of the world these people know. A lot of the success in Barrington Stage Company's fine production is due to the scenic design work by Tim Mackabee whose concepts are beautifully realized, supported by the superb lighting design work by David Lander and the sound design impact created by Josh Millican. This "technical" team rocks the theater with the show's physical and emotional changes. They certainly support the vision of director Stephen Brackett as Fall Springs falls together. 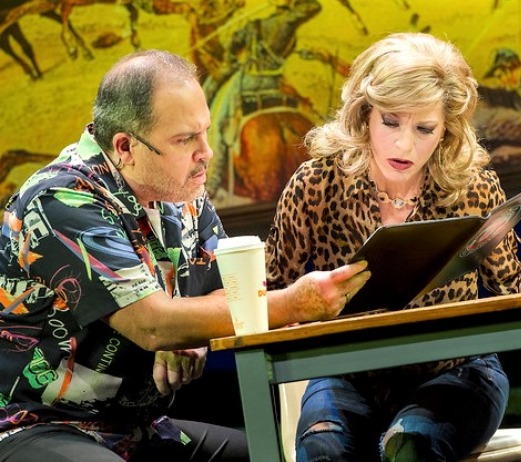 As we know from disaster movies the worse the situation the more love can bloom in the most curious couples. Roberto Mariposa, whose passion is tourism, and Veronica Mitford, the goofiest character, fall into deep attraction if not love as things progress from fine to fineable. Mariposa, who dances his way through life, is well played by actor Eliseo Román whose lush physical movement often provides a chuckle if not a laugh. Felicia Finley as Veronica is his match with her verbal malfunctions. As the comic couple they are a delight.

Alyse Alan Louis is strong and straightforward with Eloise's mission, so much so that she misses the admiration and verging love coming from Felix Cushman, played with an ingenuous emotional style by Sam Heldt. It isn't until near the end of the play that she begins to understand how close she has come to nearly losing what it is she really is seeking. Heldt brings us a young man almost lost in his open conviction about his feelings. As the son of the "villain" of the piece, and the bass player in the band, he is of little concern to most people, so his song, "The Bass Player's Lament" is a highpoint in the show's first act.

Matt McGrath as the town's mayor, eager to move his little world into the role of major player in the nation's economy, is a comicbook  creation who is transformed into a pained and misunderstood man with emotional challenges. It is a fine performance that hinges on his relationship with Eloise, a girl he cannot comprehend because she is so much like her mother, his now dead wife. I really liked what McGrath does with this role. He wrings sympathy from an audience that should be upset with his blind-sighted ignorance of Eloise's value. 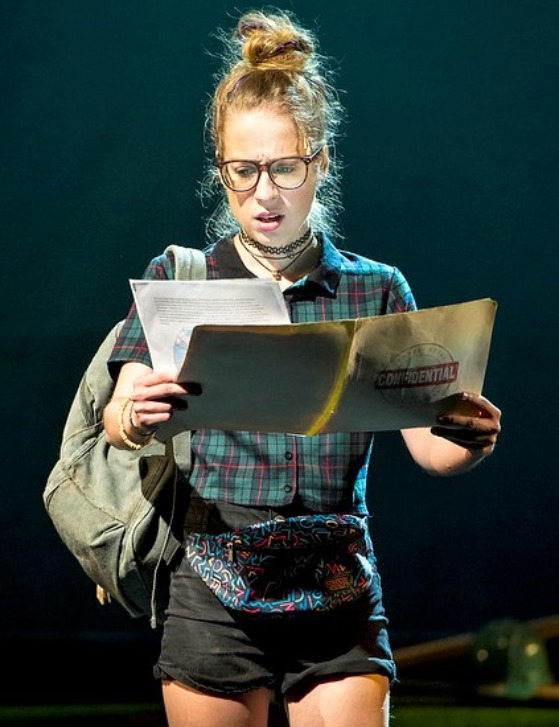 So much in this show hinges on Eloise. Alyse Alan Louis bring the girl into being with an urgency that is off-putting but at the same time is almost mesmerizing. Her scientific jargon is as confusing for the audience as it is for the other characters and that gives her the basic difference that defines the character. Louis spouts the rhetoric perfectly which makes it that much more insane and as the rock quartet sings, everyone, and everything, is "Sinking Into Oblivion."

Others in the band include Cooper Mitford, the drummer, played with great pomp and circumstance by Jorrel Javier. His size is matched by his enthusiasm and his near demise, highlighted by McGrath's song "Save One Life," is one of the highlights of the second act. There is also the irate lesbian teenager, Vera Mariposa, whose blue hair and mannish mannerisms are just right. She puts the world of Fall Springs into a very contemporary place and it is much appreciated.

Ken Marks plays the outsider, the bum, the drunken scientist partner of Eloise's mother who mourns her death more than the Mayor does is just wonderful, particularly when he comes to majestic life in the song "Human Again." It's a grand performance.

Then there is Beverly Cushman. Ellen Harvey plays the woman who starts it all, the woman whose own greed dominates the motivation for it all. Harvey has the unique ability to make every bad motive into a comedy complete within itself.  She sings like a female basso profundo, every note and every word more important than it really is. She delivers the most banal lines as though they were written by Shakespeare transcribing a god's dictated offering. She is dramatically funny and amusingly serious. If the play itself didn't have an interesting message to deliver, putting Harvey on the stage to confront the audience with any message at all would be justification enough to produce this show with her in it. Ellen Harvey, I believe, is worth the price of admission and a bit more.

So, is this the best musical I've seen all year - it is not. Is it worth your time and money - it most certainly is! It will make you think which is not always the case with a musical show, but will it haunt your dreams with doubt and distress, I don't believe it will. It's message was a vital one in 2013 but as we approach 2020 there are more insistent messages to find elsewhere.

For the talent involved at every level I am so pleased to have spent two hours and twenty minutes with the world of Fall Springs, but I don't want to live there.

Fall Springs plays on the Boyd-Quinson Mainstage of Barrington Stage Company. 30 Union Street, Pittsfield, MA through August 31. For information and tickets go to www.barringtonstageco.org or call the box office at 413-236-8888.