A Crossing: A Dance Musical

A Crossing, having its world premiere at Barrington Stage Company in Pittsfield, Massachusetts is about  just that: a crossing of the river at the border between Mexico and Texas. However, it is about so much more that that.  A group of people are trying to get to America and its so-called freedoms, but the journey is arduous and its difficulties create problems unforeseen and sometimes unusual. If, like me, you know some of what lies in store. Through dance and song cast members take us with them, their characters,  their Gods to a new world that isn't what they anticipate, treats them as harshly as their homelands have also done.  This is truly a story for our times. This is a romance and like so many of them it is poignant, beautiful and dangerously painful. ﻿ Twice during this 85 minute show I found myself reduced to tears and there were others around me who cried even more often. 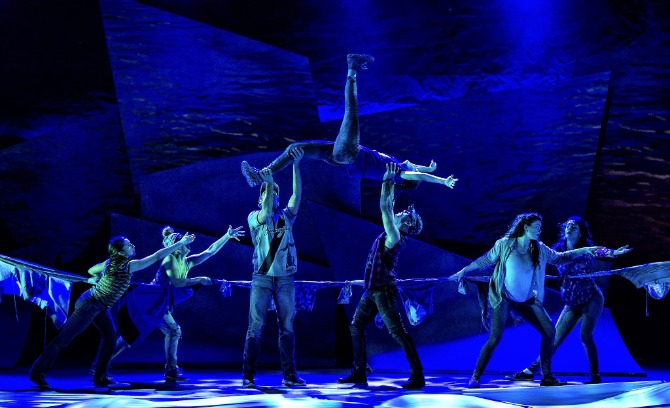 The show's remarkable look is the work of set designer Beowulf Boritt, lighting designer Jason Lyons, projections designer, Jeff Sugg and costume designer Alejo Vietti. This team of artists jointly paint pictures with the bodies of the performers under director Joshua Bergasse's staging. All of this combined with the almost non-stop music, Bergasse and Alberto Lopez's exciting dances leaves the audience holding its breath for an hour and a half. We've all heard variants of the play's stories on television over the past few years. There's little that's new here. However it is the presentation that makes so much difference. Narrated by the Sun and Moon, Sol (played by Andres Quintero) and Luna (played by Monica Tulia Ramirez), these two lyrically sing and move through the best moments and the worst with excited grace and lyricism. Ramirez's soprano voice is a pleasure to hear and her expressive interpretations are perfectly brilliant. If American audiences accepted Zarzuela these two would never be out of work and Teresa Berganza and Alfredo Kraus would soon be forgotten.

There is almost a love story at the center of A Crossing. Men seem to flock to Gisella, played by Ashley Përez Flanagan but she resists all comers. Find Your Way Home she sings to Martin (Justin Gregory Lopez) together with Arturo (Carlos L. Encinias) she sings of La Patria. What the girl witnesses by the end of the show is as defeating as her attitude toward the young men on this vooyage. Her two strong suitors are beautiful  men, strong dancers and excellent mime artists as well. And I MUST mention the band. They are superb. Under the direction of Jeffrey Campos, the on-stage assemblage of five musicians fill the theater with their divine music. 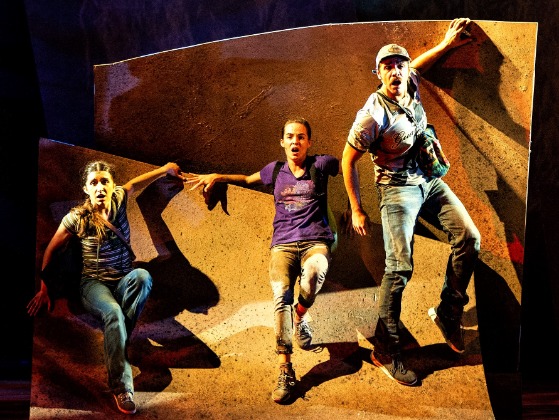 Boritt's set pieces move about the stage forming  a dozen locales. They guide, protect and provide performance spots for the company. They transform from a desert landscape into the interior of a gigantic cave, into a riverbank and, like the company itself, can be graceful, or striking, or subliminal as the plot needs them to be. They take the company's colors and transform their weight into weightlessness. As busy as the dance company is, without the sets the folks would seem stagnant. The play uses the religious aspects of the South  and Central American characters in both dance and song and several prayers are invoked along the way. These numbers are particularly eloquent and beautiful in their composition, and dance pictures and especially in their singing. the show uses its lyricism in many ways but none more exquisite than these religious stop-points. 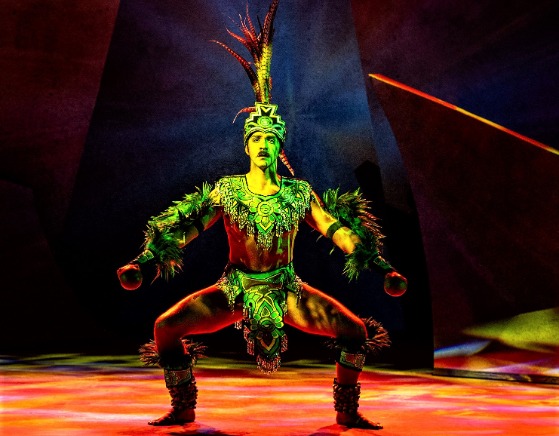 The cave sequence, following a major rain storm, is one of the few that doesn't involve singing, however it does delve in a bit of folk-dancing, based on Aztec traditions, with an elaborately costumed  Carlos Marshall-Villarreal as Quetzalcoatl. This is a high-point of the show. The Mexican-American dancer is clearly strong and sturdy but is also graceful and at ease with the flamboyance of his character. In the shelter of this cave, safe from prying eyes of men or Gods, the company revels in the barbarous, dangerous moment provided by the Aztec chieftain, venerated as the creator of mankind and earth.

While I've been going to the theatre most of my long life, and I've seen a myriad of story-ballets, dance specialties and dance concerts, this is perhaps the first time I've seen a play designed to open my heart and mind through dance and music and song in quite this manner. I am rarely impressed by new musicals any longer. It's not that they don't have the capability to change my way of thinking. They always could. This one has altered my way of thinking about the play itself alongside its methodology, its mythology and its imagery. I cannot conceive of the difficulties of forging a dynamic river without silken ties as dangerous as they are fluid. I cannot hear a heroic folk song now without thinking of men on rocks or a prayer without a village to sing it. This is a powerful theatrical experience, perhaps the most powerful show Barrington Stage has delivered to the Boyd-Quinson stage.  Let me be straightforward, simple and direct. I Just Loved It. 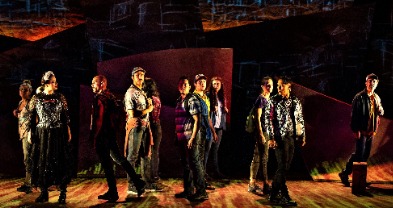 The Cast of A Crossing: A Dance Musical. Photo: Daniel Rader

A Crossing plays at Barrington Stage Company's the Boyd-Quinson Stage, 30 Union Street, Pittsfield, MA through October 16. For information and tickets call the box office at: 413- 236-8888 or go to their website at www.barringtonstageco.org