The monster in your head

This is just an example of how imagination can wrack the soul. Two young men meet in Samuel D. Hunter's new play, Clarkston, now on stage at Bridge Street Theatre in Catskill, New York and change each other's lives without even trying. Chris, played by Brian Patterson, is set to train newby Jake, played by Hunter Ringsmith, in display stacking at a Costco in the town of Clarkston, Washington. Jake is a runaway from Connecticut where his parents pray for his swift return to them. Chris, fatherless, has left his mother's home over a dispute about her drug addiction. The two young men have a lot in common including their latent homosexuality. Playwright Hunter has given them a double seduction scene in which the play's use of ironic comedy comes to the fore with Daniel Elihu Kramer's flawless direction. But the play is more than just sexual innuendo in the young; It is a serious look at the marginal people, folks who cannot, or will not, connect.

The two young actors cast in these roles take their best shots at one another and brilliantly pull off the awkward friendship that develops between them. Jake, who suffers from Huntington's Disease has quirks and frailties that Ringsmith plays with easy authority and his "accidents" all seemed real and not acted. The actor here has to play feelings rather than emotions and he pulls them off quite naturally. His embarrassment at his physical errors was as genuine as possible.

Chris's personal insecurities are equally well presented in scenes with his friend and scenes with his mother. Patterson even manages to make his rejection of self  believable as he curls himself into a failed volleyball on the floor of the stage. His rejection of reality was truly frightening. Both roles make the most of the challenges that obstruct friendship in spite of commonality. Both actors face these challenges and emerge winners which pays off in their final scene together. 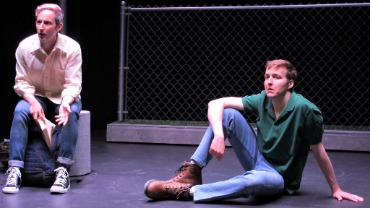 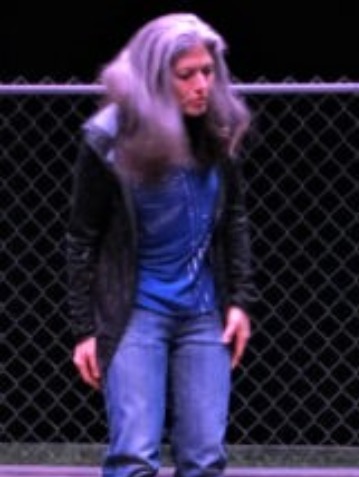 Trish, Chris's mom, is played by Tara Franklin in what may be one of her best-ever performances. Given much less on-stage time than the boys, she delivers a sharp, deeply hurt woman who attempts to both disguise and overcome the pain of her son's rejection and his, ultimately, unreasonable demands. He wants honesty and a clean relationship with a clean, devoted and truthful mother and as Trish tries to be that woman, she ultimately fails. Franklin gives Trish a large, obvious soul but after a while even we know that this is a picture of a soul and not something genuine. In her final scene with her son, she moves from one personality to another and another swiftly and sharply. It is acting perfection and a dark delight to witness.

Daniel Elihu Kramer has kept the play moving even with some lengthy set changes between scenes. His actors are like jazz musicians improvising on Hunter's scored music but under a conductor's baton controlling their entrances and their variations on the themes. There is a fluidity to the play that Kramer has put on stage in Catskill. The one hour forty-five-minute play moved swiftly and inexorably toward its much-needed conclusion and the time literally flew by.

The production is well designed by John Sowle (sets and lights), Michelle Rogers (costumes) and incidental music (Eli Kramer). This is one of those plays that feel almost like eaves-dropping/fly-on-the-wall theater and that works well for this play. Try to see it if you like a good play. They don't come around all that often and this one makes the grade. 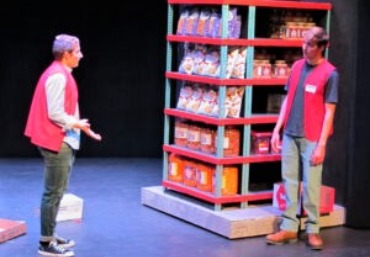 Clarkston plays at Bridge Street Theater, 44 West Bridge Street, Catskill, NY, Thursday through Sunday until May 8. For information and tickets call 518-943-3818 or go to their website at www.BridgeSt.org.