Book, Music and Lyrics by Irene Sankoff and David Hein.

﻿"Somewhere in the Middle of Nowhere"

Do you remember 9/11? Were you anywhere there? After seeing this show and meeting its characters you will never forget that day or the week that followed it. Never again, I promise you. This is the miracle of live theatre: you sit in the dark watching talented performers deliver a story that isn't theirs and certainly isn't yours and by the end of the experience it belongs to you, and you are wrapped up in it. "Come From Away," now playing on the big stage at Proctors in Schenectady, NY is that sort of show. I would say - and I mean this sincerely after seventy-one years of theatre-going - that this is the best show I have ever seen. 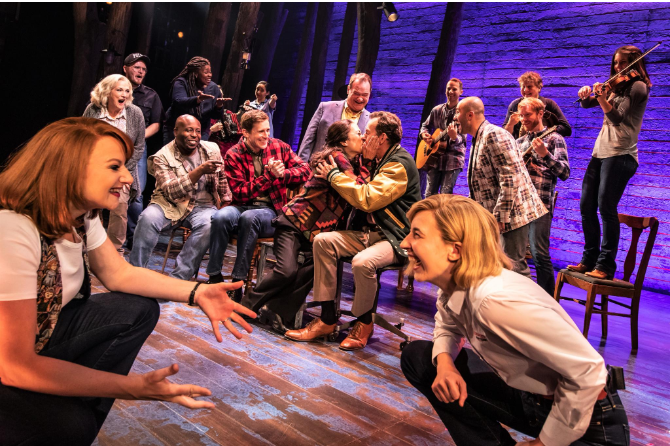 This isn't the greatest show I have ever seen. Its score is derivative. Too few actors play too any roles and it's hard to keep them identified. You don't come away from the theater singing the hit songs. But the tapestry of story-telling with music has moved you to tears and to laughter and sometimes to both at the same time. Musicals defy reality but this one is grounded in reality and the music feels natural and completes each person and each tale in just the right fashion. Instrumentalists join actors and singers and there is something so right in that even though it is so wrong. Director Christopher Ashley keeps his people moving nine-tenths of the time and in that movement we are moved by the simple passions of 13,000 people.

Some are strangers, 7,000 of them in fact, and some are Newfoundlanders, 6,000 of them. from the town of Gander and the surrounding area. They are thrown together awkwardly when terrorists destroy the World Trade Center, and the USA is closed to air traffic. One group gives shelter to the other, acts of charity abound. Lives are altered and nothing is simple ever again.

The entire company are terrific, but a few stand out because their stories dominate. Christine Toy Johnson and Chamblee Ferguson play an awkward love story as Diane and Nick. Their awkwardness is endearing, and their duet "Stop the World" speaks volumes as they stay strong and independent but merge into a single entity. The two Kevin's, a homosexual couple played by Nick Duckart and Jeremy Woodard are alternately witty and disarming until Kevin T. deals with his dream issues and sings "Prayer" - a devastating scene that grows and grows to a powerful aural and visual scene. Beverley. an American Airlines pilot played by Marika Aubrey sings of her life of achievements in "Me and the Sky" and breaks your heart with the pride you experience with her.  Hannah and Beulah, played by Sharriese Hamilton and Julie Johnson, each command the stage and touch your soul with their own. And its hard to leave out everyone else, but there aren't enough beautiful words to go around.

It's a stunning production with a set designed by Beowulf Boritt, Costumes by Toni-Leslie James and lighting \by Howell Binkley. Musical Coordination by David Lai and conductor Cameron Moncur is crisp and poignant with an eight-person ensemble. Kelly Devine's musical staging (as opposed to choreography) in conjunction with Ashley's direction keeps the show constantly in motion.

I cried, wept actually, and laughed on cue and felt so much the better for it. This is the best show thanks to everyone mentioned and not mentioned above. It is something you must see for yourself, experience and talk about afterward. Dealing with the five days of terror we all shared this is the long-awaited mood changer we all need so very much about the events of 9/11.

﻿Cone From Away plays at Proctors, 432 State Street, Schenectady, NY through January 30. For information and tickets contact the theater on line at: Proctorstheatretickers.