Nobody in this somewhat traditional play about the teachers, students and staff of a crumbling high school truly gets a happy ending, but there are some "wins" along the way. The play opens in anger and disdain when a 23-year veteran teacher, Pam, decides to take her own life after a meeting with the assistant principal who has been left in charge of the administration. Pam (Lisa Bryk) smokes and is generally abusive to Ricky Hubble (Brendan O'Dwyer), the man who has the school, its rats and its other problems in his grasp. The biggest, or second biggest problem, he has is that nothing he can do will avert the school's ultimate demise. Pam gets this and rather than suffer her haven's destruction, she takes herself out of the picture altogether. This act, this decision, sparks the conversations that follow in the next several scenes of this play. In its current production at Harbinger Theatre's performance space at the Albany Barn what they say isn't as important as how they say it; the theater's acoustics are a challenge to treble voices and acting the words is an all-too relevant solution. The play, for all its throwback sensibilities, is well worth watching. Author Ike Holter has set up some tricky relationships in this one-hour-and-fifty- minute play.

Most of the play is set in the teachers' Lounge and it is the right place for each tete-a-tete that takes place among the four teachers, one administrator who likes night-time meetings, and one student who make this room their home. One teacher, Arnold (Dennis Skiba), is a contemporary of Pam whose sudden departure has left him friendless. Skiba plays the man's irascibility very well and his line delivery is always languid and deliberate. Jania (Angeli Lillman), the Spanish teacher, is the most at home in the run-down slum neighborhood where the school is located. Her friend Sadie (Sade Thompson), she believes, is her ally in the forthcoming closure but being a ghetto kid herself she knows better than to put to much stock in this friendship of convenience. Sadie is an optimistic loner who understands what a work-friendship actually is and she never lets it get in the way of her own reality. 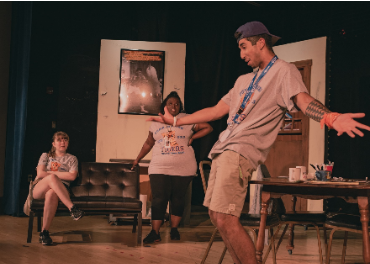 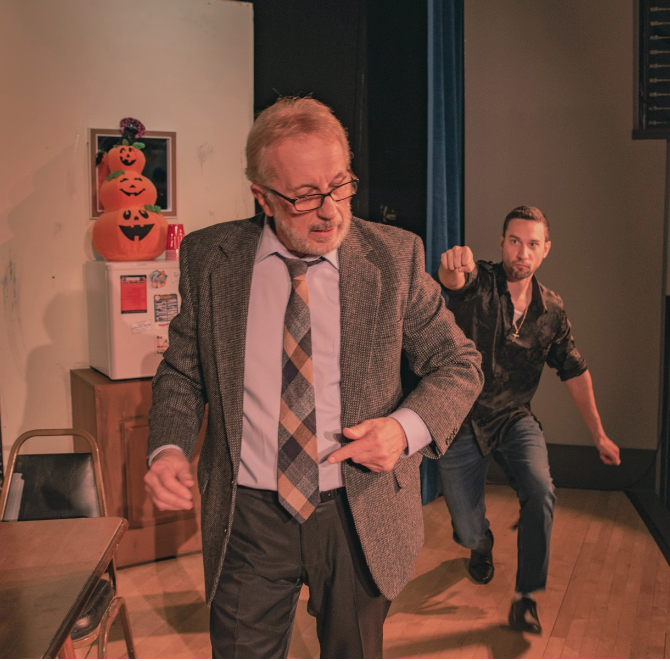 Ricky has a secret relationship with Luge (Brian Raña) which makes him the most complete character in this collection of incomplete people who have all put their lives at the disposal of their place of employment. In fact, every one of them have built their very existence into their jobs. It is, in the final scene of the play, clear that the dynamited collapse of their school spells the end for romance, dreams and hopes, even simple day-to-day realities for these unfortunate people, young, middle-aged and old. It is the silent lesson for the audience, the company's inadvertent students: diversify your life and never invest yourself completely in just one thing or you're bound to wind up a loser at the final blackout.

﻿﻿ ﻿Skiba, whose Arnold is an emblematic picture of a teacher, is excellent in this role, almost as though he was born to play the part. In addition, as director of the play he has painted living pictures with his cast and crew and managed to move an audience challenged by the room to hear the words of the play clearly. 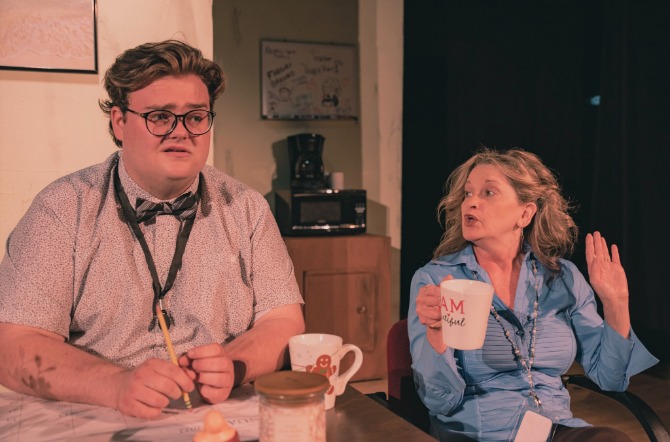 Raña and O'Dwyer make a fantastic couple who never seem fated to remain a pair but whose existence as such brings hope to the company of odd characters in the play. They work well together. Bryk is intriguing as Pam in all her scenes and Thompson and Lillman keep in character even when that seems like too much of a challenge. Halkitis is great as Donnie, the senior who becomes an insider with the adults and who just may be the most adult of them all.

Nick Nealon's lighting is excellent and Brian Starnes uses sound beautifully to keep the play alive; the set design by Mike McDermott and costumes (not credited) both deserve a positive mention.  This is another technical triumph for Harbinger Theatre. ﻿

Exit Strategy play at the Albany Barn, 56 Second Street, Albany, NY through June 25. For information and tickets go to their website at www.harbingertheatre.corg.