﻿"Don't Sit Under the Apple Tree with Anybody Else But Me..."

It's the glumly gleeful songs of World War Two that punctuate the written and danced rhythms of this extraordinary play now onstage on Capital Rep's new main stage in Albany, New York. Those old roasted chestnuts have kept us in touch with so much from the dark years before most of us were born and they are put to good use in this play (sometimes referred to as a musical (although it is not a musical, at least not in any traditional sense); it is a play that provides a light at the end of a long dark runway.  It is the story of the Tuskegee Airmen, the first African- American Army Air Corps pilots. At least it tells the story of four of them. It tells the story of how they were regarded and how they were treated, and how they treated one another. It is told by a WWII survivor who lives to see Barack Obama become President of the United States. Played very securely by Jeremiah Packer the story of this quartet of ill-equipped men is ultimately a tribute to all the unsung heroes of that war and all our wars since. And this play comes to us at a time when such histories are being suppressed in schools across this country. How fitting!

In 2017 I had the privilege of editing and completing a book about the only Jewish B-26 pilot in WWII, Artie Artig, who suffered similar slings and arrows that his  black counterparts do, and did, in this play. We get so used to thinking "this is America; that doesn't happen here," but as "FLY" shows as the four corpsmen actors Calvin Thompson, Trevor McGhie, Yao Dogbe and Packer it did happen, may still happen today, right here. This troupe of actors, so different from one another, playing men as unique as they themselves, forge impressions on our brains of stalwart characters who have to fight for everything in life, including just for being themselves. 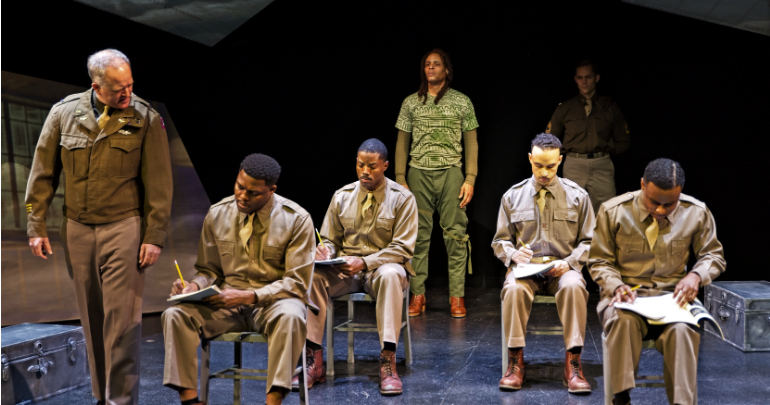 The first character we meet is known in the program as The Tap Griot. I had to look up that last word; It is defined as : a member of a class of traveling poets, musicians, and storytellers who maintain a tradition of oral history in parts of West Africa. As played by Omar Edwards the Griot is more than that. With his feet he builds tempo and rhythm into the play and he maintains it all. He is a theatrical figure with his own agenda who provides emphasis where words cannot, as well as a percussive accompaniment to many moments accomplishing the daunting task of keeping a scene on target and providing the other men a shot at making a point without overdoing it in the dialogue. So, like it or not Omar Edwards emerges a star in a class with Marcel Marceau. performing most of the time in mime and dance. 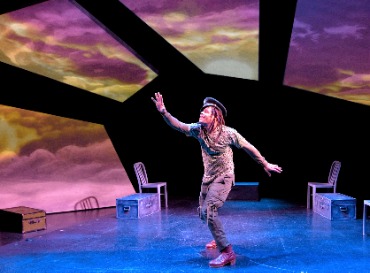 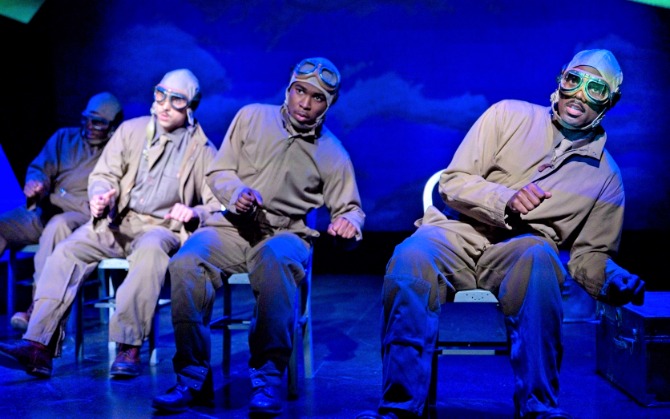 There are so many things that come to mind watching this show. Visuals and sounds prompt so many

memories here. The balance of the cast is equal to their A-E compatriots: Shayne Davis Cameris is great as Colonel Snopes; Torsten Hillhouse as Capt. O'Hurley and Ryan Fuchs as Co-Pilot Shaw deliver in their multiple roles. It's a great company in a top-draw experience.

The production that surrounds the players is equally rich and right. Beowulf Boritt's set is exactly right for this play, as is the lighting design by Rob Denton and the costumes by Isabel Rubio. John Gromada's' superb sound design along with Nathan W. Scheuer's projection design created a world of heightened reality that fully complements the stage work by choreographer Hope Clarke, and director Clinton Turner Davis. From the armed forces radio material at the beginning through the final visuals on Boritt's panels this is one helluva show.

FLY ﻿plays at theRep, at Capital Repertory Theatre, 251 N. Pearl Street in Albany, New York through February 28. For information and tickets contact the theatreby calling the box office at 518-346-6204.