The musical "Fun Home" is about the early, formative years of Lesbian cartoonist Alison Bechdel whose book of the same name spent time on the New York Times Bestseller List. This show, strongly based on the book, takes a hard, but musical, look at Alison and her family at three points in her life: as a child; as a college freshman; as a mature adult. To do this, three actors play her simultaneously on the Ghent Playhouse stage in Ghent, NY. Small Alison and adult Alison are played by daughter and mother Rosalyn and Helen Annely. Medium Alison, the college student, is played by Noah Hamm, who identifies as "They" and does so well in the role that it is impossible to reliably place Noah's gender (a boy's name; a girl's voice). As Noah plays the girl discovering her true self and simultaneously her father's true identity this seems like perfect casting.

This is one of my favorite regional stages. They never shy away from controversy and with this show they will have more of that then they may have bargained for. Bruce Bechdel is a barely closeted gay man, married to an indulgent and abused woman, father of three children, a teacher and a funeral director whose family is forced to live in a virtual museum and endure the presence of Daddy's male lovers. When his only daughter realizes her actual sexual preference, he is unable to accept, protect or advise her. Can a musical do justice to such trauma? It can and it does and the idea of "musical comedy" flies out the mortuary window leaving "musical meanness" in its stead. That is not to say this is a mean show or a horror show. No, it is an adult musical on adult subject matter and. being as well done as this company does it, it is truly worthwhile. 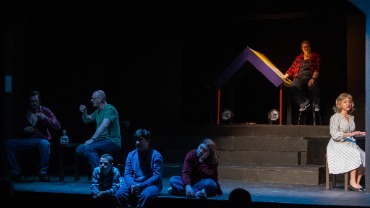 Helen Annely does well with the role of Alison. She brings a maturity to the part that enhances this memory play that unfolds at her feet. She is especially effective late in the show singing "Telephone Wire" replacing her younger self in a serious moment. Her daughter Rosalyn Annely also makes moments resonate as the young Alison coping with her ongoing relationships with her family, particularly in "Party Dress" and in the kids commercial "Come to the Fun Home" about the family funeral business with her brothers played very well by Brayden Huneau and Ely Loskowitz. 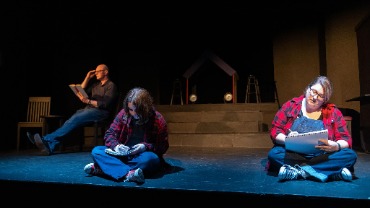 ﻿As the parents of Alison and her brothers we have Jeffrey Jene as Bruce Bechdel and Amy Fiebke as his spouse, Helen. While you may think it normal for adults to quarrel these two characters don't merely argue they present their resentments as though they were hot cross buns at Eastertime. Fiebke is at her very best in this role, strongly dramatic and solidly musical and when she finally fuses both aspects of her talent in the song "Days and Days" the stage nearly burns up at her feet. It is a shocking moment for the audience and the actress's electrical vocalism is enthralling. Jene has the hard job of being chimerical, changing mood, attitude and voice from moment to moment. The daughter he adores brings out the best and worst in him and his reaction to his wife's neediness is nothing short of nasty and violent. Jene gives a performance that will dwell in our minds for a long, long time. 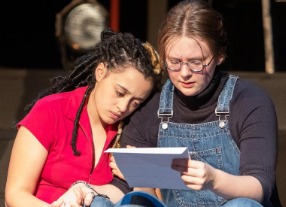 This i﻿s always Alison's story, though, and Noah Hamm is nothing short of brilliant in her role, lightly comic in the song "Changing My Major," a romantic ballad gone haywire. And Siobhan Shea, as the new love of her life, just fleshes out college girl, Joan, perfectly. The two are great together. 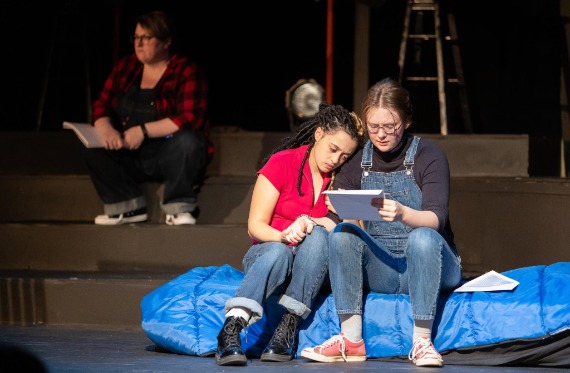 Co-directors Michael McDermot and Michael Mensching have brought this musical play together very well. They have guided their cast through the straits of injustice laid out in the script to a fare-thee-well. Every point is made and every eventuality in the story is justified except for one and that is a flaw in the script based on a flaw in the true lives of Alison, Helen and Bruce. His final moment in the play is still hard to justify for me (and this is the third production I've seen of Fun Home). Being true to the reality that created this play causes dissatisfaction in this observer and I hate that. It used to be a trivial truth in plays and movies that homosexuals had to suffer the worst things because of their nature. What happens to Bruce follows that trend and they tell you about it almost from the start of the show. I hate that.

The show itself is terrific and you won't regret seeing it. Even on lighting designer Bob Healey's dark set, designed masterfully by Michael Mensching Joanne Maurer's excellent costumes work ideally. Musical Director Joanne Mensching handles the score beautifully and the cast respond to her like true professionals. This is exceptional theater from start to finish.

Fun Home plays at the Ghent Playhouse, 6 Town Hall Place, Ghent, NY through April 10. For information and tickets consult their website at www.ghentplayhouse.org. ﻿