Harbinger Theatre at the Albany Barn

The ancient Gods weren't known for their generosity. They denied us fire, knowledge (apple tree stuff) and other things not worth mentioning. One exception was the God Dionysus. or Bacchus, who not only gave us wine, women and song but shared them all generously with mankind - in fact, he shared his enthusiasm overwhelmingly. Now, in the 21st century, he has decided to return to earth and take care of our problematic nature with nature. His triumphs with women and his devotion to the grape and other living shrubs and plants as a guide, he resolves to return as a Lesbian gardener named Diane {Amanda Dorman}. Her need for an adoring clique of human housewives brings her to a four-dwelling cul-de-sac in Monmouth, New Jersey where Diane sets her sights on four women with little to engage their fantasies.  This gives playwright Madeleine George a tableau on which to build her comedy, a serious look at the problem of climate change and its outcome. Diane is a harlot with heart hiding an undertone of human dilemma. She fairly quickly commands a trio of acolytes but one woman, Carol {Kathleen Carey} is a hold-out. In the overwhelming heat and humility of a massive hurricane she sets out to make her final conquest.

The other three women, Beth [Tess McHugh], Pam {Olivia Walton] and Renee {Sade' Thompson} are ultimately what Diane/Dionysus is used to dealing with, but Carol is another story. Her complete refusal to fall victim to cult mentality even resists the storm winds that Hurricane Diane brings to bear.  It's a realtively simple story but the telling of it takes a monumental ninety minutes peppered with laughter, a single production number and a lot of set movement, executed choreographically by the cast. all of which has been designed by director Patrick White and choreographer Sara Paupini.

The play's interesting costumes have been designed by Patrick White and Lauren D'Annibale. The set is designed by Mike McDermott, the wonderful and innovative lighting by Nick Nealon and the fabulous sound by Joshua Horowitz.

This play is definitely both inhabited and controlled by its vivid characters: the editor, the hapless divorcee, the Mafia wife and the businesswoman. Tess McHugh's hapless, humiliated ex-wife is just one example of a "type" used by Madeleine George to create an interactive community of upper middle-class women. McHugh plays her sympathetically which works well in the context of the play. Sade' Thompson is the gregarious editor who believes her work to be invaluable to other women. She is a Martha Stewart clone at its best, an egoist without triumph. Thompson is very, very good in the role. Italian American Pam is played by Olivia Walton with all the taste the character requires, and her New Jersey accent is superb. So is every little gesture. She's great in the role. 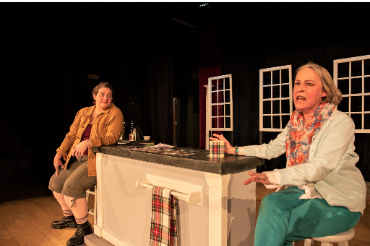 Kathleen Carey and Amanda Dorman take and hold the central honors as adversaries in the script. Carol, played by Carey, is the embodiment of stubbornness. It would take an army to move her off her moral stance. Diane is flexible, wily and manipulative and what's more she is blatant about it all. Dorman carries off the godliness with a very frank, forward humanity. Hers is a wild ride on an unbroken stallion that turns out to be a pregnant mare. There are so many sides to this character and Dorman lets each aspect peak out now and then which is fascinating to watch. Carol, on the other hand, is resolutely herself at all times. She is unchanging and even when confronted by the two simultaneous storms her self-conviction is irreproachable. Carey never gives an inch to her rival. From the moment in scene one where she decides how to deal with Diane right up to the play's final moments, she lives with her decision full-out. Carey pulls this off without letting a moment fleetingly alter.

This is an unusual play. No doubt about it. Its characters ad plot won't please everyone and its subliminal message about our planet and our actions won't make many people happy. Still the author has taken a different road to bring us a clue about ourselves and it's a road we owe it to our neighbors to travel down at least once. I recommend you take this option over tv news. At least there are laughs along the way. And that ain't hay. . .as they say.