It seems almost too political that WAM Theatre, a company of women doing work about women and for women should open a play about three indigenous women two days before National Indigenous Day (which is also National Coming Out Day) in which one of them is definitively lesbian and another one could be gay also. Set in British Columbia, Canada,  this play is about their physical and emotional journey to Kamloopa. an indigenous peoples' pow-wow, where literally the shit-hits-the-fan as each woman's spirit-side emerges.  This is a play in which the complications are over-complicated and the explanations are under-expoited.  Two room-mates, Mikaya (Ria Nez) and Kilawna (Sarah E. Denson) share an awkward co-existence which is made more-so when one of them invites a third woman to join them. She, Indian Friend Number 1 (Jasmine Rochelle Godspeed) , takes over their lives long before we realize that the other two are actually sisters, not friends. It goes on from there.

I do not know anything about the women involved in this show, including the director Estafania Fadul, but the messiest physical production I've ever seen of any show ever showed me a physical side of women that flies in the face of any other play I've ever seen about women's lives. These characters are out of control. Mikaya seems to never pick up after herself at all. Kilawna, who is a control-freak HR person, has little control over her own possessions, constantly misplacing things - her car keys are lost and her  cell phone is found in a salad spinner in the refrigerator (and who keeps a salad spinner in the refrigerator?). The clean-up of the stage between Act On and Act Two takes ten of the intermission's fifteen minutes. (Oh yes, another mess-up: originally touted as a 90 minute one act play this is actually a two hour two act play.) There is joy in this comedy but not very much comedy. The subject matter is serious. Self-identification dominates the subject matter as each woman comes to grips with her indigenous self and their spirit-selves attempt to dominate.  There are notes about this on the WAM Theatre website which I suggest you consult before seeing the play. This is as much a schoolroom situation as it is an entertainment. ﻿ 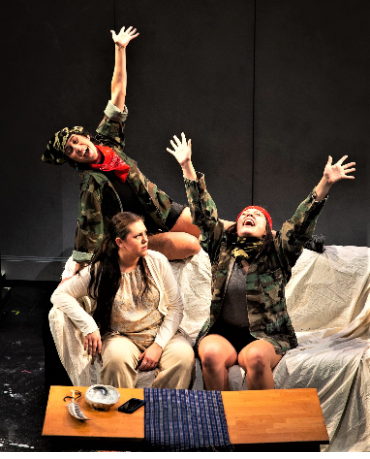 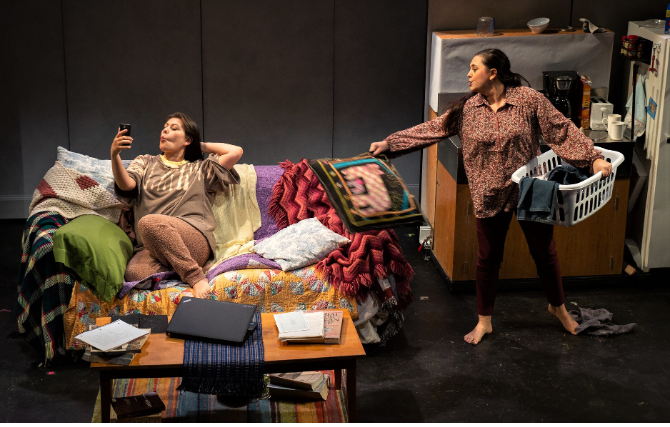 Fadul has given her cast a lot of leeway in their ritual dancing and outright cavorting as they drink, club, and work out their emotional hang-ups and that is to the good. Her view of the sisters' uneasy and often frustrating and angry relationship is clearly drawn. Their differences are perfectly played by Nez and Denson. It is the ambiguity of Indian Friend Number 1 (or Edith) is the hardest to define as  Goodspeed plays to the difficulties rather than attempting to make her entirely clear which makes her the most interesting of the three. She appears on the scene in "deus ex machina" fashion and in her deep involement with both girls remains apart and aloof though she is deeply entrenched very quickly.

On Calypso Michelet's sets, under the lighting designed by Emma Deane nothing is lost to the observer in the audience thanks to Fadul's staging of the play. Lux Haac's costumes are wonderful. Caroline Eng's sound design keeps the play alive. Juliana von Haubrich's props own the play at times and she cannot have been compensated  appropriately.  This is certainly the most unusual play of the 2021 season. It is confusing and difficult and not the laugh-riot that the advance publicity might lead you to believe. Instead it is a comedy - a play where nobody dies - and it is a learning experience.

Kamloopa plays at the Elayne P. Bernstein Theatre at Shakespeare & Company, 70 Kemble Street, Lenox, MA through October 24. For tickets calll the Shakespeare & Company bos office at 413-637-3353 or go to  the WAM website (go there anyway for more background info) at www.wamtheatre.org.