For the tenth consecutive year Barrington Stage Company has broken into the winter season to offer us ten new one-act plays, mostly by playwrights whose work we haven't seen yet. Assembling an ensemble of players who seem to be able to swiftly change character,  act comedy, tragedy, domestic thrillers or human parody the show presents a wide and wild array of vignettes that mostly delight most audiences. In this year of Covid complications the company has assembled and rehearsed these plays at Barrington Stage's second space in Pittsfield, MA and taped their plays for remote viewing, but they at least have not abandoned the theater.  Fans of the company will recognize the basic set on which they perform these plays,  for Joseph F. Martin has recreated Brian Prather's scenic design for the company's Time Flies and Other Comedies from the 2019 summer season adding one more familiar element to what we see. The perfect costumes for these ten plays have been designed by Azalea Fairley with lighting by Scott Pinkney and sound designed by Alexander Sovronsky bringing back familiar talents from years past. As an added element Production Stage Manager Renee Lutz, who has been a part of this company's lengthy history,  is running the show.

The Order of Things

Appropriately for the season the show begins on Christmas Eve(and later ends on election eve) in Brent Askari's play Protecting the Innocent as two parents prepare gifts for their child who keeps threatening to come downstairs. Derrick and Laura, like their child,  still believe in the old-fashioned values but struggle with the methods of keeping their child a child. Matt Neely and Maya Loren Jackson playfully twist reality in order to achieve their goals, including creating some truly gruesome possibilities.

That is just one twist in a well-packed group of variables this play expertly presents. 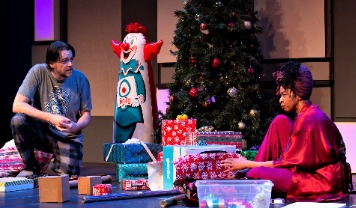 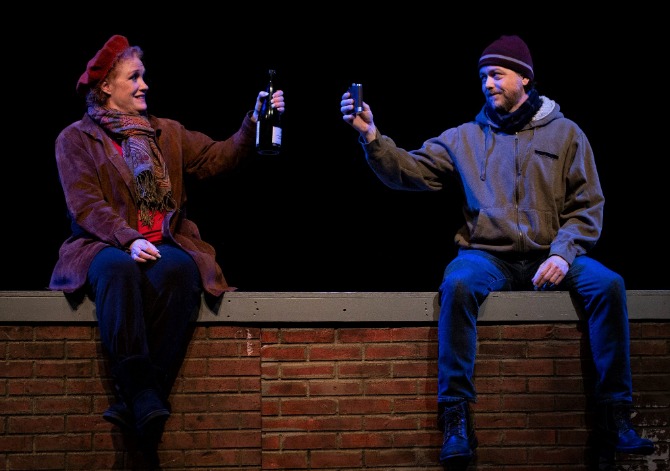 Neely appears two more times in the first half of this collection of new works. His third appearance is in Scott Mullen's excellent People Will Talk which pairs him with eternal favorite Peggy Pharr Wilson. Two very different people meet on a ledge above the twelfth floor of a downtown city building on a cold night. Each has something to drink; each has something to share. Neither intended to talk about themselves for neither anticipated meeting a soulmate on this dark  evening of souls. The sharing takes aim on their intentions and changes the outcome of these late-night adventures. We know what this is all about right away. What holds us to the end in anticipation is the combination of characters these two actors bring us.

﻿It is a fine short play worthy of attention and applause which the actors may never hear, but I hope they can sense how very meaningful their work is in this piece, one of the most serious in this year's collection.

As stated above Peggy Pharr Wilson is one of my favorite actors and in this group of plays she is allowed to shine throughout. In Marj O'Neill-Butler's  Finding Help she plays a woman whose daughter insists on pairing her up with a critical care worker, very much against her will.  Wilson's strength and conviction, in the face of disastrous behavior, is critical to the believability of the play. There is no one I can think of who could do this any better. Her interplay with Keri Safran as the daughter and eventually with Doug Harris as the hired help is absolute perfection. It is one of those plays I could see every day and never find fault with it. The first of her four appearances in this edition of 10x10 (she has been in all of them) makes me yearn for an evening of Peggy Pharr Wilson. Maybe the company will one day make that possible. 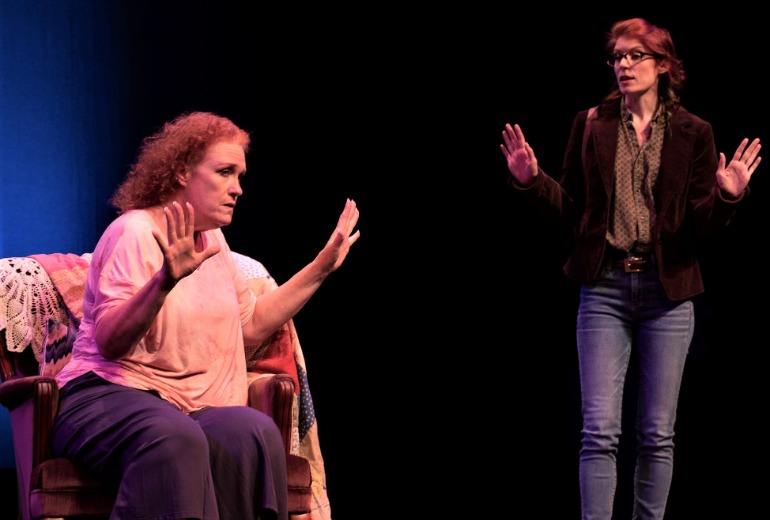 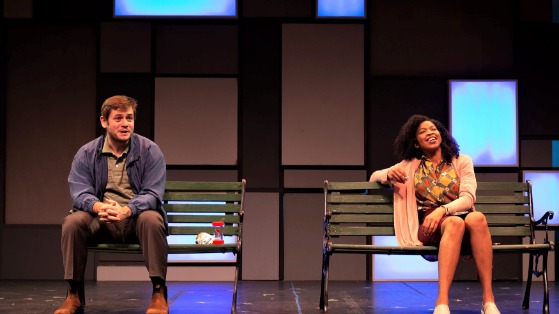 There isn't enough space in a review to fully chat about all ten plays. So the more unusual grab the space. Speed Play by Alex Dremann is one of those. Two people on their lunch hours meet to improvise the characters and plots of short plays. The imaginations of Jackie and Harry are baffling and beguiling. In the same way their relationship confounds us. Both Doug Harris and Maya Loren Jackson do great work under the direction of Matthew Penn who keeps the simplicity of joy both at bay and at large - not an easy task. Harris is equally wonderful in the play that comes before this one: A Dateless Bargain with Engrossing Death by John Minigan. Here he plays a man challenged by an old college acquaintance who wants, or demands, he take on a technical task that will keep him alive and out of Hell. His challenger is played by Neely who adopts a slick and resilient persona unlike anything else he has done in this show.

Both men played almost unwitting suitors in Ellen Abrams play Lizzie Borden Gets Engaged. The title character is played with delicious and curious physicality by Keri Safran as directed by Julianne Boyd. One of the silliest plays in the group, the director has used subtle movement and miniature props to keep us alert to Lizzie's oddities. Still it is Safran who adds elements of tightly held madness to her less than subtle characterization of a classic New England maiden lady, a reluctant spinster. 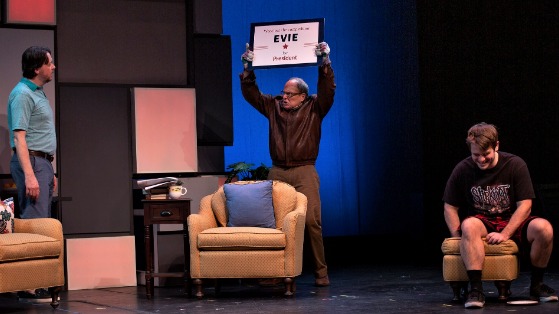 The collection ends in early November of the year,  two months before Christmas. An election is in process and Chester's wife is doing well and he wants her to win for various reasons. She is almost the central character, though we never see her (I think Peggy Pharr Wilson is in the next room, actually; at least I sense her there). This is Jessica Provenz's play On the Rocks where canabis, brownies and dry ice are among the topics discussed. This very active four-character play is the token family drama in the group.  For a serious work, it is a laugh riot and it did make me a bit sad not to be able to hear audience reaction to Provenz and Boyd's collaboration.  Robert Zukerman as the pot-inclined patriarch is simply exemplary. It is his play, to be sure although each person, especially Safran, has a moment that quite simply explodes on the stage.

Zukerman almost steals away with Christine Foster's Blind Larks also as one of four people trapped in a cave implosion. Penn has directed this as four talking heads magnificently lit by Scott Pinkney. The story is a simple one not to be exposed here; it must be come by slowly and gradually. A humane drama about a dog it deceptively reveals the flaws and foibles of people in a disaster. Uncredited Neely and Harris appear near the end. On stage, dimly lit, are Safran, Jackson, and Wilson as his undiminished companions. 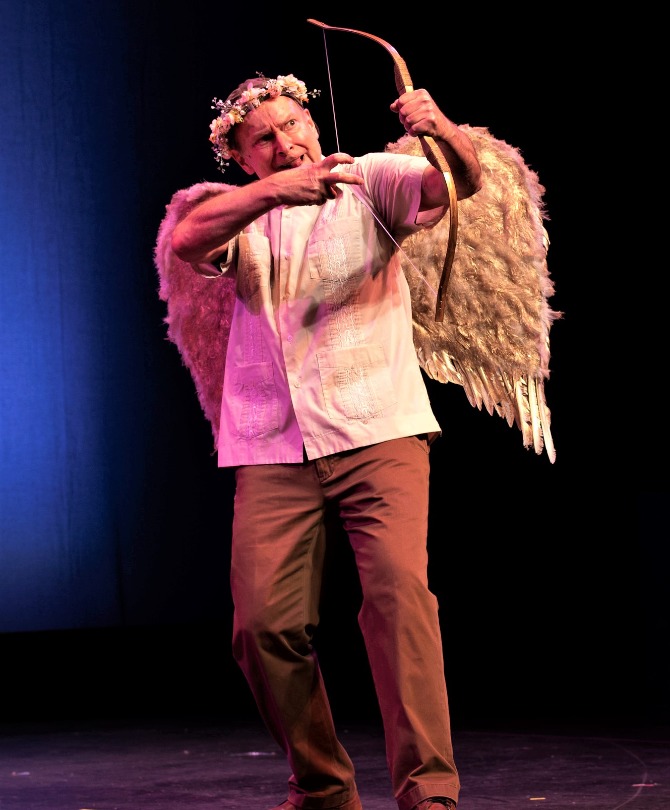 Robert Zukerman as Eros AKA Cupid;

I simply adore seeing Robert Zukerman in outlandish costumes. No one can bear up under the most comic variations in the way he can. In Jonathan Cook's comedy Don't Call Me Cupid, directed by Boyd, he plays Eros, the God sometimes confused with Cupid, who accidentally hits his intended target with the wrong arrow. His interplay with Jackson and Safran is truly hilarious here and the play, which is really fluff, gains a heavy measure of odd reality through their work. If the show was in two halves, as it usually is, this play would open the second half and brightly get us back into the sway and influence of live theater on our senses. As good as Jessica Provenz's play is as the closer it could easily change places with this one and truly send us home laughing if we weren't already at home.

The tenth play, Happy Birthday, Leonard by Walter Thinnes was just simply not my favorite in spite of Wilson's fine performance. I spite of that this is a very, very good hour and forty-two minutes of new plays presented by a group of top-line artists. It's a short run, so I recommend you find it quickly, book it and see it. Nothing else this season will give you what you'll find here. It's pure entertainment.

How to see the show:

Tickets are on sale now. For information on the schedule of showings go the Barrington Stage Company site at www.barringtonstageco.org. Or you can call the box office at 413-236-8888. The show is scheduled to run through March 21, 2021.