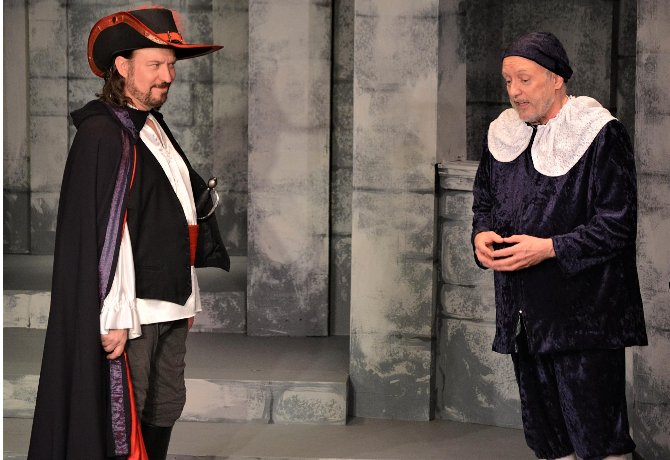 ﻿﻿﻿Don Juan, the libertine, by Moliere

Moliere is not to everyone's taste; rhymed couplets don't sing for most people. Onstage at the Ghent Playhouse his non-verse play Don Juan is being performed in a new verse translation written by Daniel Hoyt Daniels and directed by Barbara Leavell Smith. It has new music written by Catherine Schane-Lydon, a brilliant set designed by Sam Reilly with excellent costumes by Joanne Maurer and a cast of intriguing players led by Roger Gaboury as Don Juan and Mark Wilson as his faithful servant Sganarelle.

As in any good Moliere play the comic elements come first and this play is not averse to the physical and psychological silliness that makes his plays work well. When a creditor comes calling on the salacious and mischievous nobleman whose only obsession is seduction of women, the older man is given the "treatment" which takes up a lot of time and energy and results in his being ultimately ousted without achieving his simple goal of receiving payment for goods. Bill Sanderson as Dimanche, the creditor, was lovely.He fumbled and failed and was cajoled quite naturally, a tribute to both the actor and director in this instance.

The play is principally occupied by men (there are four women in the play) and their work is almost always physical. However it is the nature of Don Juan, the libertine, that Director Smith concentrates on and she draws some fascinating parallels to our own time in this production.

In attitude her Don Juan is a devious, nasty man who mistreats those who love him including his own father and her servant. Abuse and scorn rise above all other concerns and by the final act (there are five split into two performance acts) it is clear that Donald Trump is the target of this play, every one of his habits reflected in Juan's way of working. He mistreats women, he scorns advice, does no research into how he affects people, he pays his employees with promises and leaves them broke. Politicians need to look at Moliere's work, or Daniels' work, to get a cleaner picture of how such a person should end his days. 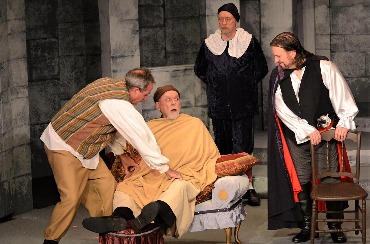 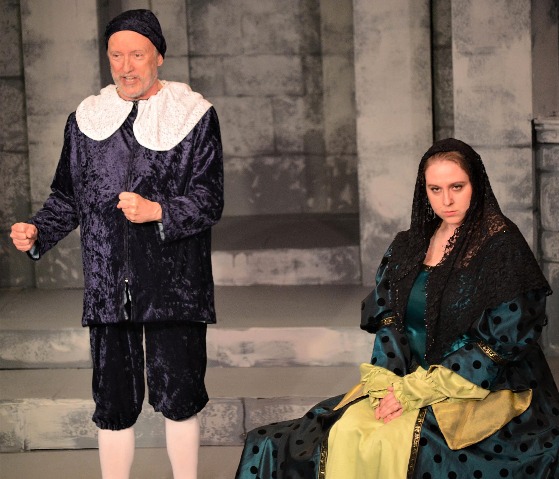 The Don is pursued by a woman he has despoiled and won't marry, Elvira. She is a stranger in a strange place, beautiful and sincere. She is well played by Nellie Rustick whose scenes are both effective and affecting. She journeys from classically moving to critically disarming. She actually ends up setting Don Juan into a different mindset which is a triumph - almost the only one - for a character not in the middle of it all.

Mark Wilson's performance prompts me to suggest that the name of the play be changed to Sganarelle, his character's name. Wilson plays the perfect servant and his dynamic work here is so close to brilliant that it is one I cannot forget nor ignore. This actor is the best in a fine company of players. He is, as indicated, the person who carries the show off the page and into our minds. 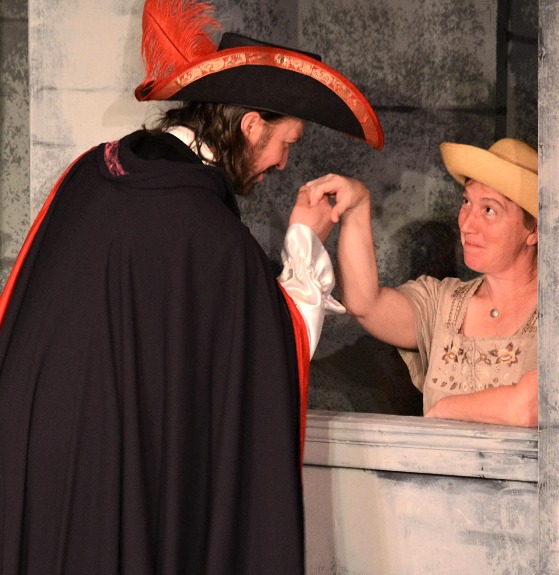 Composer/player Catherine Schane-Lydon is an active member of this company of players. Her work here moves into the range of personal muse for Don Juan who actually courts her at one point when she drifts from her instrument to an upstage window she he sees her, performs his romantic rituals and moves on. Still, at the piano or otherwise she underscores his decisions and his actions with lovely ditties that are sometimes more modern than the play embellishing the growing recognition of Daniels' and Smith's concept of who this man really is for us, the audience.

Gaboury is often just right as Don Juan, but sometimes he just isn't. The performance, I am sure, will grow in the right direction, but as of opening night it was not quite whole yet...especially with Wilson in full view every minute. 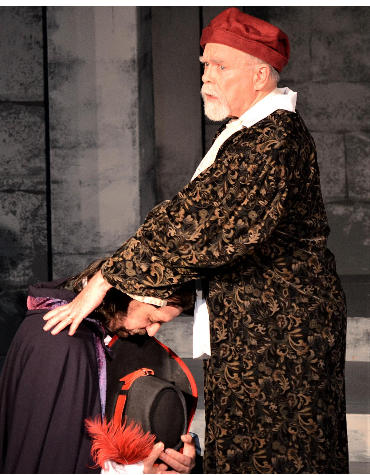 Shining slowly in a role that has an impact on the psychology of the play is Todd Langley as Don Carlos, Juan's father. Though his speeches were stilted and slow, the humanity in this character came through clearly. He moved the audience when seeming to move his son, and the realization that followed made us feel ashamed that Juan's mocking of his father's passion was as Trumpian as anything seen in the show.

Among the other players of note were Bethany Geiger and Elisheva Malfatto playing two more of the women Juan just cannot resist seducing with his charm and his promises. Both women gave their moments their all and were quite convincing.

James Hulihan was a funny Pierre; Dan Dolan was a fine Ragotin; Christopher Knable played a statue whose role is to make the comedy into a redemptive tragedy - and he was fine accomplishing this.

Kevin Kilb was a marvelous Guzman whose mime-show opening for the play was delightful. He played three other roles and I cannot tell you which were whom, but each of his appearances seemed to cheer up the others in the cast. He had the same effect on the audience.

All of the photos in this review were taken at the opening night performance by Cindy Smith.

﻿﻿Don Juan, the libertine plays at the Ghent Playhouse through June 9. For information and tickets go on line at ghentplayhouse.org or call 800-838-3006.