Is "allegory" the correct term to use when describing this play, a WORLD PREMIERE presented by Barrington Stage Company? An allegory is a work of art, such as a story or painting, in which the characters, images, and/or events act as symbols. The symbolism in an allegory can be interpreted to have a deeper meaning. An author may use allegory to illustrate a moral or spiritual truth, or political or historical situation. This play certainly fits into that category in so many ways and yet it swerves and winds its way around the perimeter of this definition as it brings us real people and real events with the facts given an obtuse presentation and the characters names confused with the names of other historic figures in a quirky, jerky way.

So is this play by Stacey Rose a satire? Or a parody? Is it a strange sort of mystery play - in the religious sense of the word? After all Jesus Christ Lincoln puts in an appearance. Is it a send-up of how historians create their books of legend, fact and myth? It could very well be all of these things ( some of which George S. Kaufman defines as "the thing that closes on Saturday night." ), but one thing is very clear: this play has a long life before it, even if it only has a short run at Barrington Stage Company's St. Germain Stage in Pittsfield, MA. It only plays through June 30.

﻿We are in a "secured family entertainment theater" near you, and in its backstage area, in the not too distant future. A quartet of entertainers are seen in silhouette. They are about to perform a four-part musical melodrama about the history of the American Negro, a species now long gone. These four versatile actors will play all the parts, present a negative image of black history in the U.S. with an emphasis on famous moments in time. And though the script maintains that this show is about the demise and disappearance of all black people, all brown people, the cast of players are brown and black.

This not a contrivance. This is the way things are in a future America. The subject of race is of such universal interest to Americans of this future that the company does its show as many as twelve times a day. Headed by Donavan, a 45ish man, the leading duo are Leigh and Grant (a metaphor,get it?) and the quartet is completed by a relatively new participant, Jeffery, who has been taken away from his wife and child to enjoy this career opportunity. It's a wild ride for the quartet who know their roles and play them, sometimes with regret, to their conclusions. The show(s) within the show are not what the play is about, but it (they) are what this show is really all about: the abuse and mishandling of the Negro race, from its Afrique existence to its American peril. 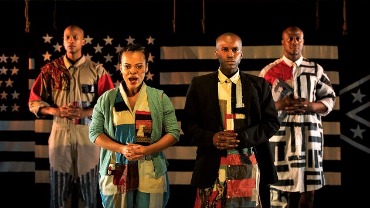 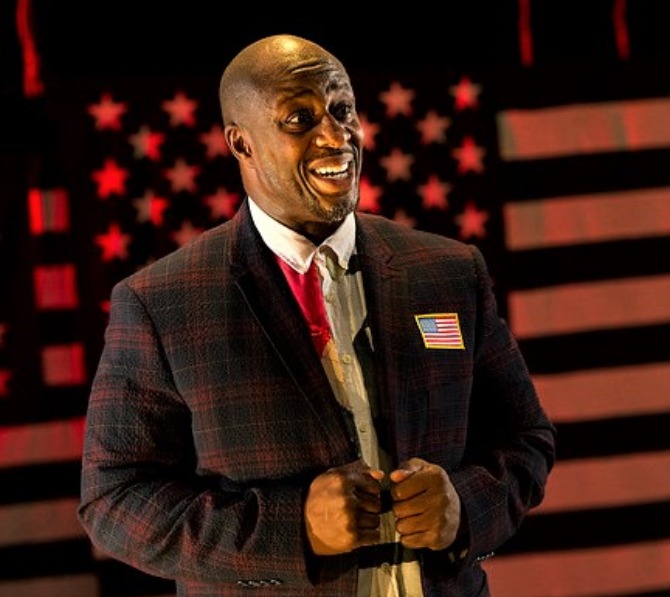 ﻿﻿There is a fifth character in the play, The Voice, played with panache by Peggy Pharr Wilson. This person, clearly white from her vocal quality and her commanding nature, is in control of Donovan and the others, often ordering one of them up to the "office" clearly a disciplinary station. Wilson takes over the psyche of the other four people every time she speaks, whether to announce "places" for the troupe or talking politics. She remains unseen, but what a tour-de-force is this role.

Her chief antagonist is also her most loyal and dependent actor, Donavan, played by Ansa Akyea. He is expected to lead the troupe, work with them, attest to their loyalty and oversee their individual ambitions. On this particular afternoon his tasks are impossible. Akyea is both a delightful performer and a dynamically entrancing human being. He brings physical and psychological strengths to the role. His ultimate choice or destination is devastating. This is a remarkable performance..

﻿﻿Jordan Barrow has an incredible singing voice which must extend upward three octaves. He is a sensitive actor with many emotional colors which he presents physically while keeping his musical tone unswerving in his vocal delivery. As Grant he makes a perfect acting match for Leigh, played by Kalyne Coleman.

Coleman plays the youngest character, but one with enough worldly experience to know what is wrong and what is right in the life-path she leads. In no way a shrinking violet, she does pull back from the romantic tasks she has been assigned, tasks that could guarantee that the title of the play is wrongly written. Her belligerence is beautiful and her movements are graceful making her an ideal representative of the larger human race rather than a significant representative of just one facet of mankind.

Jeffery, a difficult role, is wonderfully played by Peterson Townsend. The first one to suffer the Voice's wrath, he is the representative victim of the old South's hardness played out in the play's real time America. Jeffery is the symbol of everything that is, and has been, wrong with the relationship between the races. Townsend endows his man with all the humanity the others attempt to hide, an action that Jeffery is not capable of maintaining. 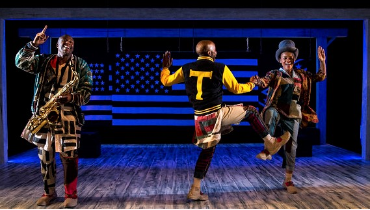 Logan Vaughn, the director, along with choreographer Kevin Boseman, has toyed with us visually as the troupe move from very old-fashioned Minstrel Show figures to contemporary disco creatures as they follow historic trends in their four-part play. Vaughn also endows them with much-more relevant human qualities shared by members of all races. They sing a rewritten edition of Eubie Blake and Noble Sissle's "I'm Just Wild About Harry" and move to a parody of the dances of the seventies: The Hippity Hop. The play's visual structure and its strictures make a joyous yet painful set of pictures for this comedy/tragedy theatrical voyage.

Vaughn's visualization is aided immensely by the stylized and carnival-like prison costumes designed by Ntokozo Fuzunina Kunene, the sensitively technical lighting design by Cha See, and the magical backstage/onstage arena created by Jack Magaw. This is a play in which the sound effects and music are vital for the fun, and the threats, to be fully realized and they are provided by Luqman Brown.,

This is a play whose politics could not be realized in any time but our own and it should survive its time as a symbol of its time and its polished overview of history and the world we know now. It couldn't have been written three years ago and it may not be playable five years hence. For right now, however, it is a relevant piece of theater, as close to a true Brechtian experience as you may see this year or next.

America v. 2.1: The Sad Demise & Eventual Extinction of the American Negro  plays on Barrington Stage Company's St. Germain Stage in the Lee and Sydelle Blatt Center for the Arts at 36 Linden Street, Pittsfield, MA through June 8. For information and tickets go to Barringtonstageco.org or call the box office at 413-236-8888.