The final scene of David Mamet's new play, "The Christopher Boy's Communion" which is not about the Christopher boy or his communion. is the only interesting period of time in this one hour, fourteen minute play. It leaves us with questions. Is it a result of the experiences of that communion day's events with Joan (Keira Naughton) having rethought her prejudices or is it a flashback to events she has long denied in order to justify her errors in judgement? The play itself begins after a 22 minute prologue in which two detectives talk about police procedures, case histories and religious confusions before bringing up the murder case that concerns the characters of the play ( not including the Christopher Boy or his family). Kevin O'Rourke and Monk Schane-Lydon play the two cops. The prologue is really an interrupted monologue delivered by O'Rourke brilliantly. 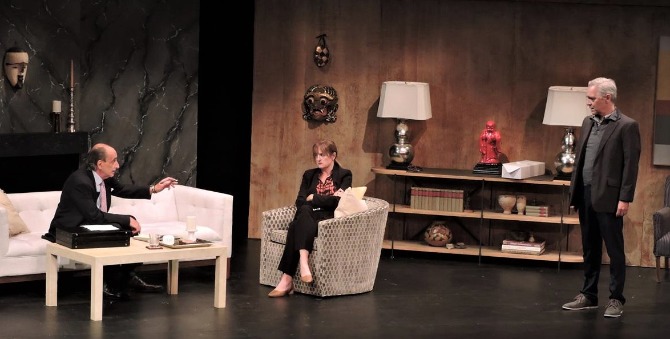 Options abound in this play. Joan seeks many different solutions to her son having been arrested for killing his Jewish girlfriend. She has lost her connection with her father's crucifix, She cannot accept her lawyer's (Will LeBow) choices, her priest's (Nathan Hinton) disconnection and honor, or her psychic's  (Diane Prusha) uncertainty. Her husband Alan (David Adkins) disagrees with intensity on the subject of their son and his crime (also options of one, two, or more).

In spite of an exceptional cast, good physical production with sets by John Musall, lighting by Lara Dubin and costumes by Brittney Belz. and well-pointed direction by Jim Frangione, this is not a great evening of theatre but rather a dreary collection of dialogues for the superb Keira Naughton and the others. If not for that final scene there would be little to think about or consider. Mamet's dialogue is his usual quirky-realistic time-filler. Little else.

The play does encourage conversation. What will come out of those talks I do not know. The playwright has given so much time and effort to the little details and so little to the basics that characters feel complete but they also seem to have very minimum relationships to one another. More is made of the dead young woman than to the living people. They are like window-dressing to Joan and even she is one-note until the last scene of the play when she is more human in the unknown and uncertainty of the play's realities. Kevin O'Rourke's perfectly played opening speech sets a tone for a play about so much less than its own topic though it s the most revealing aspect of Mamet's abilities.  I liked everything except the play.

The Christopher Boy's Communion is playing through August 8 at Simon's Rock College of Bard  as a production of Great Barrington Public Theatre through August 1. For tickets and information go to GreatBarringtonPublicTheater.org