Old-fashioned musicals of merit come around rarely these days. But Goodspeed Musicals in East Haddam, Connecticut revels in them every season. This summer they are adding a brand new one to their list of enjoyable, charming shows, but this one is very different from the rest of them.

This one STARS a dog. A dog named Bowdie.

Because of Winn Dixie, ﻿Book and lyrics by Nell Benjamin, based on the novel by Kate DiCamillo. Music by Duncan Sheik. Choreograhy by Chris Bailey. Directed by John Rando. Reviewed by J. Peter Bergman.

﻿"I looked up manipulative. It's a very scary word."

Opal is just thirteen years old. Her father, a Preacher, has moved them from a familiar existence to a new town in rural Florida where they know no one; from a comfortable home into a trailer park; from a place where Opal believes her long-missing mother can easily find them to a strange world. She is not happy with this move. She is at the age where answers are becoming more necessary and here father won't supply them. On her first day in town this "stranger" meets another stranger in town, a stray dog. They meet in the Winn Dixie supermarket and assuming they are together the proprietor greets them harshly. They become an identifiable unit in spite of Opal's protests. She accepts the inevitability of this and, naming the stray Winn-Dixie-Dog, they begin their interesting journey together.

Winn-Dixie, a southern heritage brand supermarket, proudly serving the communities of Alabama, Florida, Georgia, Louisiana and Mississippi is actual. The story, near as I can tell, is fictional, though the book has elevated Winn-Dixie's status throughout the world through Kate DiCamillo's very successful novel and the Jeff Daniels movie.

Now, with an up-and-coming musical show the story has a new chance at entrancing people, especially with Bill Berloni's trained dog, Bowdie, who has learned over 120 cues and actions for this production. 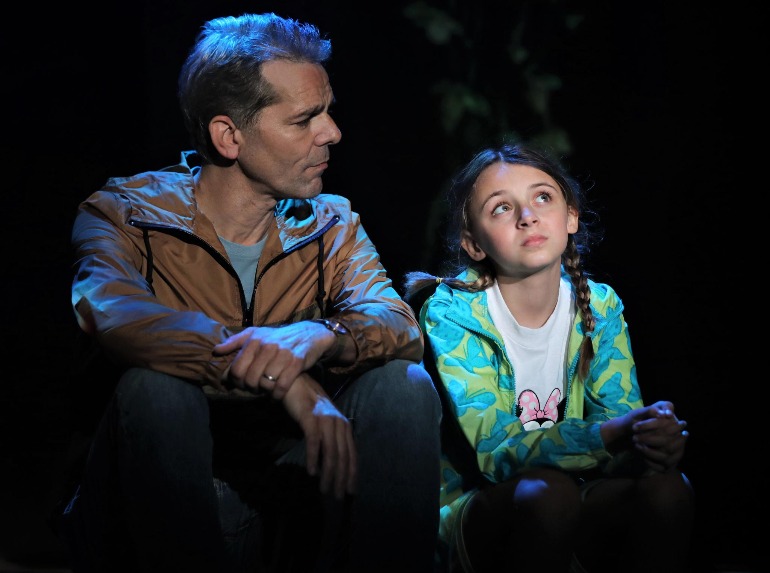 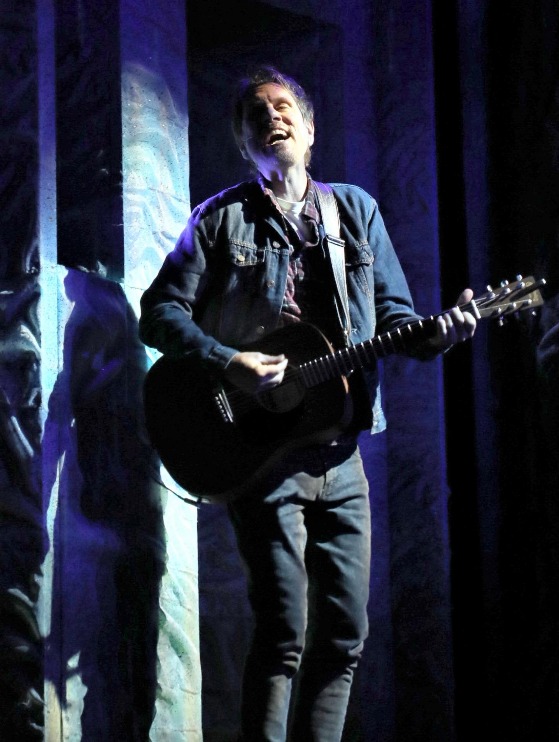 The character, Otis, is an ex-con who runs the local Pet Store and, more than anything else, plays the guitar. He is beautifully played by singer-songwriter David Poe. He plays the role of a detested local with justifiable charmlessness and ends up being just about the most charming character in the show. He encourages Opal to take her time becoming who she will be in songs like "Searchin'" and "You Can't Run," a ballad that ends the first act. Poe is definitely at his best singing, but his scenes in the second half of the play are heart-warming and nearly electric at times.

He is one of several fascinating characters peopling this Florida town. For example the Wilkinson family is comprised of Carl, played by John Edwards, Millie, played by Nicole Powell, and their bookworm daughter, Amanda, played by Chloë Cheers. All three are marvelous, enriching the show with their near-perfect relationship. is just example text. Click to edit and add your own content. This section can be used however you'd like. Just replace the example images and this example text. 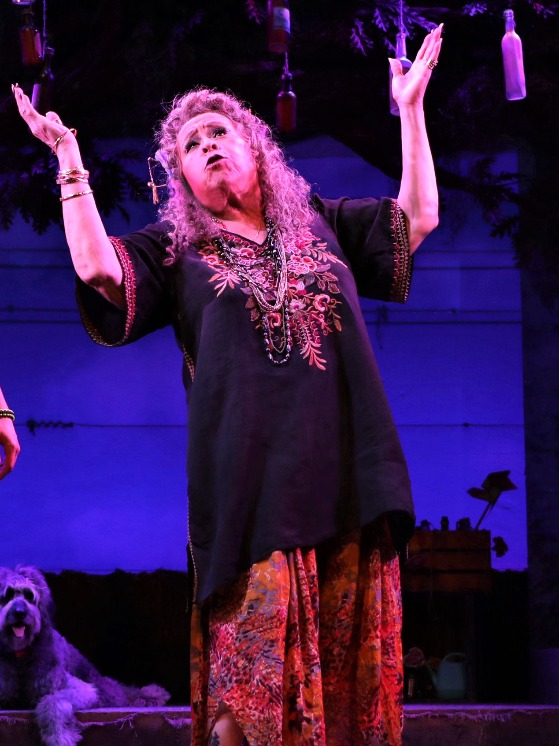 ﻿﻿﻿﻿At the opposite, negative, pole is the children's nemesis, a witch who puts people's souls into bottles and hangs them from a tree near her house. She is a hermit and spooks the neighborhood. It turns out that she isn't sinister at all, just a reclusive alcoholic who becomes a great friend to Opal and Winn Dixie. She is played by a dynamic and thrillingly musical Roz Ryan.

Ryan's long career has taken from nightclubs to concert stages, recording studios to television studios. She is a very welcome addition to this fine cast of actor/singers. She literally blew away the audience with her first act song "Bottle Tree Blues," and continued to engage them with her performance from that point on.

In a similar vein, Chloë Cheers took the audience by storm in the second act with her solo number "No One Watching" in which she sang of the frustrations of being an outsider and a smart one, at that.

Mrs. Franny, the librarian played by Isabel Keating, is a harshly endearing  adult in the story and Keating plays her with an alarming angularity that gives her a special appeal.  The kids are all marvelous actors, it turns out, With Sophia Massa especially cute and annoying as Sweetie-Pie,  Her devotion to the younger Dewberry boy was a lovely running gag throughout the show. 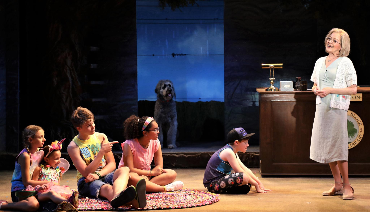 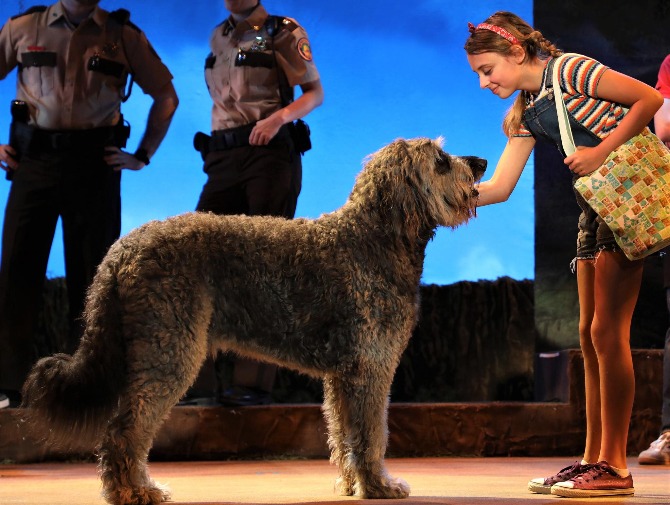 In a production perfectly directed by the very talented John Rando whose work we have seen often in The Berkshires at Barrington Stage he is ably assisted by a design team that has created on the postage stamp Goodspeed stage a brilliantly workable physical production. The malleable set designed by Donyale Werle is finely illuminated by lighting designer Jeff Croiter. The ideal costumes created by Emily Rebholz were right for the characters who wore them. The superb sound design work of Jay Hilton enhanced the storms of the Florida panhandle. But it was the projections created by Olivia Sebelsky that brought nearly filmic magic to the production.

And then there's Bowdie. He is a large, handsome dog who easily connects with the people in his stage-bound world. He has a good face, and an excellent bark and he improves every number written by Duncan Sheik and Nell Benjamin. The score is very country-music inflected but Bowdie doesn't seem to mind that at all. In fact, he seems to revel in it. This is the first musical I've ever seen in which the dog is not a featured player but is the title-character star and he is very much a star. He even gets the final, solo, star bow which he very remarkably deserves. He makes this show a must-see for any true musical lover.

Because of Winn Dixie plays on the Goodspeed Opera House stage on Main Street in East Haddam, CT through September 5. For information and tickets go to goodspeed.org or call the box office at 860-873-8668.