Once On This Island, Book and Lyrics by Lynn Ahrens; Music by Stephen Flaherty. Choregraphed by Camille A. Brown. Directed by Michael Arden.   Reviewed by J. Peter Bergman

This is just a perfect example of how very good a traveling edition of a Broadway show can be. The company manager, Jamey Jennings and the Production Stage Manager, Jamey Jennings, have kept the performances crisp and natural and the physical production in gorgeous condition. That last thing is an odd one to write as the set represents the village square after a hurricane has hit this small island in the Antilles. It has left behind a screaming amount of devastation, or, perhaps, a town center that has faced the heavy winds and damaging waters of the Caribbean. A little girl, abandoned half way up a massive old tree, is frightened out of her wits, orphaned and presented to a late middle-age couple who find it hard to resolve the concept of raising a child at their ages. It is when they begin to tell a regional "fairy" tale about a girl named Ti Moune and her difficulties that the actual play begins. It is this tale, loosely based on ideas by Hans Christian Anderson and his story of the little mermaid that the play by Lynn Ahrens begins to coallesce.

Imagine a world where Hurricane victims gather, not to mourn but to pray and dance which is how the inhabitants of the poor side of this French Antilles island suffer their fate. The rich side, that side which is less slave mindset, gather only to count the bits of property that once got away, as their French forebears would do. Ti Moune is from the former, but the man she falls in love with, Daniel, is from the latter; it is a condition where never the twain should properly meet. Circumstances under the control of four Gods, Papa Ge (the Demon of Death), Erzulie (the Goddess of Love), Agwe (God of Water) and Asaka (Mother of the Earth), however, control the possible destinies of these two young people. 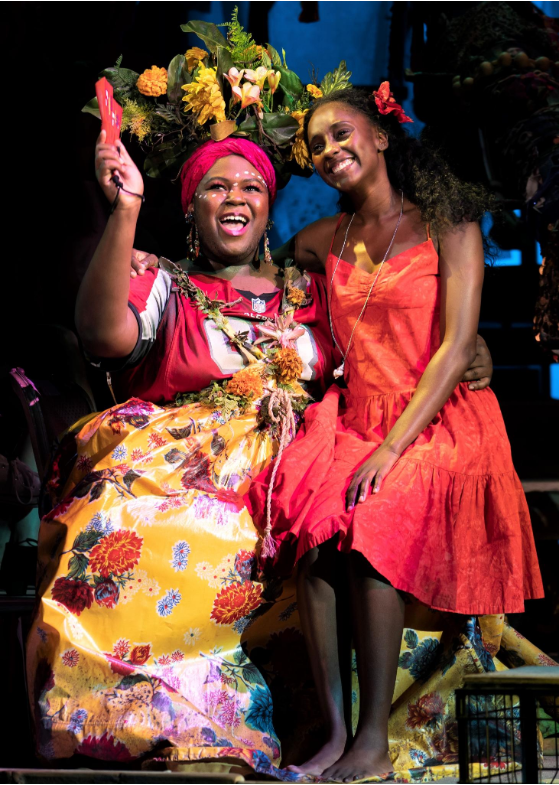 The ideal heroine is a beautiful, talented actress who dances like a dream and sings with a soprano that is so sweet she could be a Walt Disney cartoon character. Courtnee Carter is absolutely lovely and engaging as Ti Moune and fulfills the criteria of a Fairy Tale Princess in the making. With never a single false step she portrays the young woman and her idealism to absolute perfection. You cannot doubt her sincerity as she nurses the rich man back to health after a motorcar accident; nor can you find a flaw in her obviously disastrous attempt to ingratiate herself to the sophisticated yet mean-spirited rich folks at the "ball", a party where she agrees to dance for them. Carter's abilities with Camille A. Brown's difficult choreography, an intense moment in the show, is marvelous as the sophisticates abuse the girl for her powerful and sensual performance. In the ugly tradition of the one-two punch the plot thickens and sickens soon afterward. 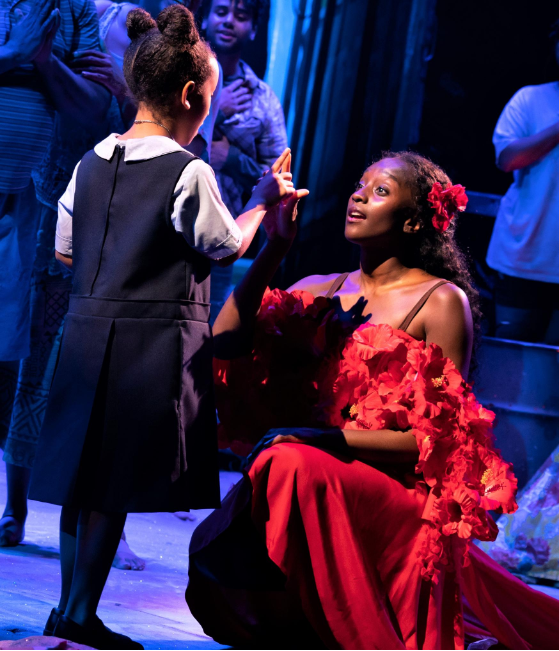 There are no characters in the play as charming as Tonton Julian and Mama Euralie, the adoptive parents of Ti Moune, played so very well by Phillip Boykin from the original cast of this 2015 revival of the show and Danielle Lee Greaves. Daniel's imperious father is delivered with a coldness that is amazing by George L. Brown.  The death demon Papa Ge is brought to the stage by Tamyra Gray and the genderless interpretation is genuinely frightening.  McKynleigh Alden Abraham is the principal storyteller and he nicely sets the mood of the play. Mimi Crossland as the little girl does a swell job and her fear of the storm is truly chilling. In fact there isn't one single performance that felt less effective than any other. As a company they play with a very solid gracefulness, a cohesive quality that  elevates this show from start to finish.

The production is intense with Dane Laffrey's scenic design, remarkable costumes by Clint Ramos and wnderful lighting by Jules Fisher and Peggy Eisenhauer. The entire team creates the Antilles atmosphere and with the very talented Briana Brooks as Audrey (not that theatrical plant), possessor of another fine lyrical voice as is Cassondra James as the beautiful Erzulie, and handsome Tyler Hardwick as the "hero" Daniel the company succeeds on every level.

All in all, this is just one of the finest shows I've seen in a while. It satisfies on so many levels: the songs and dance music are ideal for the story and the setting; the costumes add those fantasy elements that are needed; the juxtaposition of the real and the imagined, especially in the likeness to the mermaid story, are prime; the finale transformation is upsetting, harrowing and enlightening. It's the kind of show you could take the family to see but you have to be prepared to explain the explicit sex and violence. It's a show I am glad I saw at last and hours later it still seems to have been a privilege as well as a joy. 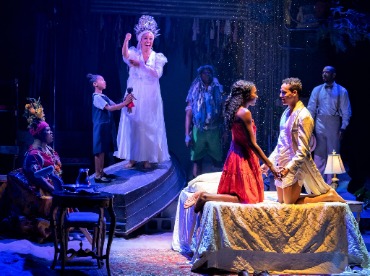 Once On This Island, ONLY plays at Proctors through today. Go to Proctors.org for full information and don't let the coming snow storm discourage you.