This is the time of year when the Mac-Haydn Theatre takes its ensemble  players, those "kids in the chorus" and lets them each stand out in solos, duets and small groups to show off their talents to an audience that has applauded them all season. As the song (title, above) from 110 in the Shade says, "I have so many gifts I have to bring to you" so does this annual fund-raising affair. Like all our area theatres do, raising money to present another season takes events like these in order to keep the actual ticket prices within reason. How that money is applied varies from theater to theater.  But know this, the show you see, is a show and a healthy one at that. 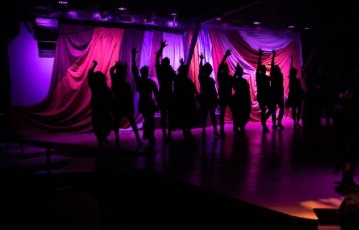 Also, as the season ends with the closing of Man of La Mancha, the company is reduced in size. Some of these people will be leaving, giving the Mac-Haydn's Summer in September season with a resident few to appear in their final shows, "And the World Goes Round," and "Beehive" sharing a smaller ensemble including a few topliners like Gabe Belyeu and Maya Cuevas to close out the season. I mention a few highlight numbers from yesterday's Showstoppers presentation Which may or may not be in the subsequent editions. The Man That Got Away, sung by Julia Hajjar, I Still Believe in Love, sung by Amber Mawande-Spytek, Fanny, sung by Chris Frazier stand out in my memory. The biggest hit of the show was General Manager Monica M. Wemitt's hilarious and glamorous  Stumble Along from The Drowsy Chaperone. This is one number I hope remains intact.