The Goat or, Who Is Sylvia by Edward Albee. Directed by Eric Hill. Reviewed by J. Peter Bergman.

One thing you never want to do is really annoy the love of your life. It invariably leads to anger, violence, and worse, revenge. Edward Albee addressed this difficult and embarrassing situation in his 2002 play, "The Goat, or Who is Sylvia?" The title is drawn, in part, from Shakespeare's song in Two Gentlemen of Verona, and is representative of the play itself: this is a story of a quest, a search for truth and journey through loyalty.

Martin, an architect on the verge of the biggest awards in his profession, is distracted and distraught over his relationship with a female - not his wife - who has totally captivated him and altered his life. Stevie, his adoring spouse, is forced to come to grips with a rival, the first she has encountered in the more than 25 years of their marriage. That the rival is a farm animal is both appalling to her, repugnant and reppellent, and  infuriating. It seems, from the second scene of the lengthy one-act play, that she might have managed a different sort of rival but that this is undeniably insulting. The new, Eric Hill directed, production at the Unicorn Theater on the Berkshire Theatre Group's Stockbridge campus is played by four remarkable actors in a remarkably compelling manner. 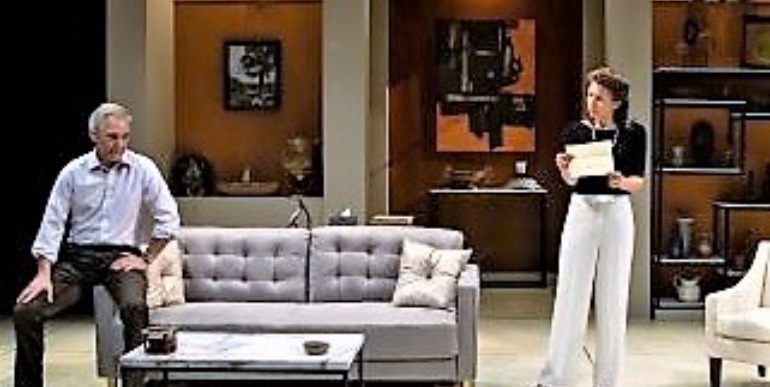 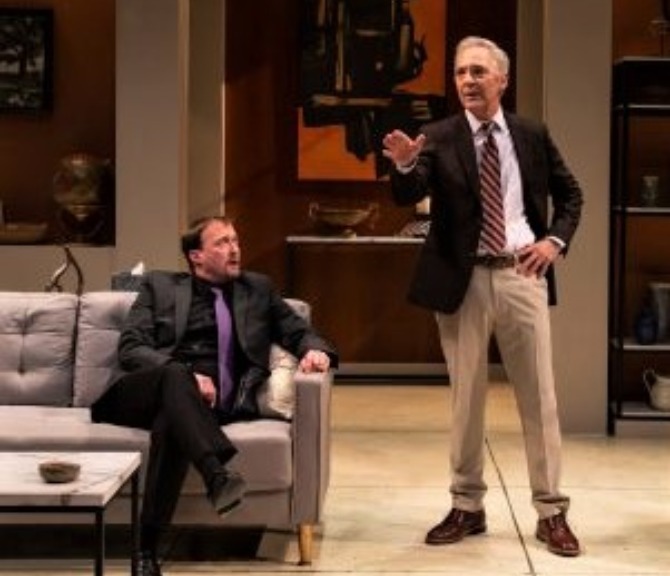 Company and audience favorite David Adkins plays the seriously conflicted Martin. His early confusion and distraction eventually changes into an almost lyrical strength and directness which give this character the ultimate physical force to confront not only his own problems but those of his son and his wife. Even her final act of revenge becomes something he can handle, though not in the way anticipated.

Martin's best friend whose well-meaning disclosure of Martin's secret to Stevie is played with expressive flair by Josh Aaron McCabe as a television reporter determined to set right what Martin has set in motion. Like many well-meant gestures this one falls over a cliff to lie splat on the ground below. McCabe does a terrific job who is appalled by what he learns and then, later, misinterprets a kiss that has gone emotionally overboard. The role is thankless and the performance of it is superb leaving Martin and the audience equally eager to set Ross's attempts on fire. It is his morality that turns a comedy into a tragedy, or worse, into an inflagration of moral indignity. 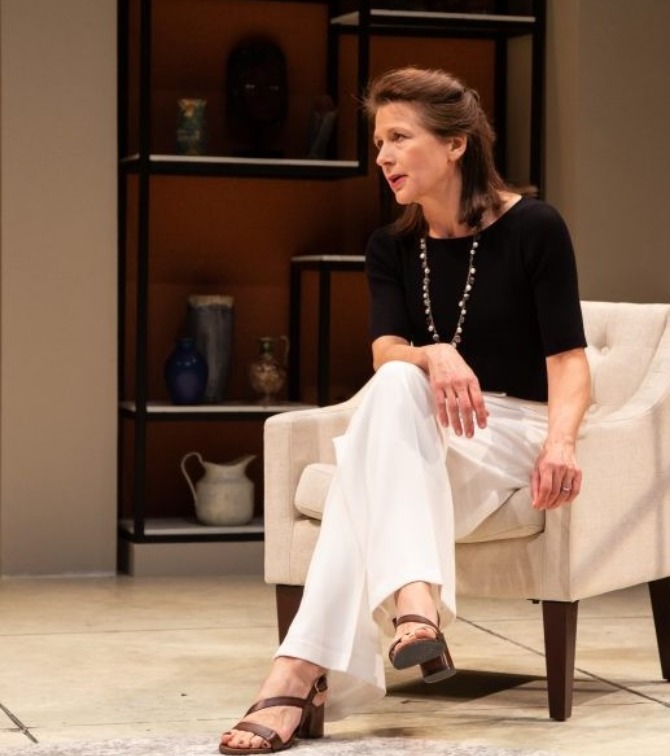 ﻿﻿﻿﻿﻿The hardest work in the play is delivered with fierce passion by Jennifer Van Dyck, fast becoming my favorite actress of the year. Her performance last season as Mrs. Chisholm in The Petrified Forest blew me away with her angst-ridden confession to a diffident husband. This season her husband, Adkins as Martin, is a totally different kettle of fish for her to fry. Here her joking, self-deprecating wife becomes the fish-wife of all time, ranting, raving, tormenting herself, her husband, her son in almost equal measure and in different ways.

Mercedes Ruehl who originated the role turned herself from a character actress into a star and Van Dyck's performance could be a game-changer as well. Her handling of Albee's exquisitely realistic, yet poetic, language is remarkable and in her hands each word lingers a moment to provide its own impact.

This is a very physical role and the actress is equal to the challenge with an indication of reserve forces that are emotionally crippling as we wait for one more attack, one more rejection, one more hard to swallow reaction to the realities that now are coming to dominate her previously perfect world.

Her performance alone resonates so much that I would pay to see the play a second time just to watch a consummate actress enliven a play that devastates the soul while it amuses the mind.

Eighteen year old Billy, is gay, outspoken and devoted to both his parents, though his mother-love dominates. He is unable to control his fury over his father's situation and when he does come around his intentions become corrupted and peculiar. All of this is very well played by Evan Silverstein who touches the heart as well as the mind, something the adults cannot quite make work. This intellectual adventure into alternatives in the relationships that matter comes full circle with Billy and Silverstein is definitely up to the challenges of the play. As the alternative outsider to Ross, Billy in this production is an odd reflection of Martin and his deviance from normality. He completes the picture of a man facing crisis and he plays things just the way they should be played. 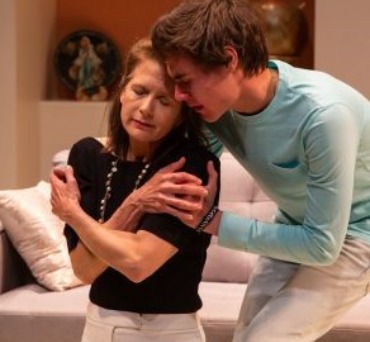 The play ultimately rests on the shoulders of Martin. It is his story and how others react to it that hold center stage. David Adkins, who understands levels of performance, is given the large challenge of arranging his emotions from the low end of confusion and disinterest to the highpoints of personal revelations and emotional outbursts to that awful middle ground of diffidence and disillusion. The actor is more than up to the challenge, he seems to actually challenge himself to hold to one sense of himself when another view is necessary; when he moves to where he emotionally should be he is instantly set another challenge and the actor approaches it brilliantly. Martin is ever-changing and Adkins handles it in a way that keeps our attention focused on him even when Van Dyck is holding forth with wildness and passion. It is hard not to refer his work here as "personal best," but I cannot say that everytime I see his work - or can I?

The physical production at the Unicorn is strong and sturdy.  The excellent Randall Parsons set, the ideal costumes by Yoshi Tanokura and the occasionally quirky lighting designed by Matthew E. Adelson complement the fine, nearly exquisite, stage direction by Eric Hill. Hill uses broad strokes to show us the subtlety in Albee's play; he also uses the small things, his actor's reactions for example, to give us big changes in the inner workings of all four characters. In this play he especially exhibits the strength he brings in working with actors on parts they may not realize redefine them.

The resultant production with sound design by J. Hagenbuckle, provides a rich, and richly deserved, intense evening of theater that proves once again how intelligent, creative and compelling a playwright was Edward Albee. And even with Greek theater evocations, this play is one for the masses - after all, who hasn't loved without considering the consequences only to find that love takes its own toll without any warning. 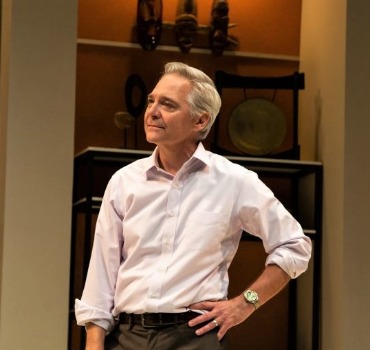 The Goat Or, Who Is Sylvia? plays in the Unicorn Theatre on the Stockbridge campus of Berkshire Theatre Group through June 15. For tickets and information go to berkshiretheatregoup.org or call the box office at 413-997-4444.