On The Exhale, by Martin Zimmerman. Directed by Colette Robert. Reviewed by J. Peter Bergman.

"On the Exhale" is a one hour and eight minute monologue by a woman who has lost her second-grade son in a school shooting. She is basically inconsolable yet she manages to work through her day, concoct a sort of revenge, and reflect on her losses without end. This play is a monologue, my least favorite sort of play I must admit up front, and it doesn't require the actress to do much more than memorize the script and its peculiar format in order to give the performance. Tara Franklin does just that and presents the story from that single point of view. She does an extremely good job of it, but even so I couldn't maintain my concentration.

Unlike other mono-dramas in which the actress gets to use other voices and portray other characters, in this play the single tone is from The Woman who narrates her tale of happiness lost, revenge and losses. She never has a chance to playing anyone else. Most of the lines spoken are short sentences, mostly declarative and rarely very expressive. Considering her experiences recounted this woman could be passionate and get worked up and show some emotion but the relatively little expressiveness in the delivery is couched in frigidity, a coldness that becomes hard to hear.

Zimmerman's play is a lengthy poem and that form, which can be moving - witness Edna St. Vincent Millay's "The Murder of Lidice" which contains passion, fear, anger, rage, revenge and more - but the author has left out those things that move a listener and kept a sense of emotional control for the the character of The Woman, an unfortunate choice I feel.

Franklin is far too good an actress to lose herself to monotony, which, I'm afraid, is where this play takes her. Directed by Colette Robert the actress is wasted in this material. Now and then she gets worked up enough to raise her voice, but the lines leave her relatively subsumed by vocal inertia. Here is a sample from the script:

"And while you don't disagree

you still sense a haughty superiority

in their gestures of support

a message beneath their bundt cakes

'If you'd just listened to us

if you'd taken our advice when you had the chance

well, you wouldn't be alone right now, would you?'

As if another body in your bed would blunt the pain."

﻿﻿That's about as potent as it gets. Franklin says the words with warmth but there is no intensity. It's a story that moves people but it never gets really to where it should be. 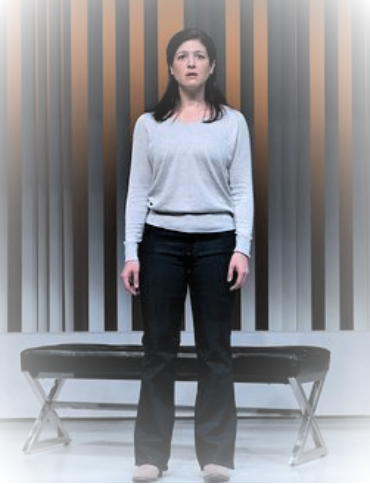 On the Exhale plays at the Chester Theatre in the Chester Town Hall, 1 Middlefield Road, Chester, MA through August 4.  For information and tickets go on line at chestertheatre.org or call the box office at 413-354-7770.