"And an angel gets his wings."

At the end of theRep's winter production of  "Live From WVL Radio Theatre: It's a Wonderful Life," there is a kiss. It is the moment we have been waiting for and it is almost satisfying. The only reason it isn't is it isn't the end of the story. That takes place just a few minutes later when the radio theatre company has finished the over-cloying end of the story they are telling on the radio in 1948 to their listeners, ostensibly snowed in at home. Lee wright, the sound-effects guy who is in love with Evelyn Reed, the boss's daughter, has just played George Bailey opposite her and he is overcome with emotion about this experience. When they kiss for real, the melodrama and romance of the evening's show drops off the edge of the stage and their true emotions play out, while their real story whose "ending" has yet to occur replaces the fiction they've lived within for two hours. While I have never been enamored of the film, this version of it touches me and moves me and for a while it is a wonderful life.

All four of the radio actors have actual other jobs but to stem disaster and the possible cancellation of their contracts, they each are forced to take on a variety of parts, occasionally playing opposite themselves in key moments of the play.  Having worked on Radio for several years I can sympathize - I once surrendered Alaska as a Russian General to myself as an American Colonel.  I also played 100 men on a ship off the coast of Alaska in that show and so I do sympathize with the quartet of players as they embrace their outrageous tasks. The character of Kitty, played here with elan by Laurie Wells, plays the film story's "bad" girl, her own admirers and a few other cross-gender roles. She is just plain marvelous in this show, especially in the final scenes where she learns that her own romantic secret is known to just about everyone and she can be freed from the edgy guilt she carries; at this moment subtlety is tossed away and delicious lust overtakes her. We delight in her joy at bringing each new character she plays to very specific life.

As her paramour H. Christopher Mays, Wynn Harmon starts out as a stuffed shirt and ends up, miraculously, as a warm, loving, sharing and just plain adorable man who has played both the sweet and dopey folks in the show as well as the angry, dirty-minded greedmonger whose dishonesty threatens to destroy everyone in his town, most especially George Bailey. 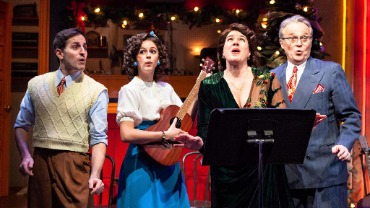 The woman who starts the emotional rollercoaster ride is Evelyn Reed, the station owner's daughter who has received a telegram announcing that he and the actual company of players have been sidetracked by a heavy storm and they cannot arrive in time to perform, a performance needed to save the station. She is a heavyweight hysteric who goes on to become the lovely leading lady and character woman as well. Played by Elizabeth Nestlerode (whose last name inspires the mind to think of a dessert delicacy spiced with rum, vanilla pudding and chopped cherries and nuts) Evelyn is an attractive example of the classic amateur whose professional chops emerge as needed - just think of Ruby Keeler in the film 42nd Street. Nestlerode is wonderful in the part and it is a joy to watch her transition as she learns to act as she goes, her native talents coming to the fore as she saves Daddy's business and saves the show.

It becomes clear moment by moment that this duckling turned swan must be loved, must be kissed and that task falls to the sound-effects man turned leading man, Lee Wright. 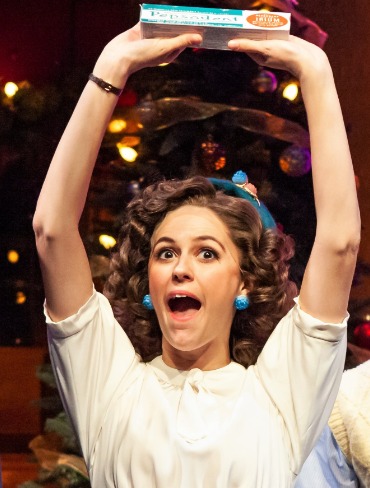 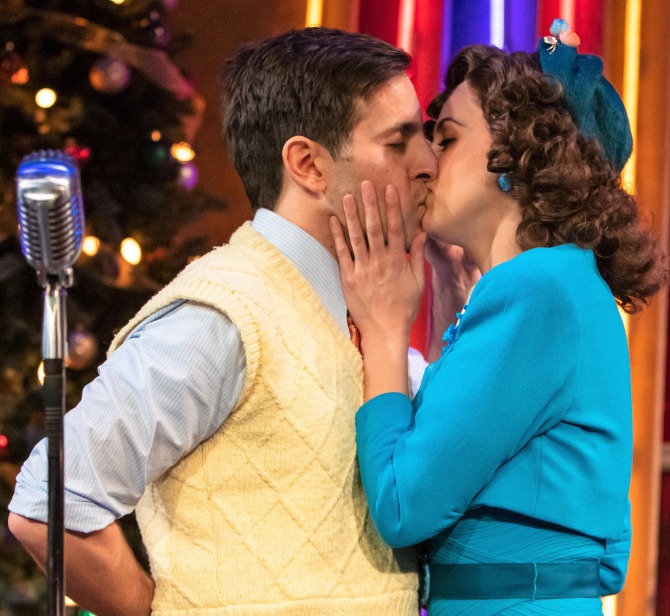 Lee is played by Carl Howell, the man whose face alters along with his voice as he switches from character to character.  One joy of radio acting is that only your voice carries to the audience, but for an inherent actor the body and the face define the person being played and so more than the others, Lee adapts to his various people. Howell is just marvelous as he reshapes himself every several seconds. He seems to do it effortlessly which makes his work so much more fun to watch. This is perfect casting borne out by a talented young actor.

Two more men are on stage, Josh D. Smith as Mr. Shirley, the radio station pianist and Harry Lumb as Harry the bass player. Musically they add the right touches to the show and in character Smith adds a bit of bluster now and then that keeps the show solidly in its time period along with the many sung commercials that took me back to my childhood days: Pepsodent, Pepsi, Chiquita Banana, to name a few

The physical production is grand with a perfectly clumsy studio set designed by David McQuillen Robertson, excellent costumes byEvan Prizant and and practical, boisterous lighting designed by Rob Denton. Rider Q. Stanton's sound design keeps the show beautifully settled in its holiday setting. Margaret E. Hall, the director, has done a fine job with her cast in creating every character and every character they play (over thirty of them, I think) and with choreographer Freddy Ramirez has kept the actors moving so much to accomplish so many things the the time flies by and leaves us, the audience, exhausted from all this movement.

I've seen other productions of this play and this one is absolutely great, a fun way to usher in the Christmas season.

Live From WVL Radio Theatre: It's a Wonderful Life plays at theRep (Capital Rep), 111 North Pearl Street, Albany, NY, through December 22. For information and tickets go to their website at www.capitalrep.org or call the box office at 518-445-7469.