"You'll be back, Like before, I will light the light and win the war."

King George of England, in a light and amusing ditty, sings the line above from his distant castle where the newly christened Americans cannot hear him. It is his philosophical, and whimsical, take on what's been going on across the seas in the new world. Americans may not have taken him up on his theory, but I do believe that anyone who has seen this musical about Alexander Hamilton, the American Revolution, and the early evolution of our land and its basic philosophies, has, wants to, or will be back for more about the war. The song, one of the more memorable musical moments in the show, comes back twice. And, it is so good you actually go out humming it relentlessly. When have you had that happen in a recently written musical?

The 2015 Broadway hit, still running at the Richard Rodgers  Theatre in New York City, has been touring for nearly a while and is currently in Schenectady, New York at Proctors Theatre. On the press opening night the title character was played by the understudy and he was so good it is hard to imagine anyone better.

Alexander Ferguson has a terrific voice and stunning delivery that makes him both an ideal romantic lead and a dynamic character. And when you add in his ability to make every line delivery tell the story he needs to bring out, there is only one possible conclusion: he should be doing what he's doing, playing the lead role. His lyric tenor voice is glorious and his dancing is just what choreographer Andy Blankenbuehler would expect.  This dance-master keeps his company moving most of the time, so even when a small scene is playing there is a surround of people moving, bobbing, weaving, jumping and twirling on the large stage at this theater.

Movement plays a large part in the fascinating stagework that is "Hamilton."  The play covers a vast emotional and physical experience in our nation's history.  Hamilton's role in the goings-on of such vintage characters as Aaron Burr, George Washington, Thomas Jefferson, Abigail and Eliza Schuyler, James Madison, Marquis de Lafayette and a host of others, is devastating. He becomes our first national treasurer, he creates the New York Post and invents the American Coast Guard. He almost becomes President before being shot in the most famous duel ever to take place in America. The musical charts his course from his orphaning in the Caribbean to beyond his death in New York.  It's a long, but super course of life, in this musical version.

﻿﻿King George, appropriately the comic relief in the play, is portrayed by Peter Matthew Smith as a self-centered idiot and the humor of this works beautifully. George's historic outlook on the life of the "colonies" is wonderfully played here in the three brief appearances Smith has to inject some much needed humor into the hard story of the Revolution and its proponents. Each of his appearances was successful.

As the Schuyler sisters, Angelica and Eliza, Stephanie Umoh and Hannah Cruz are marvelous. Singing together or separately about their devotion to one another and to Hamilton, they make beautiful music. They also often seem to float a few inches above the stage which gives them an often ethereal appearance which explains a lot about his interest in them; they are not totally human creatures in this show.

Third sister Peggy is played by Olivia Puckett who also plays Hamilton's mistress Maria Reynolds, the woman who almost takes away his credibility. Puckett is a delight in both roles.

Josh Tower plays the narrating Aaron Burr with a fine swaggering manner that is both encouraging and chilling. Bryson Bruce is a very amusing Thomas Jefferson, post France.  Paul Oakley Stovall is an impressive George Washington. Jon Viktor Corpuz is a grand Phillip Hamilton at his many stages of growth starting at age nine. 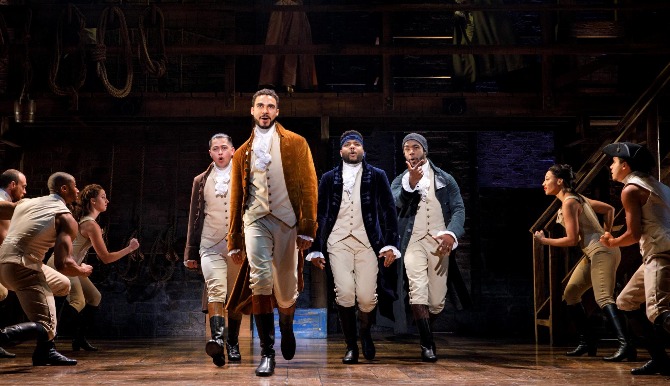 ﻿﻿﻿﻿The physical production is superb using floating stairways and a double turntable designed by David Korins. The costumes, 18th century and 20th century styled are by Paul Tazewell, and the first-rate lighting is by Howell Binkley.

From the uproar each musical number achieved you would think this was a rock concert, which it most certainly is not. Miranda's styles range from rap to romantic ballad, to lullabye, to choral music.  It is a complex and very singable score which absolutely makes the audience want to come back, as the lyric suggests, to be back with these talented folks telling this interesting story in this fascinating way.

Hamilton plays at Proctors, 432 State Street, Schenectady, NY through August 25. For information or tickets go to their website at Proctors.org or call the box office at 518-346-6204.