This is the absolute highlight comedy by William Shakespeare. It encompasses 20th century burlesque, vaudeville, farce, situation comedy and just about any other comic form you can mention including a bit of stand-up along the way. In the new production at Shakespeare and Company, in Lenox, MA - in their newly redesigned Roman Garden Theatre - there is all this and more, for The Bard of Avon includes romance, rivalries, a bit of sword-play and some outrageous cross-dressing in this work. Directed by Kevin G. Coleman the play is a non-stomp romp for the company with hilarious sound effects, silly costumes and make-up, and a Carol Burnett sense of running gags and slapstick. To quote Noel Coward: "I couldn't have liked it more."

Two best friends, married women Meg Page (MaConnia Chesser) and Alice Ford (Jennia M. Jadow), receive love letters, identical love letters, from Sir John Falstaff and conspire to embarrass and even humiliate him for this insult. It takes them a while to carry out their plan, but over the course of three assignations they manage to fulfill their intent. How they get there is half the fun of this play and Kevin G. Coleman's very funny visuals make each silly moment a treasurable one. This is ancient Britain and Falstaff's appearance in the history plays inspired the first Queen Elizabeth to request a comedy about Falstaff from the playwright. He took that request seriously and this show emerged. It is filled with 16th century sexual innuendo (don't worry - you'll get every jest and gesture) along with the awkward rival planning by the elder Pages to marry off their daughter Ann (Jordan Cobb) to the most unlikely suitors.

While strong female characters abound - I mean, this is the merry WIVES show - it is still Falstaff who dominates the play. Nigel Gore is delicious in his overstuffed body suit and his "Kiss Me, Kate" Petrucchio costume. This actor knows how to play a boor and make him lovable. Less pomposity than usual and a bit of edginess gives Gore's Sir John a reasonable reality and keeps him from just being everyone's idea of a parody human being. He is very funny in the role and keeps up the interest when it becomes clear that this knight is about more than the night; he has and shows his daytime hours as well.

Among the other men who make a mark are Martin Jason Asprey as Frank Ford, Steven Barkhimer as George Page (the not so merry husbands), and Glenn Barrett as the Frenchman, Dr. Caius. Asprey is at his blustery best, especially when in disguise, while Barkhimer is the calm eye of the rising storm. Barrett is delightfully funny as the elder statesman in the line of suitors who is pompously ignoring his unsuitablity for the role of swain. 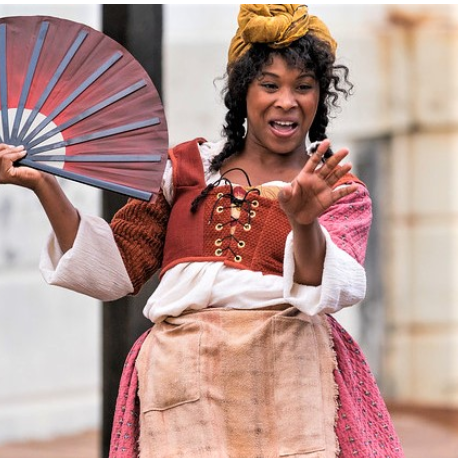 Naturally the go-between and chief conniver, Mistress Quickly, is unimaginably gorgeous when played by Cloteal L. Horne who maneuvers about the playing areas with her flicking fan, her mini-turban and her bright, flashing smile.She is the best Quickly I've seen since Jeanne Moreau in the Orson Welles film.

Chesser is hilarious as Meg Page. She has a moment in the second half that is absolutely classic as she plots the runaway marriage of her daughter.

Ann Page is played with flirtatious style by Jordan Cobb who also doubles as the Hostess, another plotter working more for herself and her pleasure than for any of the men and their gold.

Jennie M. Jadow plays Mistress Ford with a determination to bring her plans to fruition. She is her funniest when teasing Falstaff with her nearly naked ankle. She is at her best when putting her husband in his place for ever suspecting her of any infidelity.

In this play with no straight man, the company has chosen some truly funny people to inhabit Shakespeare's silly characters. Bella Merlin is a notable Sir Hugh Evans milking a laugh out of every line she speaks. Madeleine Rose Maggio instills fun into both Robert Shallow and Bardolph, Falstaff's former personal servant.

Gregory Boover doubles as two of Ann's most ardent and potential husbands: Abraham Shallow and Master Fenton.  His Shallow is a giddy, schoolgirlish figure who has trouble finishing a sentence or communicating a thought. Boover's legs often seem to be moving in the opposite direction from his body and his giggly portrait is orally fascinating as actual words come through the giddy laughter.  His Fenton is the perfect romantic with a mole on his brow that grows exponentially through the play's constant plotting to keep him away from Ann.

On the technical side Coleman has used some classic comedy concepts that at this late date should be ridiculous, but he has used them so perfectly that they get their laughs and that reaction continually grows each time he employs them. He is aided by sound designer Amy Altadonna who plays this sound game to absolute perfection.

Kiki Smith's costumes do exactly what costumes should do in a play like this and the a vista costume changes bring about their own degree of laughter as does the use of visual stagehands at times. Coleman's use of reaction here is a brilliant addition to the mounting humor of the work.  Jim Youngerman's set is a part of this joke and his concept for the play is lovely and adds to the overall enjoyment of the play. Kristin Wold increases her influence on the company with her original score and her faerie whisperer effects.

Even if you think you know this play you owe it to yourself to see it in this version. It is a perfect way to move from the workaday world into the enchanted atmosphere of a Berkshire evening.

The Merry Wives of Windsor plays in the Roman Garden Theatre on the Shakespeare and Company property at 70 Kemble Street, Lenox, MA through September 1.  For information and tickets go to shakespeare.org  or call the box office at 413-637-3353.