based on his The New Yorker story The Confession

﻿"What if I remind you of your mother? What if you want to kill me?"

Jack Flash is not easily dealt with. Part of the title of a 1986 Whoopi Goldberg flick  "Jumpin' Jack Flash" and a 1968 Rolling Stones song, is also a sativa-dominant hybrid marijuana strain more energizing than calming. Set in 1990, the second character in Alec Wilkinson's new play "Sister Sorry" is also Jack Flash. We can be pretty sure that the 28 year old man is not really named Jack Flash but uses the name to send a message about himself. Sister Sorry, also not her real name, is sending messages out herself: "Call my number and leave a message: confess something about yourself that you wouldn't ordinarily tell anyone. It can stay a secret or anyone else can listen to it. Your anonymity is guaranteed." This 78 minute play, now on stage at the Barrington Stage Company's Boyd-Quinson Theatre on Union Street in Pittsfield, Massachusetts, is a most unusual play. Set deep in the memory of an artist, a former vandal, and former thief the play tells the story of these two societal outcasts whose lives are intertwined through her answering machine art. His telephone confession that he has killed his mother acts like a drug with her and instant obsession with him leads her close to her becoming his next victim as he stalks her aurally and visually while she searches for the answers to his unspoken questions. The fast-moving play toys with us as the author, Alec Wilkinson, teases and  taunts us with the truths, half-truths and lies that fly around the stage until it is impossible to segregate them all. If this is art it leaves us starved for a glimpse at what Sister Sorry, thief, vandal and manipulator, is up to now. 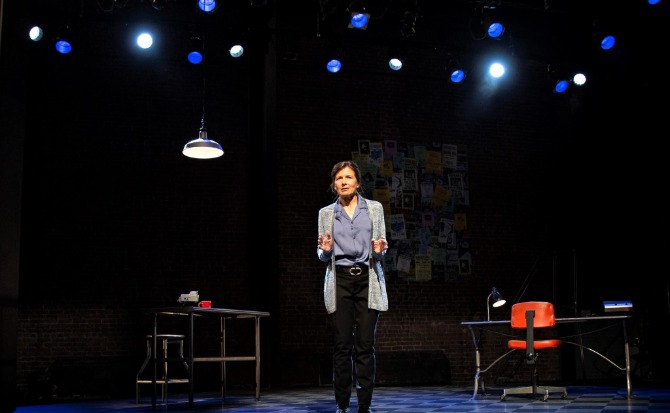 Jennifer Van Dyck plays Sister Sorry. Her superb diction leaves us hungry to hear more facts, more story, more memories spoken with an English that we can feel in our own mouths. She is marvelously Mesmeric when she speaks.  This gives her words a truth to the ear that may not be truth after all, I suspect that if she chose to read the Bible while facing upstage we would not be able to walk away. But in addition, her body language, her face, body and hands, would keep us delighted for at least 78 minutes. As the actress playing Sorry and as the narrator telling us the story she is equally captivating. On a set (uncredited) "based on a set design" by Mikiko Suzuki MacAdams Van Dyck circumnavigates Sorry's world, only pausing for a moment to glance over her shoulder hoping to find her personal portion of Jack Flash (the drug or the man, it's sometimes hard to say). To watch her exhibit her growing obsession with Flash is just exquisite.

Jack Flash is played by Christopher Sears in a startling and alarming manner. He brings a volatile energy to the role in even Jack's sweetest moments. His work is just an example of what it takes to juxtapose charm and threat in a single moment. We believe his story, his confession, of matricide even when the evidence against him proliferates.  Sears is so sincere in his playing of this role that if I bumped into him on the street I would probably jump in fear. As Jack he certainly motivates the telephone voices played by Felicia Curry, Mark H. Dold, Kathleen McNenny, Chad Vann, and Peggy Pharr Wilson (taped so she can perform live in BSC's BOCA at their other location with Debra Jo Rupp and others). Sears moves  through his role getting creepier along the way and finally explodes with an unerring vehemence. It's quite a performance, battling Van Dyck's for supremacy. 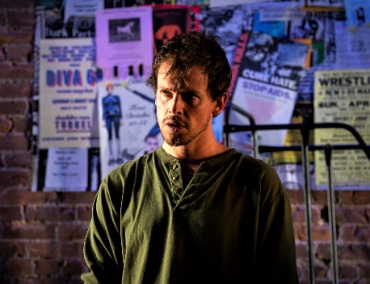 Debra Kim Sevigny's costumes work for "the present" and for 1990 equally well. David Budries sound design is more than suitable for this play. The midnight of Sister Sorry's mind is boldly painted dark in David Lander's lighting design.

The play has been staged by Joe Calarco whose abilities with stagnant writing are well employed here as nervousness and hot sexuality prove the right element to move these two players about. They are rarely intimate as the script keeps them apart. Calarco has found ways to bring these two - who never meet - into that rare heat of sensual passions. Even in her remote narrative moments he gives the visuals of the relationship credence and power..

Sister Sorry is not just another play in this crowded summer season. This world premiere production has given us a thought-provoking experience that keeps us clutching our seats and gasping at its surprises.  Back in my youth movie theater seats were sometimes wired to give us a shock at just the right moments. Those seats are not needed here. The shocks come, generated by our very real reactions to this startling, sometimes confusing melodrama. It is a consistently interesting experience in the hands of three very talented artists, a lighting designer who understands the melodrama form and a stage manager, Amber Johnson, who understaqnds her job and executes it perfectly. Barrington Stage has to extend most of its shows this season and this one might join the others. It certainly should. 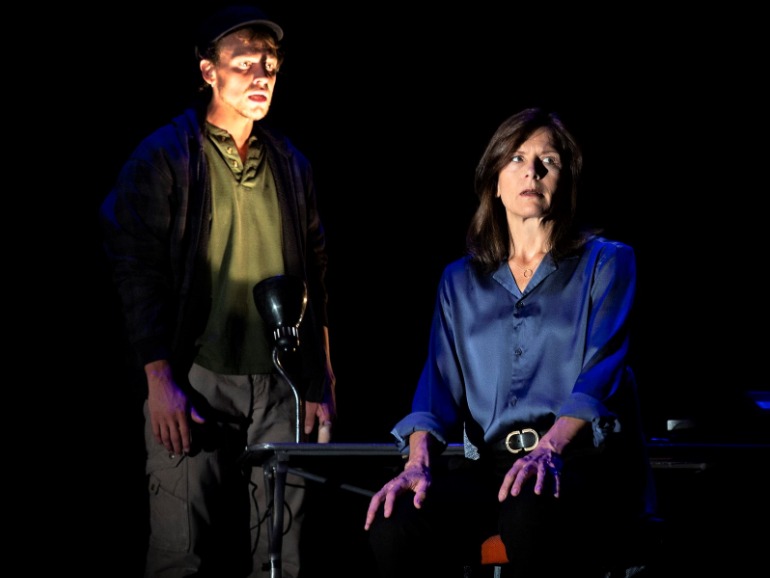 Sister Sorry continues at the Boyd-Quinson Theatre on Unioin Street in Pittsfield, MA through August 29. For information and tickets call the box office at  their website, www.barringtonstageco.org.