There is little as exciting as finding a new play and that is what The Theater Barn in New Lebanon, NY has given us as the first play of this new season (after a year of no plays of any kind). Harrison Zeiberg's play "We the People" is just what you might suspect from seeing its title: a play about the constitutional convention of  1787 reduced to just a few basic characters, the men who forged the Constitution that has ruled our country's since its inception shortly after the American War of Revolution. George Washington chairs the meetings organized by James Madison and Alexander Hamilton (not a music-man this time around, just a sullen, withdrawn patriot). They are joined by Benjamin Franklin, Gouverneur Morris, Charles Pinckney, Roger Sherman and Washington's personal slave Billy Lee. These are the characters the author has selected from the large number of delegates and so, in order to present a historically almost-accurate account, the drama leaves out some important members, but it really doesn't matter - after all this is theater and not a history lesson.

What is truly exciting here is that this five performance staged reading of the play is highly theatrical, with set, costumes, sound and lighting, and it gets a needed and deserved airing in front of an audience and its reactions. 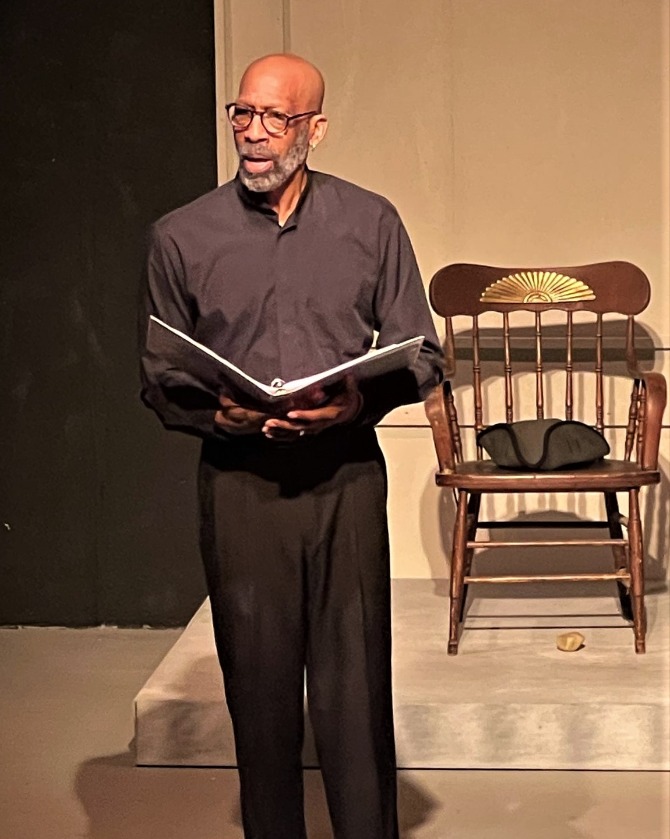 The play has been staged by Sky Vogel who manages to move his actors in a most theatrical manner, grouping characters where needed and then giving us a panorama of separatists when it is appropriate. The slave, Billy Lee, is always against a wall upstage right of his master, George Washington, unless he has been sent somewhere. Played by Emmett Ferris, the character is a basically silent but highly relevant image of the confusion that the Constitution-conceivers are faced with. As with the Declaration of Independence there are two sides to this human/half-human symbol of the difficulties this country has faced for over four hundred years. Billy is a man raised to do what is expected of  him, but he is also a man with rarely exacted feelings and opinions and the playwright has given him a chance to express  both of those things eloquently and relevantly. The writing of this speech is almost poetic and, unfortunately, the actor and director have not taken full advantage of the opportunity the author has given them.

Ferris is excellent with what he does but the speech could take him, and us, so much further along the road to true expressiveness. It is a shame that just when the play brought eloquent relevance to bear (in these post-Trump days) the reading lets us down. Still the words themselves take us pretty far into a reality that has never left us in spite of everything this country has managed to do. ﻿﻿

The principles in this play, still debated today in spite of the attached Bill of Rights and the many amendments made afterward, are debated by the two principal actors in this melodrama of politics: James Madison who conceived the Constitution and Alexander Hamilton whose strong feelings about its contents rendered him too often tongue-tied. Joseph Sicotte portrays Madison and John Segalla plays Hamilton. The two men do well with their roles, although Segalla does a bit better. Sicotte needs to pick up his cues faster and with greater force. William Squire plays General Washington with a naturalness that sets him apart from the other actors. He has moments when you can just hear the war-hero speak for himself.
Many of the finest moments are delivered by Phil Rice playing Benjamin Franklin. His best lines are lightly satirical and he delivers them adroitly with a light sound of personal humor in his voice. He was quite believable as the elderly Philadelphian.
Equally remarkable is the Charles Pinckney of Ryan Palmer whose southern accent slipped a bit but whose fervor was often intense. He allowed his character from South Carolina to emerge full-blown from his first entrance and his southern attitudes to overwhelm when necessary. 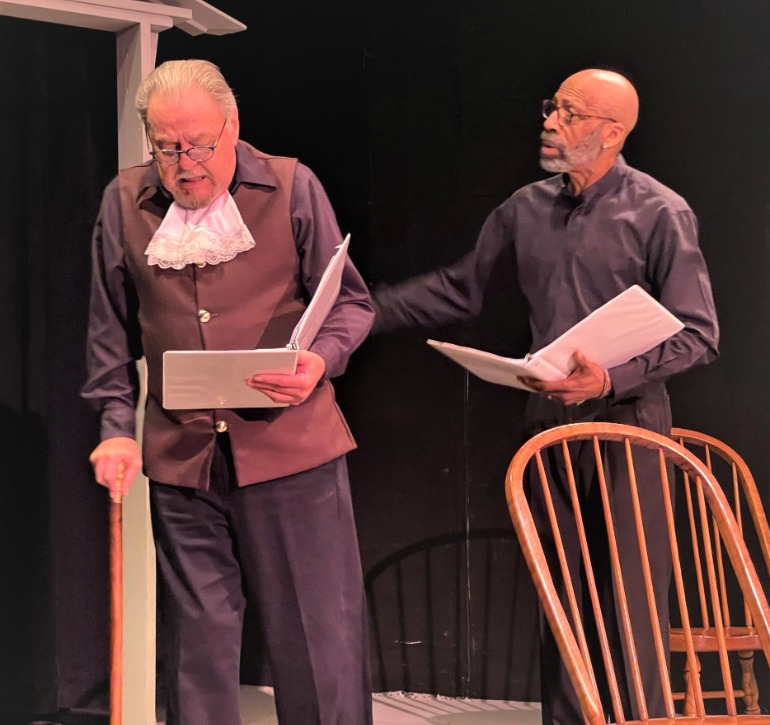 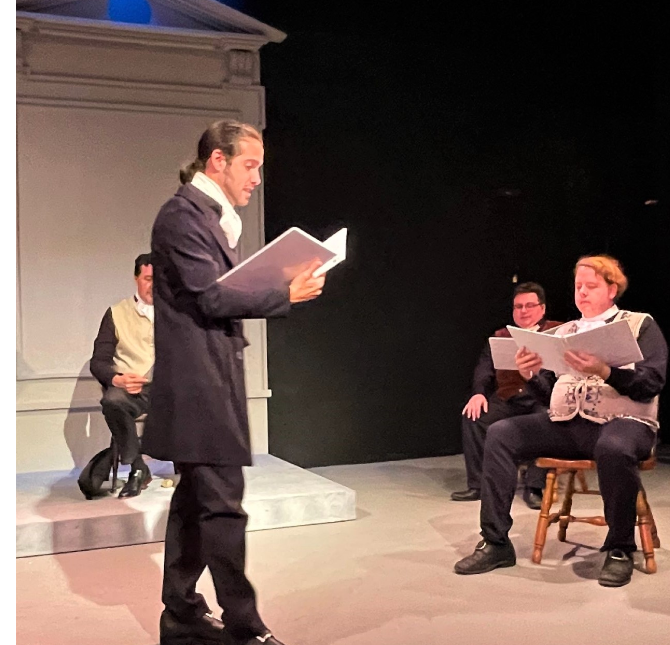 John Trainor's Sherman and Samuel Zeiberg's Morris make unattractive allies, just as they should. Basically on the same side of the issues, these two characters do not speak the same English and the contrasts are just fascinating to hear.  The company's work is perfectly garbed in costumes by Kara Demler on a Sam Slack designed set that is definitively Philadelphia. Joseph Sicotte's sound and lighting design work aids the play but his scene change music could end more gracefully.

This is a play that needs to be seen and heard and reacted to and a performance in this form, white binders in hand, works as well as it could.  If you love the theater and want a chance to see a new work at its early-stage best, this is just for you. It only plays through this weekend so don't hesitate. Call the theater now and reserve your tickets. You won't be sorry you did.

We the People only plays at the Theater Barn, 654 Route 20, New Lebanon, NY through June 6. To order your tickets contact the theater at 518-794-8989 or go on their website at TheTheaterbarn.org.