In 2001 Kenneth Lonergan's play "Lobby Hero" pemiered for a very short run off-Broadway - it played for only a week, while pretty much the same fate awaited the play in London and then on Broadway. Now, 18 years later, the play has achieved a kind of cult status and in the new production at Capital Rep in Albany, NY, the play proves to be quite effective. The story of a young female NYC cop and a security guard in a high-rise apartment building on Manhattan's upper east side, it should reek of its period, but it doesn't. Instead it emerges as a classic, almost timeless play with an extrordinary resonance for our concluding decade. With its undertones of #MeToo, the catastrophic Trump era and the wishing tones of pre-and-post trumatic shock syndrome the play presents a fine-tuned photograph of our own time as if to help us navigate the current run of troubles.  And it's a play, not a musical. 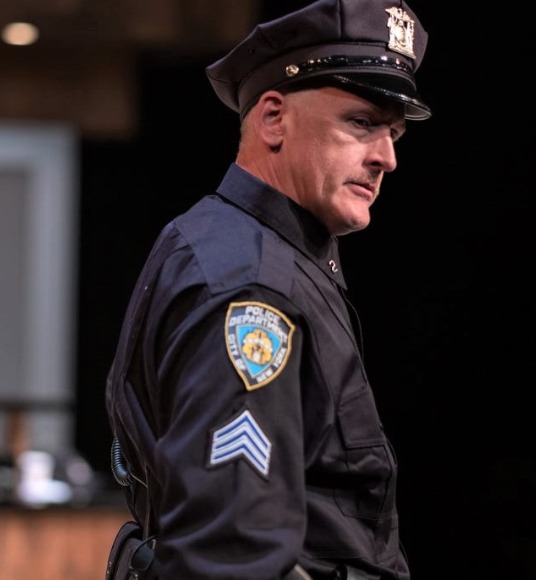 In this play concerned with situational relationships, the police sergeant is having an affair with a married woman who lives in the building. He expects his partner, a newbie, to support his bad behavior, but the young rookie is not interested. In an effort to maintain some position with him, she has already had sex with him, and now she realizes that this behavior  is going to have to continue in order for her to stay on the force. Clearly, the force is not with her.

As Bill, her superior, Mark W. Soucy has to be non-stop over-the-top while always underplaying the man's inherent anger and control. He is always caught between the two personnae: professional pressure vs. personal righteousness. He walks a slender fence rail of balance here and always appears ready to fall one way or the other. Soucy is fascinating to watch in this role. His seeming straightforward attitude masks a deeply hidden hardfelt need to command other souls to comply to his needs. He has definite moments when he could become violent and that undercurrent prevails throughout the play. Soucy is chilling as the nice guy and has an amazing draw on the psyche. Playing the most complex character in the story he is as successful on the stage as his character is in the play, right up to the moment when he discovers his control isn't everything he assumed it to be. At that point Soucy conveys the source of madness in Bill and almost lets it through to live in front of us. 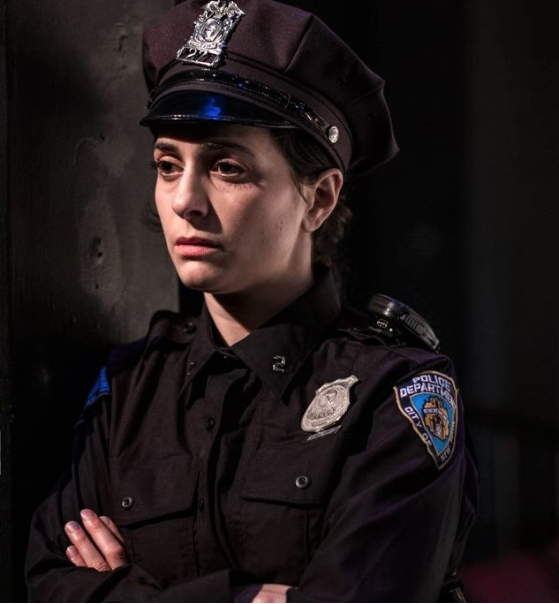 The principal target of all this control is the rookie, Dawn, who feels everything that Bill is and has within him, but she has not found the means with which to stop him, control him, protect herself. She is a young cop, an ardent believer in the calling she feels to "help" people. When she moves against her older partner she is shunned and left in his grasp to become whatever he conceives. There is a sort of madness in this, and it becomes more than she wishes to handle. It is another sort of "rape" as she protests and she doesn't have the wherwithall to withstand this battle.

Dawn is played by Sarah Baskin whose own strength is seen in her weakness based on principles.  Baskin gives her character backbone and a moral sernse that is strictly baased on the religious moral codes of active youth. Dawn's background is left sketched by the author; we don't know as much about her as we do about the three men in the play. He leaves us to guess about the background of this woman and as we learn her history we are left without guideposts to her character. It is only in her actions, her difficult decisions , that we get to know her at all. Baskin is adept at her emotional striptease, leaving layer after layer of her strict solemnity upon the lobby floor In this play with three very different men on stage, it is this young woman who ultimately becomes the title character defying the odds agaqinst her. Baskin, small and fragile, is the perfect choice.

It is up to the young lobby security guard who falls in love with her to make a difference in this play; as Jeff, Kenny Toll is charming and delivers a funny performance in a dramatic work. Written with a keen sense of humor, Jeff's nonsense and his purpose - to rest - keeps the very delicate balance of the play alive. Toll does a very nice job giving his character an innocence that isn't feighned nor overplayed. Jeff's errors in judgement are real ones and the complications they cause are honestly delivered. His eagerness to assume an adulthood for which he is not ready mirrors the actions of the god, Cupid, hoping to land his love-arrows in the correct breasts. Things just don't always go the way he plans. Toll is captivating as Jeff, a male ingenue, a classic juvenile.

Costumes in a play like this one can make all the difference. Toll's feels just a bit too grand for his character. Too many sudden color changes and a badge that appears too large on his chest aid in the lightly humorous image Jeff projects. Similarly, Dawn's police uniform appears slightly too large from hat to shoes leaving room for her young body to grow to fill it. In similar costumes Bill, her superior officer and William, Jeff's supervisor seem to fit perfectly into their clothing, uniforms that emphasize their inner "perefection" for their forms of employment. Miranda Giurleo is the designer responsible for the exterior visualizations of their inner personae.  In the same way the subtle lighting design by Devorah Kengmana keeps us grounded in the reality of the late shift of a security guard's employment. Not much changes here, and the world outside the lobby seems to never be affected by weather or traffic, although we hear both from time to time.

Jonathan Lewis Dent plays William, a man whose authoritarianism is a self-protection against the currently crazy personal disasters he must deal with which incidentally bring him into the controlling hands of the policeman, Bill, almost an alter-ego in play here. Dent, in control, plays a man with a mission he knows he cannot fulfill. William is caught in a trap that has not been laid for him, but he is caught in it nonetheless.  This role is the most difficult as it requires others to tell his story for his behavior to be understood, so the actor is at the mercy of the other actors for his reality to emerge clean and clear. That dependence, defied by William, gives Dent the fire to play the part of suffering humanity without options. Fortunately for the play Dent is a match for his cohorts on the Capital Rep stage.

Director Megan Sandberg-Zakian has kept a fine balance with the four corners of the round room that is Cristina Todesco's excellent set. Movement inside and outside the room, scenes played in the intimacy of a city street and in a cavernous, glamorous marble and cherry-wood lobby buoy the story of a girl whose losses convey humanity, and warmth unanticipated, as the play moves towards its inevitable communion. Sandberg-Sakian has handled the inner folk and the outer apeparance to perfection with an ideal company of players to follow her lead while Arshan Gailus's sound design keeps the play grounded within its city limitations. But the performances elevate the play to its hallowed heights.

To quote Noel Coward - "I couldn't have liked it more."

Lobby Hero plays at The Rep, 111 North Pearl Street, Albany, NY, through October 20. For information and tickets go to their website at capitalrep.org or call the box office at 518-346-6204.