Queen of the Night

"Queen of the Night" : a villainous character in Mozart's opera "The Magic Flute." Her two arias are spectacular, the second one having gained supreme stature among opera devotees and its best singers having become gay idols. This queen rules over the powers of darkness. Travis Tate's new play "Queen of the Night" is set in the darkness of night in a state park outside of Houston Texas where a father and son have come to spend three nights camping and bonding over the issues that divide them. Queen of the Night is also a large white cactus flower that only blooms after the sun has set. Anything but delicate its sturdiness is protecte4d from the harsh rays of the sun in its native  desert environment which project solitude. Queen  of the Night is also sometimes applied to a gay man who frequents dimly lit gay bars in order to pick-up tricks for anonymous sex without revealing their identities. Tate uses all of this subtly in his extraordinary new play having its world premiere at Dorset Theatre Festival's outdoor season at Southern Vermont Arts Center in Manchester, VT. 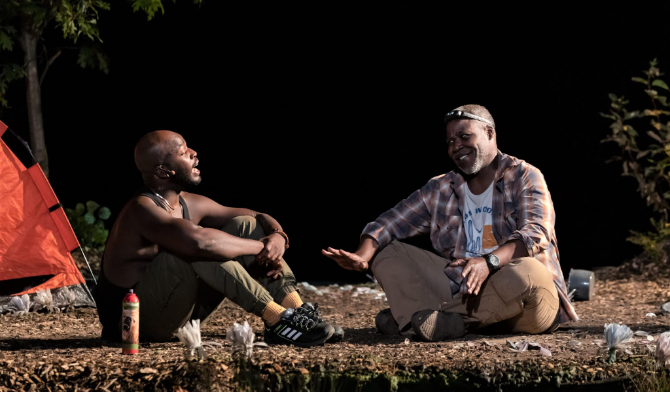 Stephen and Ty, father and son, have escaped early social responsibilities at Stephen's ex-wife's impending wedding in town by retreating to a favorite plateau in the state park, a place of previous outings that affords them a certain degree of safety from the world and avoidable cares. They erect separate tents, prepare for bears, fish and cook dinner over an open flame. They forage as needed. They talk. Their talk, some of it long overdue, takes them into foreign territory they've both avoided for a long time.

﻿Set, as it is, in an open field surrounded by woods on the SVAC property where natural sounds combine with taped cues, this play feels like its audience is in neighboring clearings where all can be overheard, where everything is real. The setting, designed by Justin and Christopher Swader, landscape gardeners, adds a remarkable reality to this play. 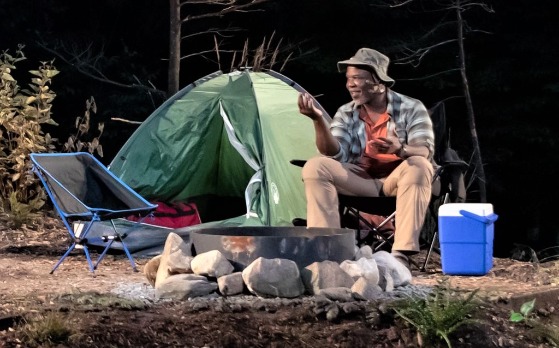 Danny Johnson is a lovely and loving Stephen, a man who needs to push his son to confession and coming to grips with his identity. At the same time he himself is struggling with the realities of his life and coming to an understanding of those things that have brought him to the place he is in. His world has exploded around him and his complacency has only helped to a degree. His friendship with his younger son has festered and he want to change all that, but his method is rudimentary and his manner is abrupt.

He is a good man, whom Johnson plays effectively. He falls back instead of forging ahead. Using metaphor as a resource, Stephen finds himself lost  at sea in this desert parkland. Watching Johnson extricate his character from the morass of careful language is a beautiful thing. This father wants truth and to get it he is forced to expose himself to his son, to also be truthful in all those areas that pain him. The gradual reveals are fascinating. Johnson makes it all seem as though reality is a trigger of  a gun that rarely fires. He handles the slow reveals like delicate china being passed from hand to hand in an overcrowded dining room. When shared experiences begin to break his son's careful reserve down Johnson's Stephen also begins to alter, his manner of suggested orders become more gentle and more humane. 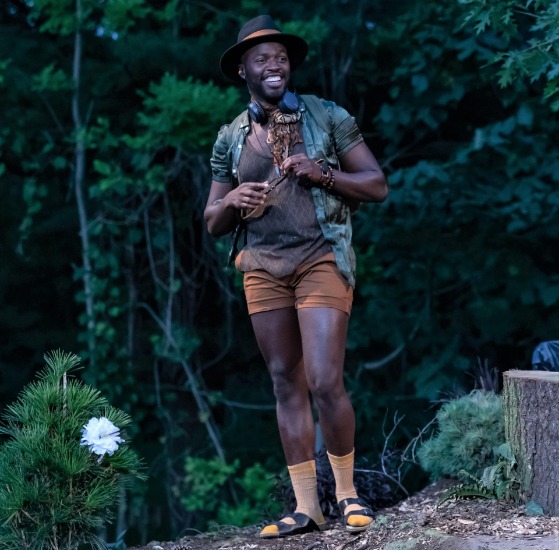 Leland Fowler's Ty is prickly. Her is indulging his father and at the same time reliving childhood thrills that have given him stability for most of his life. That he is both gay and challenged is never in question. His self-loathing comes and goes and his self-assurance is of utter importance. When Stephen turns the topic of his homosexuality up to  cooking fire intensity he is thrown onto the flame and it becomes his  dare - to fry or to fly.

Fowler is up to this challenge, marking his temper's time as the conversation becomes more anxiety-driven.  His playing of the difficult transitions in Ty's life, his love-life, his sex life, his family life is constantly on the edge. He struggles to maintain his cool which, when it blows, blows as hot as the Queen of the Night -- your pick of which one. 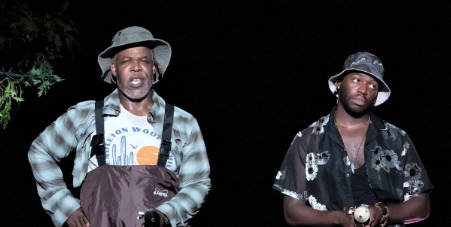 Too often in this play, the characters tend to switch sides. Ty questions Stephen's actions and reactions to things in his own life and Stephen openly accepts the realities of his son's choices. Each of the men have less distance to travel to openly embrace the other's problems and prejudices. To us, in the next campsite, these are emotional and  intellectual equals. That is the play's only flaw and it can basicallly be ignored.

The graceful symbolism of this play's production is given full attention by the designers and the director. Set in the dark and played in the dark, the lighting designer, Yuki Nakase Link has almost made darkness a third character in the play. a natural darkness descends as the two mem make camp, making a statement  about what's to come, Costume designer Fabian Fidel Aguilar dresses the men simply and appropriately, sometimes with humor; Ty often seems to be mostly naked as he opens himself to truth. The sound design by TBO provides so much context to the play that when thunder and lightning broke out I wasn't sure if it was designed or real. Raz Golden has directed a play that seems so real, so genuine from moment to moment, that we really do feel like incidental eaves-droppers. He has used Tate's writing style, his overt naturalism, to forge a stage product that never gets stagey. We live through an experience that, like the white flower on the wrong bush, is where it belongs.