The Irish. . .And How They Got That Way, by Frank McCourt. Original Musical Arrangements by Rusty Magee; New orchestrations and arrangements by Josh D. Smith and Harry Lumb.

"If you're Irish, come into the parlor"

﻿﻿You may not be Irish going into the theatre to see theRep's production of Frank McCourt's "The Irish. . .And How They Got That Way" but you will be Irish as you leave the building. The Capital Repertory's production of this highly musical, story-telling, history-theatre piece will lift your spirits even as it deals with poverty, mistreatment, misunderstanding, prejudice, family values, family deaths, immigration, famine, politics and religion. It also deals with entertainment, great stars of the American stage and screen, like George M. Cohan, Blanche Ring, and James Cagney. It will lift your hearts, open your minds, and take you back to a time before you were born, when the Irish were the underdogs in America who built the railroads, the canals, the communities, the slums, the art and culture and the music of America's 19th and 20th centuries. If, like many of the characters in this show, you believe in miracles, take the time to see one, in Albany, NY. 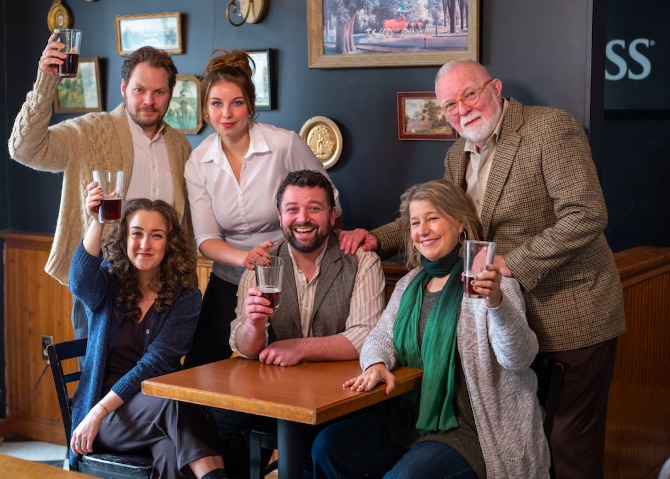 On a brilliant set, an Irish pub, designed by Brian Prather (a Berkshire Theatre Critics Award winner) the history of the Immigrant Irish in America is played out with beer, rum and whiskey by eight people who represent a whole host of Irish-Americans over the two centuries the show covers. The company sing, dance, act and play multiple musical instruments along with two musicians, Doug T. Esmond and Harry Lumb, who live upstage left and who play their instruments to perfection. The show never centers around just one of these talents, but moves among them like a weaver with a complex pattern to work through her loom, her shuttle adding texture, color and pictures to the warp of the wild woolen weft.

Wearing the excellent costumes designed by Miranda Kau Giurleo, and superbly illuminated by lighting designer Travis McHale with remarkable projections designed by Nathan W. Scheuer and perfect sound design-balance by Ryder Q. Stanton, the six actors/musicians escort their audience through more than two hundred years of history we might have heard about in the fourth grade - if we're lucky - but haven't remembered or given much thought to in all the years between. So how is it possible to do all this in just a bit over two hours? Author Frank McCourt's arrangement of history is staged flawlessly by Maggie Mancinelli-Cahill and danced through the vision of Freddy Ramirez. It all seems just right! 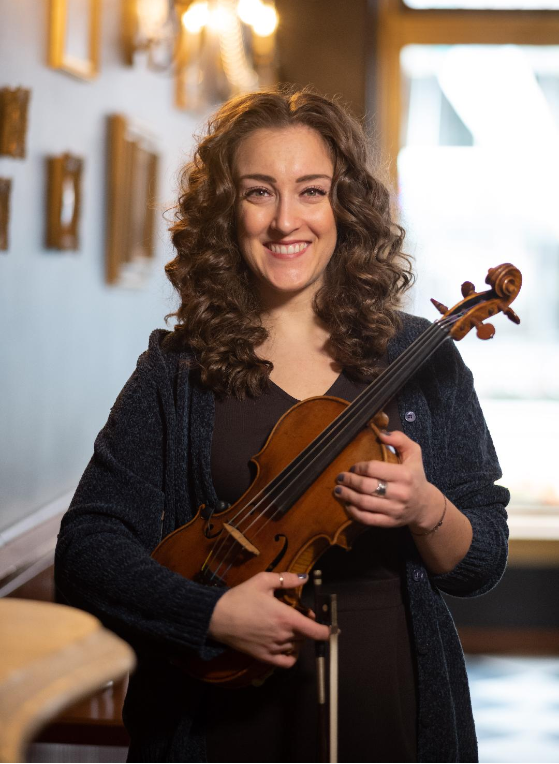 The sweet and lovely Caroline Whehelan enters with her fiddle (Irish for violin) and turns "Rose of Tralee" into a personal statement, an introduction as it were to a character whose identity will forever remain untraceable.  A frequent player on this stage, Whehelan presents so differently this time it is as though you were meeting her for the first time. Whether singing or playing, she is the sort of girl who entrances you with her special beauty and her talent. She also plays percussion and the glockenspiel, by the way. 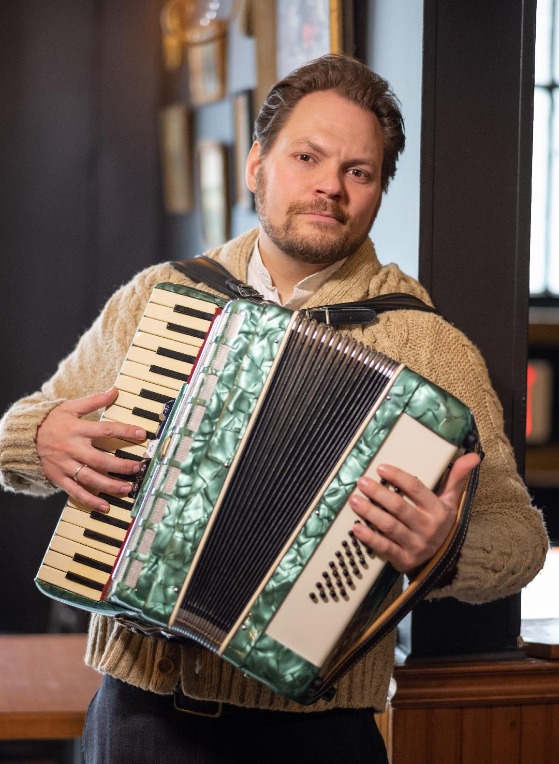 Josh D. Smith, Musical Director, arranger, and performer spends more time in character and on the stage than ever before. Sometimes ridiculed by the other men for his singing (which is quite nice actually), he is a strong presence in this production. Smith takes the ribbing well, and never grumps, never chides himself, but is a always just a regular Joe. Playing piano, accordian, flute whistle, melodica and autoharp, he is a constantly busy person, both with the band and the other players. His presence brings joy.

As the bartender/femme fatale, Lauren Wright brings a sense of the Broadway hit musical, "ONCE" into this show. Another irish musical set in a bar with the actors also playing instruments, that show is one of a personal story rather than a historic overview and so the comparison ends with the physical similarity in style. Here, however, she gets to play all sorts of women including the family sage who tells the stories and commands respect.

Wright gets to display her talents playing violin, guitar and percussion as well. She brings to life another historic Vaudeville and Ziegfeld star, Nora Bayes (who first sang George M. Cohan's "Over There") singing "Has Anybody Here Seen Kelly?" and playing one of the four Cohans. This is a talented and lovely lady with enough talent for two people. 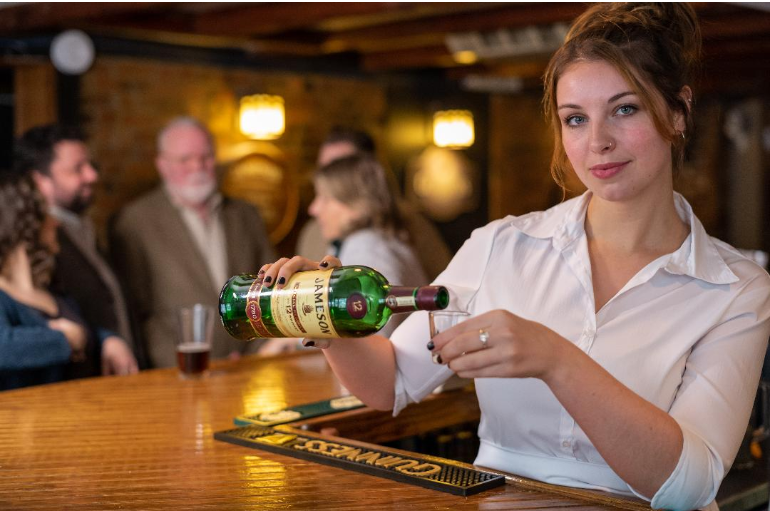 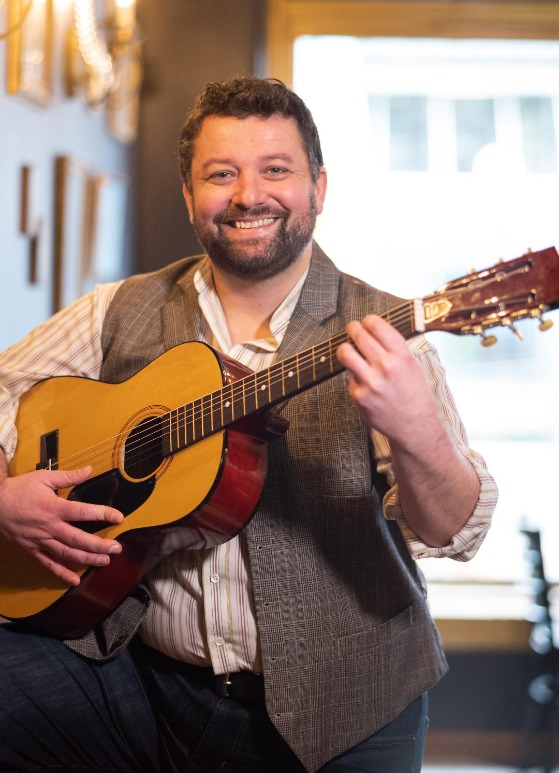 One of the hardest working people in this show is Patrick John Moran. A very busy Irish tenor, his voice lends an absolute ring of the genuine to the ensemble. He absolutely charms the audience even with a cigar in his hand and he never fails to bring a thrill to a song singing full throat, with a robust tone and a lyrical and melodic aim that is so strong it is almost visual. He also plays guitar and percussion. There is a constant sense that his characters are too sweet and personal to settle anywhere, or on any one thing and Moran milks this quality to perfection always leaving his audience wanting just a bit more from him, a thing he withholds to the dignity of each composer's intent.. 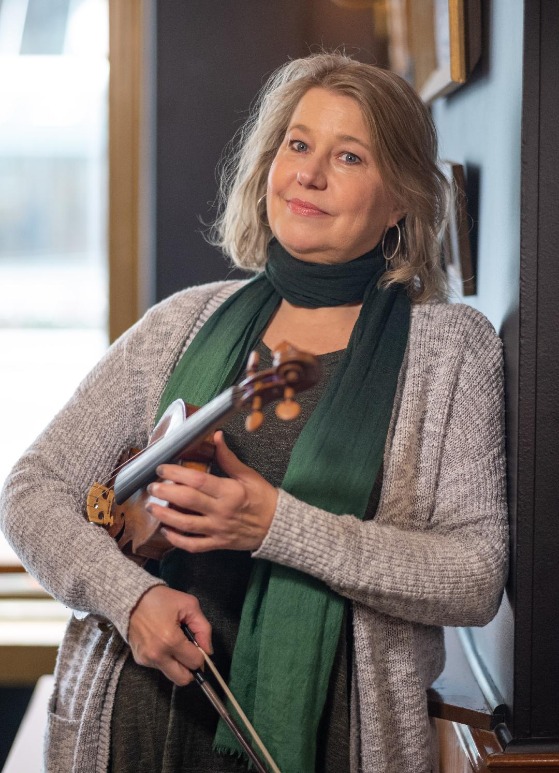 Emily Mikesell is another returning artist to the Rep stage. She is a wonderful character woman when she plays a recent widow or when she plays a Ziegfeld star. There is a very honest method of presentation when she takes on an actual character and her work on the violin, the bass, the accordion, penny whistle, mandolin and percussion (yes, she plays them also) is exemplary. Watching her face and body shifts into different characters is just wonderful, very theatrical and very honest as well.  Mikesell brings to this work a quality the other women cannot, and it is much appreciated. After all, not everyone can be and remain 23 and a touch of maturity is appreciated.

Capital Repertory Associate Artist Kevin McGuire plays the spoons . . . and percussion, of course. It would, most likely, have seemed inappropriate to not cast this wonderful, gentle actor in the final play of theRep's residence in this theater which closes, effectively, at the end of this show's run (theRep continues in a new theater in Albany in July, a permanent home being built for them). McGuire has been a featured player in many other venues for many seasons but always has a welcome here.

His principal character, an almost narrator, is solid, sullen at times, sophisticated at other moments and truly solid on the spoons. He sings with a magnificent bass-baritone and combines his voice beautifully with the other singers in the show. Equally at home in the step-out solo moments and the choral singing, he is a wonderful ensemble player, bringing truth and honesty to his characters, one and all.

When he begins to soliloquize, for a moment toward the end of the second act, about John Fitzgerald Kennedy, he leads the show into a sentimental and touching tribute that cannot help but resonate in the hearts of everyone in the theater. As stated way, way above, you many not be Irish when you enter the building but after this sequence, the songs that follow it and the admission that the quest for completeness while following the vagrant potato is never achieved, there isn't a dry eye in the house.

Arrive early and buy your own pint of brew at the onstage bar. Just do arrive and get into the joy of sadness, the bitterness of redemption and the sounds of a culture that will never die. . .not while this show is running, at any rate. 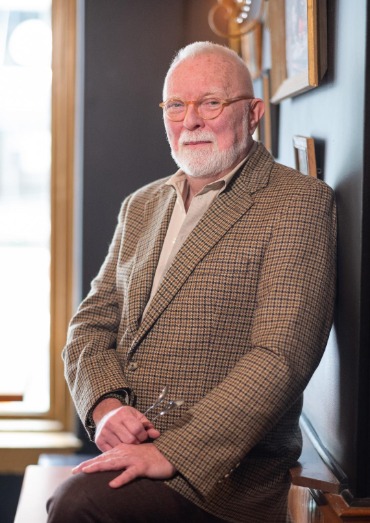