﻿"All this testosterone reminds me how cold it's becoming."

Six men, ultimately, agree to a group striptease in front of a 1000 women; the men are out of work steelworkers in Buffalo, NY during a depression that consists not just of a lack of money, but of self-respect, humility, opportunity and ingenuity. It is a depression all the way around. The result of their decision is, quite simply, enough hilarity to keep a large audience laughing until they cry. This is "The Full Monty" at CapRep, theRep, Capital Repertory in Albany, NY. The play is so funny that when Albany, NY gets mentioned as an alternative living and working space, the laughter only grows bigger.

This story about men involves some hot, hot women, led by Kimberly Doreen Burn (absolutely perfect) as Georgie Bukatinsky whose husband Dave, played by Patrick John Moran (heartwarming and so sweet with the most beautiful tenor voice), is one of the sad-sack guys who've been out of work for more than half a year. Georgie loves her outings with the male stripper group who come to entertain the ladies at $50 a ticket, plus their g-string tips. It is her enthusiasm for these Chippendale dancers that inspires Dave's best friend Jerry Lukowski to start his own local troupe of dancers consisting of himself and other out of work guys from the factory. It is a simple scheme: recruit six guys to dance and strip for a thousand women at fifty bucks a throw and go home financially renewed and able to support their families. This is their story until they are suddenly challenged to go all the way, to take the "full monty." Well. . .you knew there had to be at least one complication. It's a musical!

Jerry is divorced with only partial custody of his son, Nathan, and his ex-wife is involved with a man who wants shared custody of the boy Jerry cannot support. A sadder idea could not occur to Jerry, who devises the get-rich-quick idea of dancing for a living, and then compounds it with the full frontal nudity commitment, one he isn't sure he can complete. In his sentimental lullaby, "Breeze Off the River," Sutton sings of Jerry's conflict and his love and the man who has been something of a caricature becomes a real live person and he captures the hearts of the audience.  It is a lovely performance of the song and it resonates throughout the balance of the show.

Sutton and Keith Dubois as his son interact well together. They are part of an ensemble of actors who complement one another in so many ways I don't really know where to begin. If there were no songs and dances in the show it might seem as though we were watching a real group of guys in this dilemma working out their problems. At times this edition of the show just felt that real. 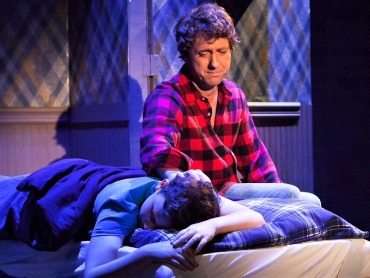 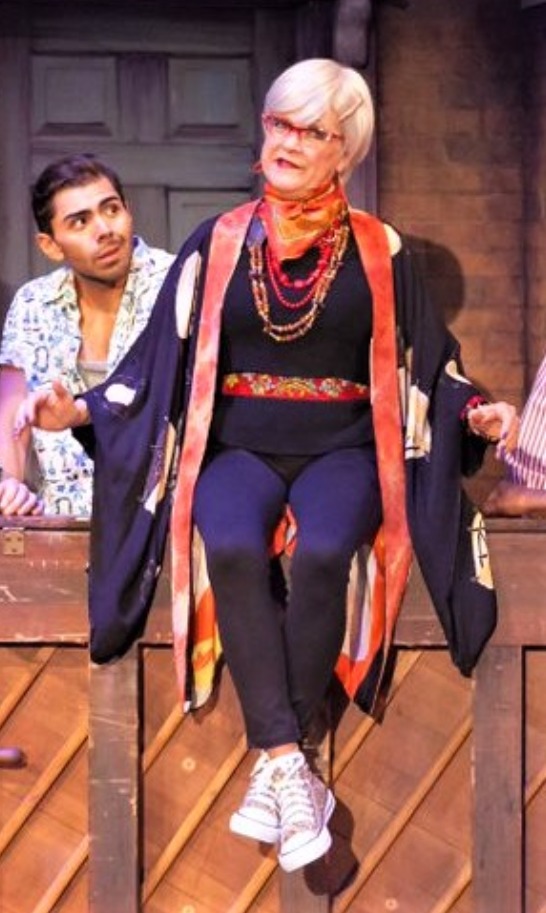 Every member of the steelworkers dance troupe has his own specialty: Dave can bump and grind, Harold can actually dance, Malcolm can swing, Horse can move erotically and Ethan can run up to a wall and nearly knock himself out. There's not much talent among the group, but each ultimately brings enormous enthusiasm to what they have to offer. Luckily they have an enthusiastic piano player named Jeanette to keep pushing them forward. She is played by the lovely and humorous Susann Fletcher who keeps the one-liners zinging. In her solo song, "Jeanette's Showbiz Number" she combines optimism with honesty keeping the men off-guard. It's a terrific number performed with pizzazz and gusto (not the same things). Fletcher is terrific throughout the show as her hair keeps altering with each successive scene.

With all these men and all this semi-nudity you might expect two of them to begin a relationship. You won't be disappointed as love rears it bisexual head throughout the play.

Another stand-out performance comes from Reggie Whitehead as "Horse," the only Black member of the dance troupe. In his most touching moment of the play he nearly has his second heart attack, on the night of their performance, when he spots two people in the audience he wouldn't want to see him dance naked.  While it may be difficult for Horse it is a comic high-point for us. Whitehead is both funny and poignant throughout the play, a gentleman in a rogue's role.

So many people in the cast are wonderful whether they have major roles or bit parts. We end up really knowing the people who populate the Buffalo neighborhoods and this is due to the actors who bring the locale to vivid life through its inhabitants. Extra special in their roles were Emily Matthews as Pam, Jerry's ex-wife, Gil Brady as her new boyfriend, Teddy, Kevin McGuire as Harold and Lyn Philistine as his wife Vicki, and especially David J. Socolar as Malcolm. All of them very special actors in terrific roles.

Production values for this production are first-rate. The band, led by Josh D. Smith played Yazbeck's somewhat repetitious music beautifully behind the wonderful set designed by Scott Aronow. The costumes that defined these characters were executed by Howard Tsvi Kaplan and the production was beautifully lit by Barry Steele. Sound design and balance was sweetly overseen by Rider Q. Stanton.

Freddy Ramirez's choreography was a geographic wonder and a delight to watch. But the kudos for making this all happen with such honesty and openness go to the director, Maggie Mancinelli-Cahill who has made this one of her finest pieces of work on this stage. The play seems to move on its own and there is not one false move on the stage. Each actor brings his or her own reality into the picture and the relationships feel so so real that the director's work must be marked a triumph of life-pictures. It really couldn't have been done in a better way no matter who was directing it: not Minnelli, not Gene Kelly, not any of the many fine stage directors who've brought "realistic" musicals to life before now. If asked what makes a musical a hit I would, tonight, have to say "Maggie Mancinelli-Cahill."

The Full Monty plays at theRep, 111 North Pearl Street, Albany, NY through August 11.  For information and tickets go to their website at www.capitalrep.org or call the box office at 518-445-7469.