Don Pasquale, Libretto by Giovanni Ruffini, based on a libretto by Angelo Anelli. Music by Gaetano Donizetti. Conducted by Brian Garman. Directed by Jonathan Loy. Reviewed by J. Peter Bergman.

"Newly coming from a convent, her confusion is natural."

The only thing missing from this sprightly, beautifully sung and played light opera was a definitive whip-crack, the sort you hear in the song "Mule Train." Let me explain. Norina, an actress, is asked to play a young, innocent, convent-reared woman, unworldly, untried, in order to take the wealthy but stingy, elderly Don Pasquale down a few pegs so that he will allow his impoverished nephew Ernesto to marry the woman he loves instead of compelling him to marry an elderly rich widow. In fact, Ernesto loves Norina, a recent widow and anything but a novice in the bedroom. This joke, played by Pasquale's friend and doctor, Malatesta, is the center of the story Donizetti plays out in his final comic opera. In the recent production presented by the Berkshire Opera Festival (for three performances - I saw the closing night edition), director Jonathan Loy has taken the comedy a full-step forward into 21st century hilarity. Modern art furniture with a pedestal chair and a dominatrix outfit are only two of the outrageous modernizations of the story onstage at the Mahaiwe Theatre in Great Barrington that enhanced this delicious confection. And it was delicious. Notwithstanding the whip-crack. 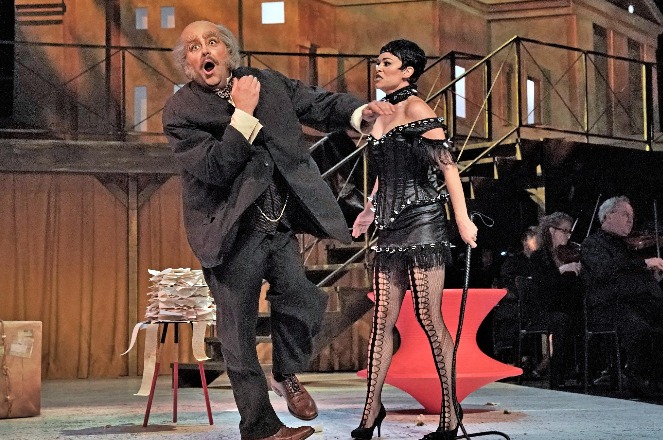 Norina was played by Deanna Breiwick whose stunning face and remarkable body were only two sides of her incredible talent; her voice was the surprise. She has a glorious, large, sustainable and well-controlled soprano voice that thrilled the audience even more than her second act appearance did as she donned her leather outfit and made a sturdy old man into her sensual slave. Turnabout is obviously fair play for Norina. She has played the prim, school-girl in her first meeting with Pasquale, and their hurried marriage should be to his lusty advantage, but just a day later she has turned into this Virago, this tempting torturer he could never have foreseen - it gives convent life a whole new image, by the way.

When Malatesta, played and sung by Emmett O'Hanlon, decides to aid his younger friend Ernesto, he betrays his older friend and patient Pasquale without a single trace of conscience, modern-day sit-com began to take shape. O'Hanlon's thrilling baritone voice and his excellent acting ability make him the perfect Malatesta. (In 1979 at the Metropolitan Opera  Håkan Hagegard made his debut in this role while Beverly Sills sang her farewell as Norina. It is the sort of role that can help make a career as it did earlier for Alan Titus who sang it on a recording with Sills, again.)

Craig Colclough is a very funny actor with a lovely bass-baritone voice. He played Pasquale not as a fool, not as a lecher or a booby, but as an older man willing to put himself in harm's way for a final time in order to satisfy the yearning of a man whose libido is on a resurgence. It is a very late eighteenth century sort of comic characterization that plays well in the early twentieth century setting this production provides. He sings like an Ezio Pinza with verve and gusto and excellent placement and tone. His voice gives life to a standard buffo character and takes him to a truer place in the comedy. Norina, playing Sofronia, Malatesta's virginal sister, strikes him several times and what  Colclough does with that gesture is a lesson in comic acting, from his physical reaction to the delectable expressions he concocts. 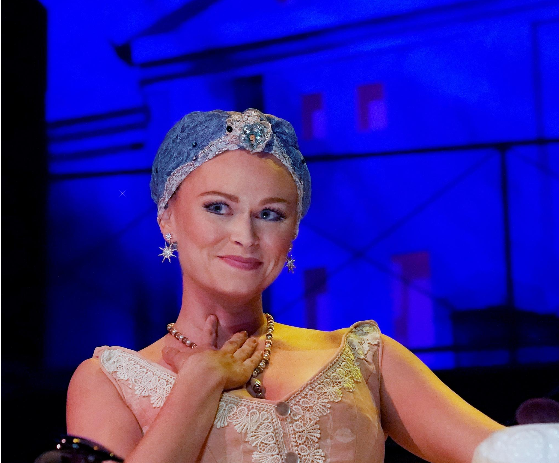 Director Jonathan Loy used his actors wisely and to great advantage as he updated the show into more modern times. He had the advantage of costume designer Charles Caine's eye for clothing. For example, in her first scene as Norina, Breiwick gets the chance to wear a variety of outfits that show her sophistication and her talent for costumes.  Her beautiful turban is replaced by her wig-ready head and then different wigs which give her different personalities. This is just an example.

Loy also used the concept of this show "being" a performance later in the play when Pasquale and Malatesta go off singing a duet about their upcoming attempt to catch "Sofronia" being unfaithful to her fake husband, Pasquale. They reacted to the audience's joy in their number, then performed a delightful encore fully acknowledging the fact that this was a show, and they knew it. This is a very difficult method to pull off well, and the two men, under Loy's excellent direction, pulled it off perfectly. For a good ten minutes the opera was a burlesque, a vaudeville turn and it worked! 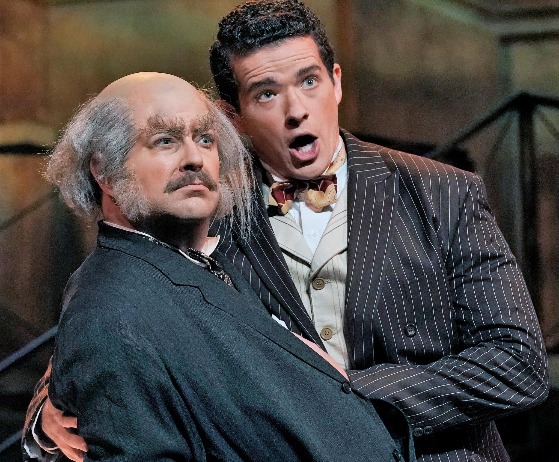 There was almost a male/male love affair on stage as Doctor Malatesta confronted Don Pasquale with a vision of his future with Malatesta's sister.  Loy brought his men so close that it was literally hard to tell one from the other, physically and vocally.

Stephen Dobay's set was created to accommodate not just the players but also the orchestra, 32 instrumentalists occupied stage left along with Brian Garman, the conductor. They were basically visible throughout the show but were never distracting from the action (see photo number one above).The imposing building above the stair-topped crosswalk initially appeared to be a distraction with its interior lights, but actually leant to the show a credibility about location that was wonderful. Alex Jainchill's lighting design seemed perfect, although the final bows were screwed up in darkness, but that may have been an error on the part of the stage manager, Cindy Knight,. who otherwise  ran a perfect performance.

In fact, the show could not have been more seamless and perfectly executed by everyone involved.

The fourth corner in this love triangle opera is Ernesto, the unlucky in love hero. He wants to marry Norina and he wants to inherit Pasquale's fortune, but it seems unlikely he will have either. Consequently he gets a lot of very good music to sing. For this production Ernesto was played by tenor Matthew Grills who won much deserved kudos for his work, particularly his final act love ballad,  Com’è gentil,

which is the main theme in Donizetti's score. Grills has another beautiful voice and a terrific comic timing.

The chorus, prepared by Geoffrey Larson, sang and moved very well and Siddharth Dubey as the notary performed his scene to perfection. 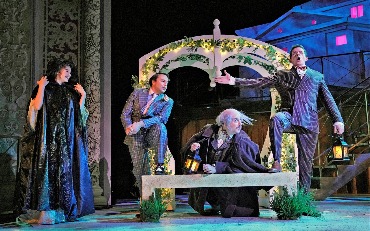 This show has closed its limited run. You can reach Berkshire Opera Festival at their website, www.berkshireoperafestival.org.