The Turn of the Screw

based on the novella by Henry James

﻿"Would you like to play a game of riddles?"

The classic story by Henry James, "The Turn f the Screw" has been the basis for many plays, at least two films and an opera by Benjamin Britten. Seeing a new version is nothing new; the story never changes, the outcome is predictable. This edition by Jeffrey Hatcher gives a slant that may be intriguing to you as it was for me. One woman plays the governess of two children who may be harboring sensual secrets and one man plays everybody else in the story. Using James' own language the two share narrative chores to render portions of the governess's diary and the Man moves with amazing fluidity from playing a male ghost to a small, mute girl, to an elderly housekeeper to a female ghost, to the children's uncle, to a ten year old boy whose demeanor may well be as much a lie as anything else in the story. Only one thing remains exactly the same throughout the entertainment: the governess's rampant belief in what she knows to be true, even if she is reluctant to speak the truth in its entirety. 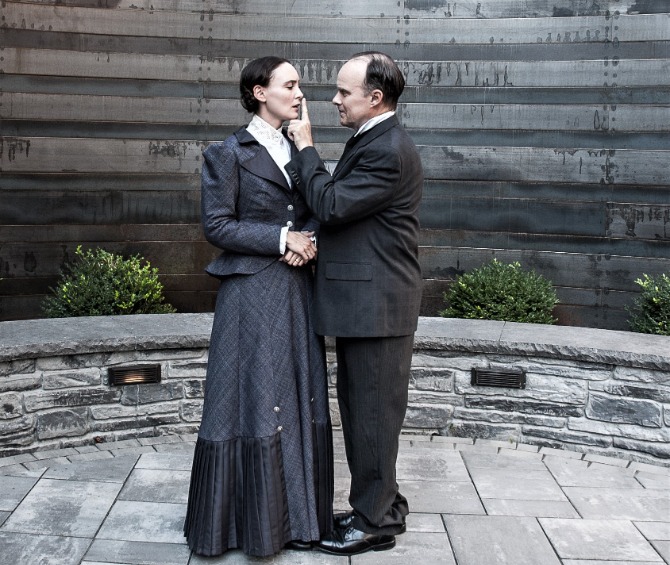 On a brilliantly fluid set designed by Ken Mooney (NOT the set shown in these photos) and in his costumes also, the two actors in this production - Rebecca Mozo and Oliver Wadsworth - play out James's tale in remarkably simple terms. Moko uses her natural beauty and her expressive face to bring the Governess to complete life as she struggles through the character's reticence to express herself as she wishes to while at the same time overstating her beliefs and reactions to what the character sees and feels and cannot shake off. The actress finds her way, with the guidance of director Jillian Armenante, into the depths of emotional intent. The governess wants to be in control of the situations that assail her young charges and although she believes she has things in hand, she never really does. This is just not what she needs and Mozo plays the frustrations of the situation to perfection. She makes the calm moments tense for us in the audience and the tense moments come with a subtle calm that is confounding to witness. We  wait for her to break under the pressure but Moko holds back just enough to make us wonder about the woman's sanity without ever playing the madness that overtakes her character.

The deviousness of the children's uncle, the owner of the country estate complete with lake which is home to them, is the first character we meet in the canon of characters played by Oliver Wadsworth. He is a rational man with a strange lack of compassion and her attraction to him can only be explained by the simple newness of being in adult society, something new for her. Wadsworth lends a sense of impurity to him without overplaying this quality; it is something he saves for the ghost of Peter Quint. His Quint shares the physical attractiveness of the Uncle, allowing us an early understanding of his own attractiveness to the children who seem to find in him all that they miss in their guardian. Wadsworth's conflicting portrait of the good, but incapable relative lends strength to the evil Peter Quint who seduces the first governess, Miss Jessell as it does to Wadsworth's ten-year-old Miles. The child's sophistication is a wonderful portrayal of a child who will not be a child. He is less seductive than other actors have made him, and yet there is an easy, pleasant maturity to this actor's portrayal. Mrs. Grose, the housekeeper, is a remarkable character in Wadsworth's hands, common yet classy, concerned but unclear about her concerns. She is the character we see most often and she is a gem. Wadsworth slips in and out of these people with ease and with claritiy. It is a tour-de-force performance, enthralling and memorable - not to be missed.

Armenante has done a great job bringing this show to the stage. Her careful direction keeps us always on track, always with the right people at the right moment in the non-stop one-act format. This isn't the most frightening variant but it is the most interesting one I've seen in a long time. In part that is due to the outstanding work done by sound designer Cory Wheat who has created a tapestry of sound that underscores the drama, mood for mood. There are questions, as always, left unanswered but it isn't the director's job, or the playwright's, to solve the riddles posed by Henry James. That chore belongs to us who, presented with the facts as diaried by the Governess, must make up our own minds as the puzzle plays out before us. 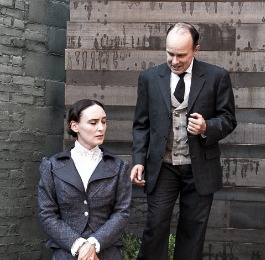 Thie Turn of the Screw plays at the Bennington Performing Arts Center, 331 Main Street, Bennington,, VT through September 12. For information and tickets call the box office at 802-447-0564 .