""You can eat a boiled egg, but you can't avoid botulism."

Conor McPherson can be a very realistic writer or a tale-teller of far-out fantasy.  He is the author of "St. Nicholas," the story of a theatre critic who becomes the willing servant of a vampire, "The Weir," about denizens of a rural tavern, and "Shining City," a Tony Award winner about an unusual encounter between a man and his late wife. This time around he has written a play about the demons, those mind-bending horrors that haunt people at their worst, and about how reality can transform them into the monsters that control us. McPherson is a spinner of folk tales and this play is no exception.

﻿Tommy, a middle-aged man on the almost impoverished side of life resides in the former drawing room of his elderly uncle's Dublin house. He often has his good friend and occasional conspirator, Doc, over for the night. Doc is a bit tetched in the head but has a good sense of reality about him. When, one night, Tommy rescues a girl named Aimee from an abusive man and brings her home everything in the two men's lives comes to an abrupt and irreversible halt. Without meaning to effect change, change comes and it both amuses and haunts Tommy whose own marriage has broken off and he has been separated from his own teenage children.

Aimee is a "limited" girl of the streets who suffers the life without complaint and when she is pursued by her former boyfriend "handler" the lives of Tommy and Doc take an abrupt downswing, one almost murdered and the other misused and the object of scorn and abuse. In Ireland this is known as a comedy. At the Chester Theatre we could call it a slice of life situation-comedy with an emphasis on situation.

James Barry plays Doc and Joel Ripka plays Kenneth, both men in unfamiliar roles for these two actors. Barry plays a man who might be classified as "slow" and Ripka's character is the quintessential embodiment of "pure evil." Being the expert actors they are they manage to convince us, with certainty, that Kenneth and Doc are exactly what they seem to be.

Kenneth is a games-player moving his opponents around a chess board of his own designing. He manipulates Doc, and later Tommy, into playing his game his way, but he meets an unexpected comeuppance from his own worst victim. Ripka is brilliant in this part. He never telegraphs his character's intentions and yet we feel what he's about, we fear him from his first entrance to his final exit. Subtle evil is much harder to stomach than telegraphed bad-guy-ism. Ripka handles this role with professional aplomb and though the jokes stop for a while, they still seem to hang in the background of all of his scenes.

Barry's portrayal of a damaged man, a man whose mind has assumed it own limitations, is sweet and defiant at the same time. Doc accepts no problems but the ones he creates while demanding fair treatment. His observed dopiness is almost a garment put on over his own clothes to hide the deeper reality from everyone including himself. The strength the actor bring to this role is the self-knowledge that a man can still be a man, and a fine man, even when his brain won't let him be more than a boy who cannot grow up enough to be the man he feels he could be. There are no words in the play to describe Doc, but the man is fiercely alive on the Chester Stage in James Barry's hands. 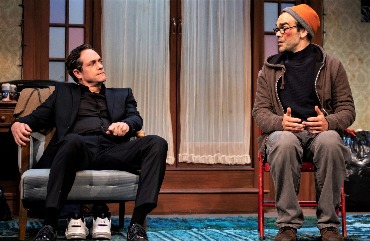 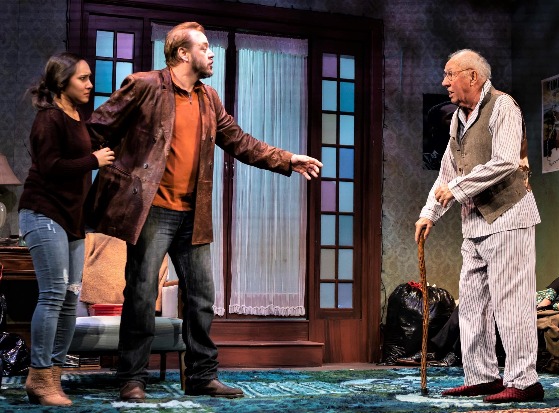 Tommy is played by Justin Campbell with a simplicity that allows his habits and his humor to run rings round the stage set without upsetting the mess in which Tommy lives. He is a man who even when embarrassed by his own sloppiness can work through it to maintain a good opinion. Tommy is a big man whose soft heart is his finest quality and he doesn't even realize it. He is, in truth, his own uncle's distorted image.

Uncle Maurice, played by Nick Ullett, is a better friend to his nephew than either of them realize for the longest time. He has provided a home and a refuge that allow Tommy to exist in the strange world he has chosen to inhabit. It is his uncle who is the hero of the play, though Tommy has all of the heroics to assume from beginning to end. Ullett is a wonderfully gruff Maurice, a man who cannot be satisfied and won't take any excuses for the things he detests taking place in his own home. Ullett's straightforward playing is just right for Maurice and he is a winner in the part.

It is the way these two play together that delivers the unusual sense of a family dynamic that otherwise doesn't really exist in the play. Maurice and his wife have raised this formerly feral child, almost as their own, but never completed him, a job that Maurice has left to the last. 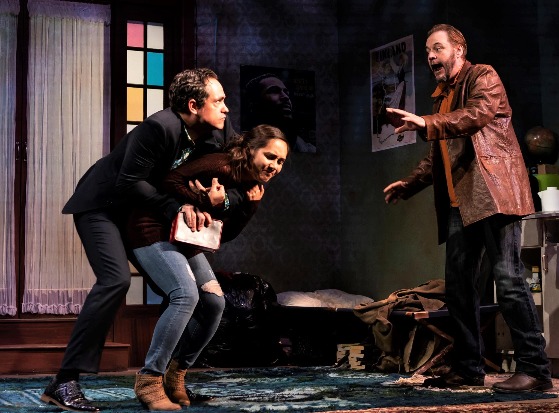 Marielle Young has taken the part of Aimee, an enigmatic young woman whose presence in Tommy's "flat" removes the flatness from the place and brings mystery, danger, passion and humor into the story. Aimee has fled the man who tortures her but loves her and whom she loves in spite of herself. McPherson never lets us know too much about her lest the mystery of the play be too self-revealing; this is an interesting choice by the author and one that bears strange fruit as the tale is played out in front of us. She gives us almost chilling reticence and she provides sweet humor as well. At the end of the play there is a visual confuser when Aimee appears where she shouldn't be dressed in a manner that suggests many things, some of them more ethereal than corporeal.  As Tommy steps up to a new reality he is confronted by the vision he sees before him and the play's final blackout leaves us blacked out of what McPherson is going for here. I must say I loved it.

Daniel Elihu Kramer has gifted his audiences with a comic thriller mystery play, mystery in a religious sense rather than Agatha Christie. Some of that is due to his excellent design team, most specifically lighting designer Lara Dubin who has done a wonderful job with this show.Costumes certainly make the man for Doc in clothing created by Charles Schoonmaker and the set designed by Ed Check is picture-perfect. Tom Shread's sound design work is just what the play needs.

The Night Alive plays at the Chester Theatre, 15 Middlefield Road, Chester, MA through June 30. For information and tickets go to their website, www.chestertheatre.org or call the box office at 413-354-7770.