You Have the Right to Remain Dead, by Pat Cook.

This is how the instrument of death is described in the very amusing comedy, "You Have the Right to Remain Dead" by Pat Cook, a one-weekend wonder at the Bennington Center for the Performing Arts, the home of Oldcastle Theatre Company. A troupe of basically non-professional actors play a group of actors doing a play loosely based on Tennessee Williams' "Cat On a Hot Tin Roof." Suddenly, after an unexpected blackout during which gun shots ring out, a dead body is discovered in a prop and it just isn't who it appears to be. A police detective, in the theater for personal reasons, just must take the case and soon everyone in the audience is a suspect. This is the premise of the somewhat improvised play you're watching. You are in it. This piece, under the direction of Ellery Schiller, plays out its investigation - with two confessions - until the final solution is revealed. Bennington has embarked on a "year of mystery" and this show is the community theater's contribution. Frankly, it is a fine piece of the year-long puzzle, one that entertains and amuses. 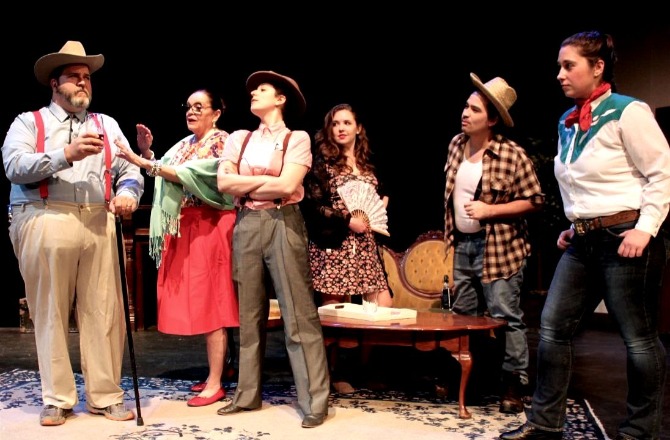 The company of ten players makes every effort to play it real, but now and then the situation just won't allow them to do that and a curious sense of exaggeration pervades the space. Oddly, this is just fine as the very odd plot unfolds. David Motta as Fat Daddy (in the play; Arnold is the character's real name) turns out to have been locked in the backstage bathroom during the shooting and he enters with toilet paper stuck to his shoe as proof of his wherabouts. Arnold's ex-wife Doris, playing Sweet Mama, as played by Mary Jo Greco, is not supportive of his reasonable explanation. Others in the company all have their own reasonable explanations and as things progress the stage manager, Trudy, played here by Amanda Reagan, becomes the prime suspect even when the police detective Bainbridge (an aggressively professional Drew Davidson) also becomes a suspect. It seems everyone on stage had a perfect reason to kill the man in the wheelchair. The plot thickens; the villain's afoot. There's another blackout. The audience is held under house-arrest and it's intermission. The second act is even sillier, but it works nonetheless.

To aid to the confusion there is a ten-minute intermission mentioned in the program, though the play announces a fifteen-minute intermission and when you inquire at the lobby bar they assure you it is a ten, and then it turns into a fifteen. The entire building is complicit in this piece of nonsense that amuses and satisfies its audience. Greco is wonderful in her role(s) as is Donna Motta as Blanche, the director of the Williams parody. Danny Townsend plays the perfect amateur with a police record as Ajax (with an alias) and Robert Ebert is just right as Harnell, the friend the policeman has come to the theater to visit. Amanda Reagan, as the teenage stage manager, slouches to the maximum, laughs maniacally and brings a sweet if vague reality to her role. In fact, outside of the murder, the company is lifelike and real as community partners in the production of this silly play that surrounds a parody play that we never really see because of the murder. Author Pat Cook has thrown in just about every possibility except the set collapsing (that's a whole different play coming to Proctors in Schenectady in April).

It would be wrong for me to talk any longer about the play itself. After all it is a mystery and we don't give away the details or expose the ending. Suffice it to say that if you can catch its final performance you won't be disappointed. Schiller has done a nice job of putting the show on its feet and keeping it there. . .on its feet. She has had the help of costume consultant Jennifer Marcoux, lighting designer David V. Groupé,  and sound designer Cory Wheat. I do believe that the year of mystery is off to a good start with this silly show. It is an example of good work by a clever company using a unique script to extract unusual performances from unlikely people who not only look the parts they play, but exhibit traits of the characters their actual characters play. Confused? See the play. That's my best suggestion. And what about that date?  Hmmm. 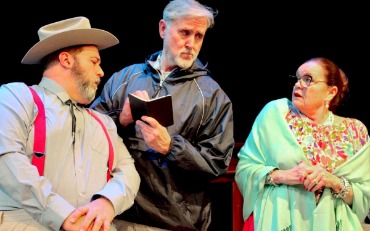 You Have the Right to Remain Dead, plays at the Bennington Center for the Performing Arts, 331 Main Street, Bennington, VT. For tickets call the box office at 802-447-0564.