Lucky Stiff, Book and Lyrics by Lynn Ahrens, Music by Stephen Flaherty. Suggested by the play "The Man Who Broke the Bank at Monte Carlo" by Michael Butterworth. Choreographed by Rebecca Fraizer. Directed by Robert W. Schneider. Reviewed by J. Peter Bergman.

"Something funny's going on here."

Something funny, indeed, is happening on stage at the Theater Barn in New Lebanon, New York. It's a musical called "Lucky Stiff" and the stiff is getting stiffer as the play goes on. He is seated in a wheel chair and will probably have to be buried sitting up. You may not think that is funny, but believe me, it is. Considered a musical farce because of its hilarious entrances and exits, some with gun, some with wheelchairs, it is an outrageously funny show and the production in New Lebanon proves it worthy of the show title and the category. There's a hero, of sorts, named Harry Witherspoon and a villain of sorts named Rita LaPorta. There's an unconventional heroine named Annabell Glick and a whole collection of odd men and women who try to horn in on a missing $6,000,000. Every minute of the show has something funny going on and this production has a cast that is as funny as the writing, an excellent combination.

By the beginning of act two Harry Witherspoon is haunted by the life he has led and the life he is leading. Almost two days have passed since he learned that he had inherited  a fortune from an uncle he had never met. He has left his job as a shoe salesman to take the "stiff" on a trip to Monte Carlo and he has become involved with a young woman who is his rival for the money. He is being pursued by a mercenary woman who killed his uncle and he can't understand what is happening. He's a sweet if dense British gent with no one to turn to for the advice he desperately needs. Played by Matthew Ruehlman, he is a very needy, very sweet and very funny man.

This show has a peculiar history, almost as odd as the plot in fact. It is the first Ahrens and Flaherty show, for one thing. It played 15 performances in its first off-Broadway run, but has had major productions in England and in theaters around this country. It has won awards, been recorded and it's been made into a film, but it has never been on Broadway. This is the second production at the Theater Barn.  With its current cast and staff it is delightful, the perfect show for an August evening.

In addition to the excellent Ruehlman there is Nicole Weitzman as the furtive murderess, Rita, an Atlantic City mafia wife, who was the dead man's mistress until she shot him. Weitzman is extremely funny as the vain Rita running around without her glasses, accompanied by her optometrist brother Vinnie DiRuzzio played by Jordan Ari Gross. He takes up with a hotel maid while his sister is disguised as a hotel maid. While the expected results do not occur, you wait for them all the same.

Also a hoot is the body of Tony Hendon played by Joseph Sicette. Being dead in a wheelchair provides a multitude of opportunity for Sicette to act dead in different positions and different ways. He is successful with all of them. Tour guide Luigi - or is he? - is played with joie and vivre by Mark Shane-Lydon and his character is the perfect mystery man as he holds surprises and revelations no one even suspects. 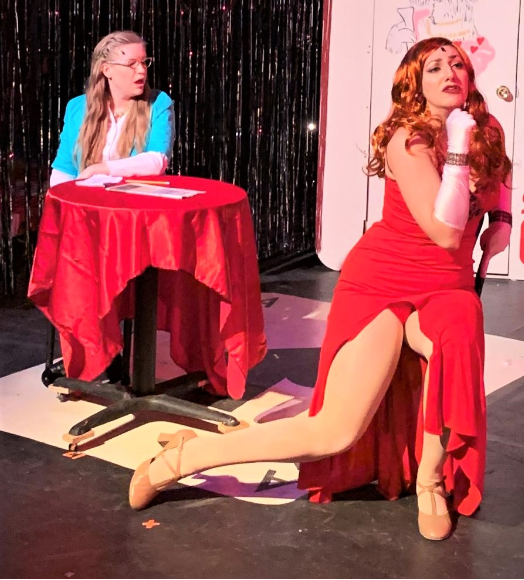 There are loads of repressed sensations in the character of Annabell Glick, the appointed representative of Harry's opponents for the legacy, the United Dogs of Brooklyn, a shelter she represents. Apryl Higgins has a ball playing repression and when she comes undone she has even more fun playing the carnal opposite. She and Weitzman each have songs with which to show off their musical talents and both women are strong and well-defined by their vocal chops. Higgins is at her finest dueting with Reuhlman in the second act song "Nice."

Another nice vocal turn is performed by Samantha Streich as a French cafe singer, Dominique, a peripheral character who becomes another major player in this funny play. "Speaking French" is the song she performs that wins audience favor. In this large cast for the Theater Barn she is a welcome addition to the on-stage talent bringing a fresh look at a show with a single joke, really, albeit a good one.

Andrea Schmidt is fine as the landlady at Harry's bed-sitter. Brandon Lee does well as the solicitor discussing handling Tony's will and all his other roles as well.  Levi Squier turns out to be an excellent, almost frightening  Vicious Punk and other roles. Jill Engstrom has a very good time as the drunk hotel maid. And as the gratuitous bell hop Nicholas Grevera has a few stolen moments with impact.

As danced, or at least artfully moved to music, the cast handles Rebecca Fraizer's work well.  She helps keep the show fluid and entrancing. Sam Slack's set with moveable platforms is pretty to watch and highly functional as well.

Kevin Wallace's﻿  musical direction with his small ensemble of three players sounds much bigger than that, which truly helps keep the cast on their toes. Some of David Louder's costumes are funny to see, and some just fit their character's character. Jake Jamros did a very good job of lighting this show, but it might take more instruments to adjust the look from frantic Atlantic City to drab London to the hot seacoast of the Mediterranean.

Robert W. Schmidt has directed this company with an eye to identification much more deeply than a "whodunnit" demands. We need to know who these people are and also who they might be in their real lives. He pulls it off nicely and everyone emerges as a character rather than a clone and that's good because a good mystery needs a good, tight, lock-em-up amount of restraints all of the time. ﻿

A good French farce has a minimum of five doors and this musical only has two, but there are other ways people appear and disappear here so with a tiny stretch of the imagination this farcical musical can become the French version easily. And more than two thirds of the show is set in Monte Carlo where French is the most acceptable language, so there you are.

I enjoyed this presentation very much. I did, but you may not. Still, if you don't try it you'll never like it. And this show is one to try out as soon as possible. We're now in the Trump-years: I don't find that funny and I don't find it sad. I just don't find it. In "Lucky Stiff" I feel we're one step closer to what I am  talking about. I feel one step nearer to how plots evolve even without me. Good comedy does that for me and this one qualifies as even better than good.﻿

Lucky Stiff plays at the Theater Barn, 654 Route 20, New Lebanon, NY through September 1. For information and tickets go to their website at www.theaterbarn.com or call the box office at 518-794-8989.