A college student, Zoe, meets with her professor, Janine, about an important paper she has written on political issues that Zoe has reconceived as something rarely addressed. This meeting turns into a rally call for racial and otherwise American issues which become explosive and lead to dire consequences for Janine, for education and for critically political and personal freedoms. Eleanor Burgess’s play, “The Niceties” could easily have been titled “The Nasties” as these two women battle from diverse points of view over the use of words, of ideas and of convictions in Chester Theatre’s dynamic presentation under the tent at Hancock Shaker Village in Pittsfield, MA. 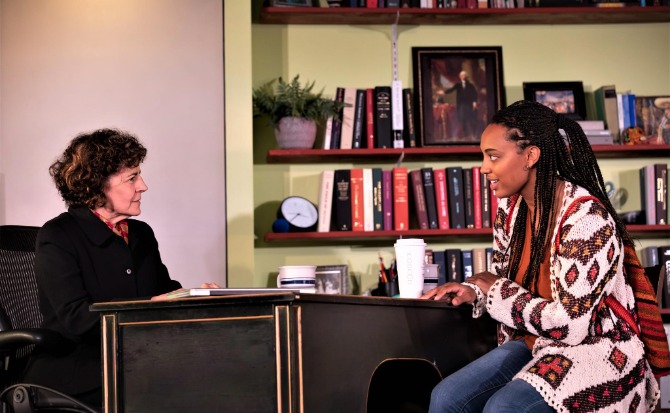 The conference proceeds normally, Zoe accepting her teacher’s helpful, critical comments amiably until Janine’s thoughts on topic come into play at which time Zoe becomes irritable and the talk turns political, each character seeming to line up with ideologies that will never converge. The play actually begins.
It’s second scene brings the two women back together to explore the aftermath of Zoe’s act of betrayal and subversion. Comfort has been replaced by realizations and motives on both sides are ultimately what the play deals with as it tests both Zoe and Janine, their senses of honor and morality. Both women live their codes and both women move in the direction of harmony, but this is one thing they can not achieve.

Janine, played by Amdrea Gallo, remains adamently sedate and professional. Though she enjoys Zoe’s fervor she is troubled by it. In her endeavor to control the conversation she is turned sideways when it is revealed that their talk has been recorded and can be used against her in a radical, on-line chatroom. Gallo plays all of this in a democratically professional manner, her voice calm and adult with only her body betraying Janine’s emotional reactions. It is exciting to watch her work through the traumatic revelation of what has happened. This actress is a teacher, not only as a character but as a profesional doing her real job before us, showing us how an actress interprets the realities of a role. 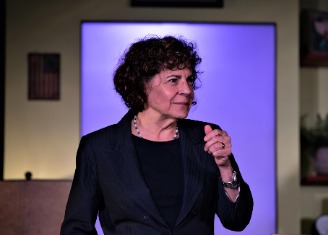 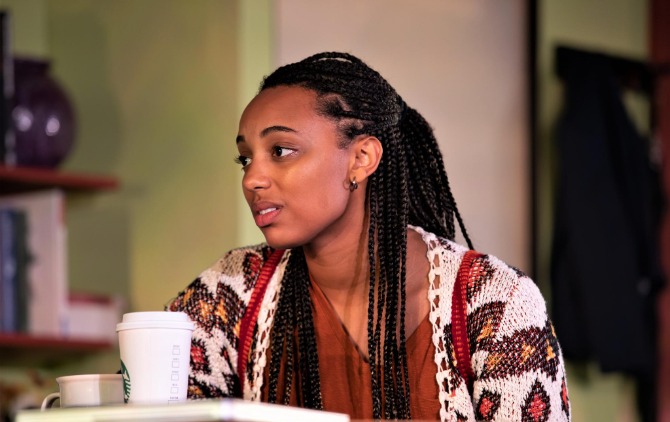 Zoe is the driving force in this play. It is her quirky behavior, her changes in mood and attitude that give the play its life-force.

Though Janine is anything but passive Zoe controls where the plot takes us. She changes the conversational tone in both scenes and she is ultimtely both better and less better for it all. Stephanie Everett plays Zoe for everything that can be drawn from the part. She moves from submissively sweet to diabolically mean in record time but with complete control of these alterations. Her work here is superb.

Lovely to look at but dangerous to admire, her Zoe, like the character’s name, is difficult to reconcile and hard to explain. In both cases the casting of this play finely matches the play’s needs.

Director Christina Franklin uses the containment of these two women in a college office as premise for the difficult relationship. While the dialogue is intimate the movement within such a space is not, except when Zoe is secretly recording her teacher. The use of distance becomes a singular factor in how they address one another and that is a critically important factor. Franklin has chosen her physical placements accordingly. The set, designed by Juliana von Haubricht, is appropriately crowded with its two areas nicely separated, but there are two blank spaces on the upstage wall that I didn’t understand. Charles Schoonmaker’s costume defined the characters well. Lara Dubin’s lighting was simple and straightforward emphasizing, in particular, the awkward ending of the play.

This is a talky hour and forty minute one-act play. Thoughts, concepts and moralities will be flung at you in rapid succession but the performances make it all worthwhile. I urge you to see it if thought-theatre is what you like. Provocative adult plays aren’t for everyone, but this one is something different.

The Niceties ﻿p﻿lays through Juley 25 in the tent at Hancock Shaker Village e on Route 20 in Pittsfield, MA. For information and tickets go to Chester@Hancock.﻿