﻿﻿"I have always depended upon the kindness of strangers."

The simplicity of this site-specific production is one the things about it that makes it such a fascinating experience. The rustic courtyard is nothing like the southern enclosure it represents,  but it manages to stand in nicely for the original and sitting there with the natural, changing light, the porous stone walls and the utilitarian furniture while women in 1940s clothing act out the famous tragedy is ian actual "fly-on-the-wall" performance we are not often treated to these days. What makes it even better is the quality of the work done by the actors involved. After all this time, all these years of seeing this play, to be moved by its tragic denouement is no small miracle, but moved I was by the finesse in the work done by a fine group of actors.

I had hoped to find professionals and that was just what happened this stormy Sunday afternoon. A team of professionals delivered the play whole and complete and played for all its worth. Tennessee would have been pleased. Everyone else was, certainly. 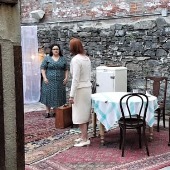 While most people think this play is about Blanche DuBois and her fragile sanity I have always believed it to be about her sister Stella and her resilient hold on reality. From the first moment in this production Stella's devotion to the life she has chosen to lead, and to the man she has chosen to follow, is firmly established and relentlessly held on to. Erin Ouelette has her feet firmly planted on the ground in this production and through the long, dark ride that Blanche takes her on, she never releases her hold on the reality of her situation. Ouelette's Stella is sure of her choices and while she may occasionally doubt Stanley's humanity she never denies his love and devotion even in his cruelest moments.

As her sister Blanche, Janet Hurley  Kimlicko brings the fragile mind onto the stage instantly and she slowly fades in front of us into the sham Blanche has been forever and always. Kimlicko is beautiful in the role of a Southern Belle who cannot control her urges, her reactions or her mouth as she spouts her thoughts into the faces of the people she is thinking about. Her mental losses are perfectly charted and appear in her arms, her neck and her hands. Her final line, spoken to a man who has come to escort her out of the Kowalski lair is as beautifully rendered as any I have heard in the past. All around me tears joined the gentle rain that had falled all afternoon on the courtyard playhouse. 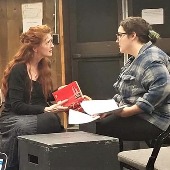 James A. Wild was a powerful, though not handsome, Stanley. Sexual strength is what this role requires and it was nicely delivered by a man who could be the animal Blanche discovers in her brother-in-law. Wild offered no sweetness, but there was a wonderful vulnerability to his Stanley, a trait he kept in check most of the time, as is appropriate, but that was clearly there none the less.

The fourth corner in the love story of the play was provided by Tony Pallone as the sad-sack Mitch, a former G.I. who could love Blanche if she was who she claims to be, but who can only reject his one chance at the pleasure love can bring because of his high-minded morality. Pallone is terrific in the role.

The rest of the company delivers their roles nicely, most especially Catherine Seeley as Eunice, Travis Fealy as Steve, and Michael Glantzis as the Young Man.

Dr. Krysta Dennis has directed an excellent production of the play and costume by Bonnie Fitzgerald seemed authentic and added immensely to the truthfulness of the play.

Site-specific theatre is a favorite of mine. It could become yours as well, if you let it. 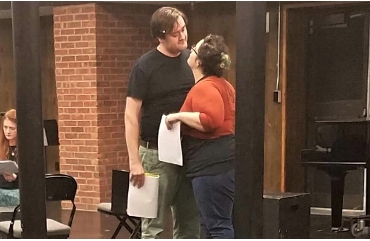 A Streetcar Named Desire plays at the Albany Distilling Company, 75 Livingston Avenue, Albany, NY through July 8. For information and tickets go to their website at NortheastTheatreEnsemble.org or call them at 518-526-9170.