Based on the comic strip "Peanuts" by Charles M. Schultz

When Clark Gesner began to work on his show "You're a Good Man, Charlie Brown" I don't think he realized what a national venture he was creating. With a group of actor friends he sketched the show for a couple of years in the early 1960s and the show itself first saw the light of day (or the stage lights anyway) in 1967. It was a big his off-Broadway with a cast that included Reva Rose as Lucy, Bill and Skip Hinnant, Bob Balaban, and Gary Burghoff as Charlie Brown.﻿ In addition to the musical numbers the book showcased dialogues straight from Schulz's comic strips. Gesner and friends recorded a concept album in 1966, still with no idea of writing a show. It was his luck that producer Arthur Whitelaw heard the album and decided it has the making of a show.  When he finally produced it at the Theatre 80 St. Marks in the East Village where it ran well into 1971 it had a character named Patty (NOT Peppermint Patty) played by Karen Johnson. The show became a favorite in stock theaters, community theaters, schools and so on.

ttfter a London success and years of tours, followed by a TV special, it was given a Broadway revival in 1998 which featured Anthony Rapp as Charlie Brown, B.D. Wong  as Linus, Ilana Levine as Lucy, and Stanley Wayne Mathis as Schroeder. Also featured were Kristen Chenowith and Roger Bart as Sally (who replaced  Patty) and Snoopy. Chenowith and Bart both won Tony awards  for this show. A new character meant new songs and sketches. It is this edition (Revised)  that has been brought to New Lebanon at the Theater Barn.

The company of players at the Theater Barn are all young and fresh and accomplished enough to create, sustain and present these classic characters with verve and style. For nearly two hours they frolic, charm and give us Charles Schultz wise comprehension of what kids are and how they present themselves to the world. They are each as distinctive as their characters. 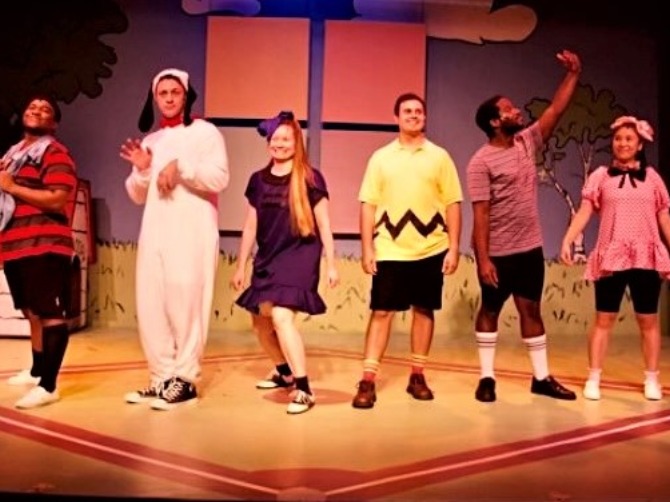 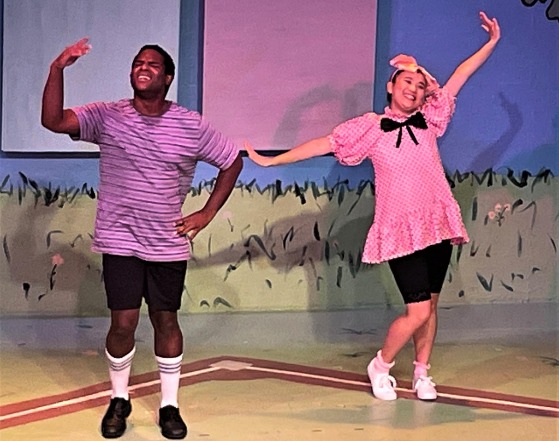 Cavorting through childhood with adult view-points is Schultz's gift to us in his comic strips. The musical's gift is equally important here and the cast makes the most of it. Kyle Jack as Schroeder often says pithy things which land hard, particularly on Lucy. Her adult adoration of Schroeder, played nicely by Raina Fraley, often bring out the emotional waterworks we experience with her.  Charlie Brown's impulsive baby sister, played by Emily Song Tyler, gets even further down into the emotional dumps. She is seldom appreciated by the others because of her youth. Tyler gives her lots of energetic attempts to fit in and half the time she makes the grade. It is fun when she does and funny when she doesn't.﻿

Each person on stage in this show has many moments of pure entertainment, good for young and old. I found myself laughing where I thought I wouldn't . The sad sack Charlie is given every depressing moment he can find and Christian Ortega plays them well, more often than not, especially those involved with baseball or the red-haired girl.  Raina Fraley is a harsh, self-absorbed Lucy who will not see her bad side even when she begs for the revelations. Her little brother Linus, played by Brett Hennessey Jones finds a hundred different ways to employ his blue blanket and each one makes its own peculiar sense.  The inevitable scene stealer, Snoopy, the Beagle, practically steals the entire show every time. Whether fighting the Red Baron or savoring  his supper, Jarod Bakum trots off with the show. Very Snoopy indeed!

The physical production is as good as the cast.  Sam Slack's flowery, comic book set works perfectly. and Joseph Sicotte's lighting complements it. Kara Demler's costumes look just right The band, under the direction of Kevin Francis Finn never misses a beat or a note. Rebecca Frazier's impeccable direction holds it all together and keeps us alert and involved from beginning to end. While the cartoon may be aimed at adults the show is definitely a familly treat. All local families be on the alert here: SUITABLE FOR CHILDREN. If I could I'd go see it again.

You're a Good Man, Charlie Brown continues its run at the Theater Barn, 654 Columbia Pike (Route 20)  in New Lebanon,  NY through September 5.  For information and tickers call 518-794-8989 or go to their website at www.thetheaterbarn.org