When did you last h﻿ear a comedy referred to as rough and raw? This one certainly is. David Lindsay-Abaire's 2011 Broadway play, Good People, took two Tony Awards - Best Play and Best Actress for Frances McDormand - and is now on stage in New Lebanon, New York at the Theater Barn. It's leading player is Kathleen Carey, an actress who has given many defining performances in the past and this time around gives one "helluva"  run to the role of Margie Walsh. The actress plays the quixotic moods of this woman, the variable truths and falsehoods that sometimes cannot be authenticated or corrected. Margie is desperate. She lives with her adult daughter whose undefined ailments nearly destroy Margie. The woman cannot hold onto a job; she lives with debt and anxiety. Her good friends Dottie and Jean support her through the tough times; Bingo sustains her emotional peaks. This is a comedy, defined as a play in which  no one dies, and no one does. That can be said for it.

Desperate for work she contacts a former boyfriend, Mike Dolan, now a successful doctor, and almost blackmails him into inviting her to a party at his house in a much more fashionable section of Boston. Her motives seem simple but this devious woman is a manipulator who tends to screw things up. That is what she does. It's a comic situation which turns into active melodrama in her not very facile hands.

Mike and his wife Kate do what they can to make the situation possible but Margie inevitably screws things up again. Lindsay-Abaire is brilliant at taking a Marx Brothers comedy moment and turning it into an agony of reality. This play is a marvel of good possibilities gone wrong and each incident seems to make things worse instead of better. There is comedy in this, but it fights its way through the tears.

Dottie, Margie's friendly landlady, is played by Lisa Franklin who is very good at playing both sides of an intention at the same time. As Jean, Angela Portrikas is a much appreciated force for good. Margie's former employer and Bingo-buddy Steve is portrayed by an amiable aggressive Joseph Sicotte. The Bingo calller is voiced by Sam Slack. Slack also designed the five sets for this show and Sicotte contributed both the lighting and the sound designs. Both men have helped the show mightily.

Kate is played by Kim Wafer whose line readings were fine, but whose voice was so quiet she could hardly be heard. As her husband Mike, Margie's former high school boyfriend, Christopher Brophy turns in a marvelous, strong performance. A man maligned by two women at the same time, though for very different reasons, Brophy manages nicely keeping the two women separate but equal in  strengths. He contends with both very well and under Phil Rice's perfect direction manages to sustain the comedy while experiencing the tragedy of Mke's life. Brophy is powerful in this part. He is attractive and makes  that an uglly thing to be.

This disturbing little comedy won't please everyone, but, after all, nobody dies and the characters and the story are different, amusing, a little bit scary and a perfect delineation of the Southie experience. 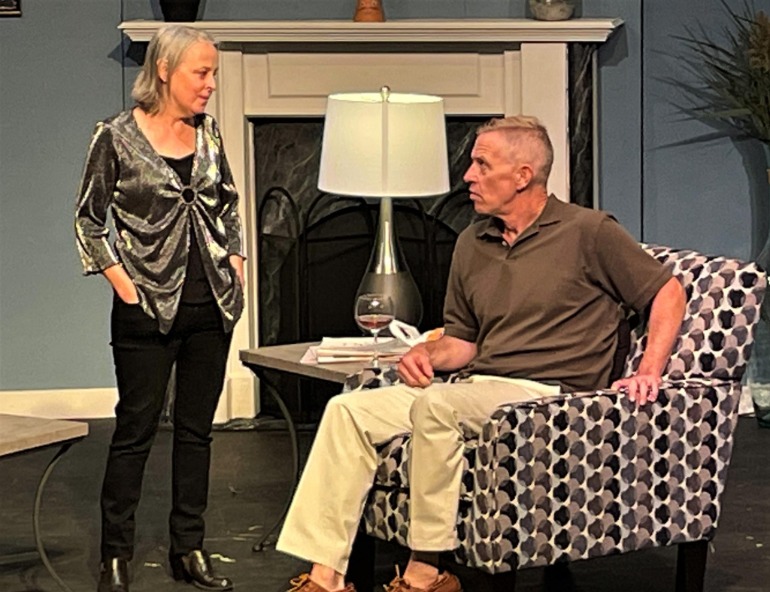 Good People, a play about bad people, plays at The Theater Barn on Route 20, just west of the town of New Lebanon, NY through September 19 . For information and tickets call 518-7948989 or go to their website at   www.thetheaterbarn.org.