"Don't you ever go near our Billy again!"﻿

In 2000 Lee Hall's film, "Billy Elliot" directed by Stephen Daldry hit screens around the world and forever changed the way we look at boys who want to dance. It was so successful that it took less than five years for Lee to turn it into a big splashy musical which went on to play for 4,600 performances in London spawning a youth theater project, a live world-wide television presentation, and a score of other events including two Australian productions, Canadian, Hungarian and Israeli productions and a 1,300+ performance Broadway production for which all three boys who alternated in the title role won Tony Awards. It is also the first show to deal with gender-bending roles and open school discussions about homosexuality, homophobia and related topics. This world-class musical is now on stage at Goodspeed Musicals in East Haddam. Connecticut where it is set to remain through November 24. It should stay longer. . .much longer.

Set in County Durham in Northeastern Britain during the 1984-85 coalminers' strike the story is about how a youngster manages to find his way out of his poverty-stricken environment and into a world of artistic possibilies he has never conceived of prior to meeting a local dance teacher who discovers him and his talent. Partially based on the 1935 novel "The Stars Look Down" by A. J. Cronin (the opening number's title is the same) the show tells of a motherless boy who finds her through a letter she has left behind for him and finds his own confidence through the difficult circumstances he encounters through wanting to be himself and not what his father and brother demand of him.

The young actor I saw on the official opening night was Liam Vincent Hutt (he has only one other Billy to share the stage with, Taven Blanke) who proved to be an emotionally controlled actor and a wonderful dancer/singer. One of his tasks is to project the growth his character exhibits as a dancer and this 13 year old boy did a superb job with Billy's advancement from his initial attempt at the formal ballet and his movement "improvisations" to the highly skilled young professional he will become. As an actor he held all the cards as well, playing the harsh family relationships that mold him into the inteligent young man he is destined to be. 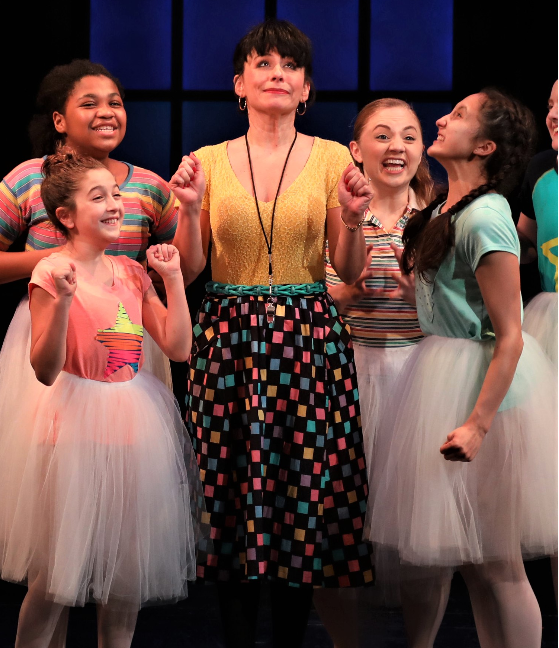 Billy's teacher and mentorMrs. Wilkinson was effectively played by Michelle Aravena whose own skills cannot be ignored. She plays the empathy of an invested teacher who can see both the potential and the potential loss of genuine talent. Her scenes with Billy's father were intense and moving. Her part in the trio "The Letter" was sincerely moving. Her pride in Billy, the equivalent of a mother's blind pride in the accomplishments of her offspring,  must be hailed as one of the more moving aspects of this performance.

The quintet of balletl girls under Mrs. Wilkinson's tutelage were wonderful dancing around the stage whenever required.

Production numbers go a long way in making a musical memorable. While none of Elton John's songs have stayed in my head, their presentation in this production certainly made mental inroads. In particular the second act opener, "Merry Christmas, Maggie Thatcher," with its giant puppet and a stage full of dancers and singers impressed immensely. Director Gabriel Barre uses every inch of Walt Spangler's basic set throughout the show, but in this particular number he keeps the stagecraft centered on a political figure whose actions and pronouncements in the time of the play figured as monumentally as the puppet does in the number. In our politically-centric era it is marvelous to realize that even the worst of politics can give us the most amusing images to hold on to.

At heart, though, it is the simple family dynamic that holds the story of Billy Elliot together. Billy's family, historically coal miners, are simple folk for whom the arts center around the fiddler at their dances and the religious pictures on their walls. Billy's urges and his talent are incomprehensible to his dad and brother. This makes the central plot struggle not about his ability and his future but about his present and his relationships at home. Without a mother to give him support he is left to his own devices to explore the possibilities and they remain glum until very late in the show when his father begins to understand that there can be more to life than just sustaining what has been. Sean Hayden does a wonderful job with the emotionally restricted man. In both dramatic confrontations and some very funny comic ones (there is a scene with a cigarette that is hilarious) he manages the most character-growth of any character in the show.

The musical-comedy professionalism of Barbara Marineau as Billy's Grandma adds to the confusion of his homelife and, as his brother Tony, Gabriel Sidney Brown acts his way through the most difficult transition in the family group. The character of Dead Mum, played by Rachel Rhodes-Devey, pulled tears from an audience filled with folks already devastated by Billy's mistreatment by his father.

As much as anything it is the dancing in Billy Elliot that makes the show what it is. The aggressive/protective movement of the chorus of striking protestors as backdrop to the more formal dance of the ballet studio keeps the two elements of the story deep set in reality which is an odd thing to say about the political drama of unionism in industry as a musical. Marc Kimelman has choreographed the show in such a way as to startle reality. We are literally kept on three levels of genuine emotion from start to finish. It's a brilliant concept that works.

This show deals with so many things it becomes hard to write about just the central emotional conflicts. For example, this show also deals with gender identity in the young. One character, Michael, a younger boy who is a friend of Billy's, has a passion for cross-dressing and he introduces this to Billy. In one of the best songs in the show, "Expressing Yourself" they dress up, sing, dance and explore the pure enjoyment of just being free to be. Michael was played by Jon Martens whose quiet moments almost steal the show.

"Billy Elliot" at Goodspeed Musicals is one of those shows that I cannot say enough about. It provokes the cry of "how much talent is there in this world?" and how can we experience it all? Director Gabriel Barre and his design team, including costume designer Jen Caprio and lighting designer Jason Kantrowitz and sound designer Jay Hilton and music director Michael O'Flaherty deliver an exceptional product here. Barre's vision for this show is a clean, judgement-free look into the world we live in today and how we got here. It's a message worth hearing and seeing and if, like me, you break into periodic tears during the show it's what you should be doing. Definitively.

Billy Elliot plays at Goodspeed Musicals in the Goodspeed OPera House, East Haddam, CT through November 24. For information and tickets go to goodspeed.org or call the box office at 860-873-8668.