The Trip to Bountiful, by Horton Foote. Directed by Ted Pugh.

Old-fashioned theater is a wonderful thing. A play takes over two hours to tell its story and, because its a good story well told, you don't mind spending the time. Horton Foote's seminal story is that sort of theater. It's long and you definitely don't mind, especially in a production like the one at PS21 black box theater in Chatham, NY. This is The Actors' Ensemble production with the incredibly talented Fern Sloan playing the leading role.

﻿﻿Sloan plays Carrie Watts, an old woman living uncomfortably with her son and his wife in a two room apartment in Houston, TX. She hates her life and has only one wish, to see her hometown one more time before she dies. Her wish is denied her by her daughter-in-law who seems to take great pleasure in making her husband's mother miserable. So she does what any unhappy person would do - she runs away from home. While her lifestyle takes up much of the first act, it is the journey Carrie takes that is the story here and this company takes great pleasure showing the trip back to the town of Bountiful on the gulf coast where an old lady's dream lives up to its potential - and further as well.

Sloan is surrounded by a stellar cast including Joey Sorge as her son Ludie and Bethany Caputo as his infuriatingly selfish wife, Jessie Mae. They are an ideal couple of ungrateful young-uns living partly on Carrie's retiree's checks.Both actors portray their characters with clarity and a dryness that makes them far too real to be tolerated. 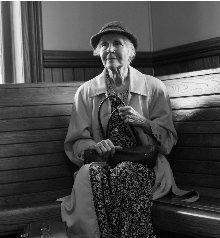 The people she meets along the way truly make the story delicious. There is Thelma, a young bride missing her soldier husband played beautifully by Salome M. Krell. There are the station ticket clerks played by James Gavin, Jonathan Hyland and John McManus, each of them a very different sort of man. There is the Sheriff of Harrison, Texas whose stern demeanor melts into humanitarian when Carrie nearly dies in his arms, played here with an emotional security that was glorious to behold by Eddie Allen. All along the way on Carrie's precarious trip these people do what people are supposed to never do. They fall under the remarkable spell, the delicate web woven, by Fern Sloan's intricate realization of Carrie Watts.

She has been directed to perfection by Ted Pugh. Without a single misstep Sloan moves relentlessly forward refusing to be held back by age, illness, by the tragic tale itself, tragic only because the inevitable is always before us and before Carrie's attempt to realize her twenty year old dream. This is a play about the sense of mission and the clarity that she and the company bring to it is unparalleled. You don't care that it takes two and a half hours; in fact you hate the fact that it's over. That is great theater, folks.