Sometimes an experience just takes you back to better times in your life. The new Audible presentation of Willamstown Theatre Festival's production of Tennessee Williams' play "A Streetcar Named Desire" gives the theater afficianado an unusual and rare ability to listen intently to the play that Williams wrote rather than to watch a physical production of this 1947 play with its elaborate set and period costumes. The lines spoken by each character become more important for there is no personality to watch, no undershirt for Stanley, no expensive costumes for Blanche, no simple frocks for Stella. The play's visuals become those your own mind creates. When Blanche refers to the squalid surroundings, when Stanley seems physically imposing, when growing mania creates more impossible imagery it is all created by the listener. Frankly, it's wonderful to be in the realm of "radio" and it does indeed take you back to better times,  an era when the mind of the audience played a real part in theatrical enjoyment. 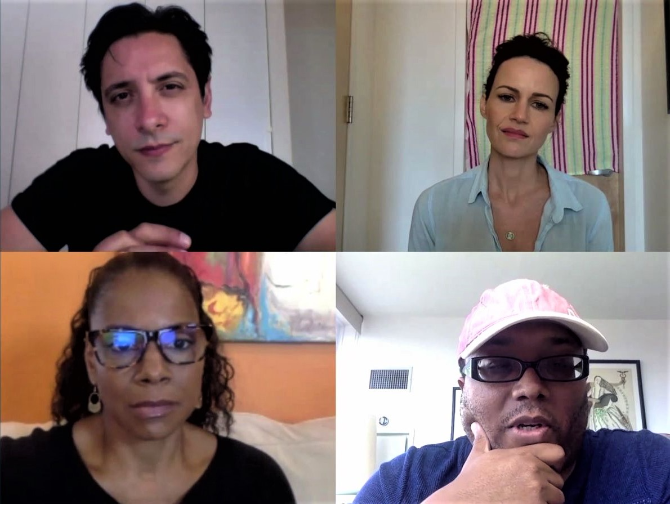 It makes you wonder, for example, about the difference between a prostitute and a whore. Blanche DuBois has fallen on hard times back home in Laurel, Mississippi. She has encountered family deaths and the cost of dealing with that. She has lost her teaching job due to sexual misconduct with a student. She has lost the family home to debt and has taken up residency in an inexpensive hotel which normally rents its rooms by the hour. She has also never gotten over the death of her young poet husband. She has taken to the "casual" friendships with strangers. She has, in fact, as she states at the end of the play "always depended on the kindness of strangers." What she does with them is what she needs to do both to survive and to emotionally find some stability.

What she does is not prostitution - the sale of her body for sexual favors. Rather she is pursuing an unwholesome desire for emotional satisfaction. So what if she accepts a fee or an expensive gift? It is less the needs of others to be satisfied than it is the deep need of this woman to be appreciated. She is played here by Audra McDonald, a superior actress who makes it clear that Blanche's selfishness emerges from loss and humiliation. The truth of her motivation supports her slim hold on reality as is clear in McDonald's use of Williams' language which is finer and more precise than I had previously realized.

Blanche's married sister Stella is played by Carla Gugino. It is a very different interpretation of the role than I have ever encountered before now. This is  Sisterly love dependent on independent non-judgement. Gugino makes it very clear that she does not need or depend on Blanche's approval for anything including on the man she has married, Stanley Kowalski played here by Ariel Shafir.  Gugino is verbally aloof much of the time, sweet when necessary, harsh when important. Her separateness from Blanche is important for the listener for both women have a lower register speaking voice and the two actresses differentiate their characters through attitude rather than vocal tone.

Shafir is a perfectly annoying Stanley. His indifference toward both women at time is consistent with the writing and his concern for his wife's financial losses due to the family deaths are clearly personal loss-oriented. As he turns more bitter toward Blanche Shafir gives his voice an even edgier sound as he pronounces his words with a harsh, ugly clarity eschewing the usual Marlon Brando mush-tones we've all grown used to actors employing.

There is no program available, but I believe that the role of Mitch has been played by Sullivan Jones. If not, then my comments refer to whichever actor has the part. He is excellent also. His scenes are not as abrupt and awkward as some have been including that of Karl Malden. For this and for much already referred to credit must go to the director Robert O'Hara. His work on this play is perfect, enriching the play immensely.

Kudos also go to Lindsay Jones, the sound designer and composer and the dialiect coashes Dawn-Elin Fraser and Deborah Hecht as well as to the intimac director Claire Warden. The final product is lovely indeed.

This is the first of seven weekly plays from Williamstown presented in this manner, and they are very welcome at this time. The rest will all be new plays. Watch this space.

The show is available, the press release indicates, to "Audible listeners around the globe" and there is no time limit indicated. It also states that special access is available to eligible WTF donors. For more information consult their website at www.wtffestival.org/support.  i