A Raisin in The Sun, by Lorraine Hansberry. Directed by Robert O'Hara. Reviewed by J. Peter Bergman.﻿﻿

This is a classic American play, produced almost more times than you can count, revived, filmed, televised, exported and revived again. The version on stage at the Williamstown Theatre Festival is the least often produced, one with an extra character and some additional bits, played in two instead of three acts and in this instance somewhat reimagined to include a character on stage, actually speaking lines, who isn't acknowledged in the program. Conceived as a ghost or the vision of Lena Younger, matron of the Younger family, only she can see him and physically acknowledge him. He must be a ghost for he has been forgotten or ignored by the company. I believe him to a figment of the director's imagination and he should have remained just a figment, for my money. 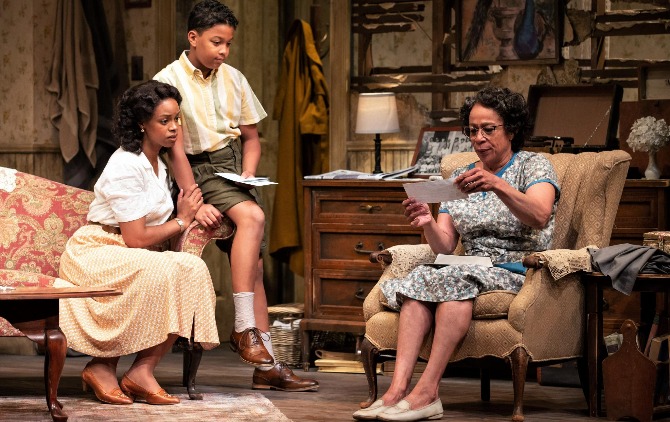 When a play is this well known it is hard to take its forkfuls of sentiment and political rhetoric with a slotted spoon, but that is what has happened here. The actors are all well chosen and well directed, though the optimism in this retelling of author Lorraine Hansberry's own family story has been replaced with a harder ghetto-mentality overview. Much in the story has always been harsh and defiant, but there has always been a good amount of old-fashioned heart in the play and that seems to be missing here. Nowhere is that more obvious than in the new visual ending which is a historically accurate picture of the times, but is nevertheless disturbing, replacing the forward outlook Hansberry provided with pessimism and heartbreak that the director, Robert O'Hara, has imposed.

In this day and age when our sitting government seems intent on a return to the days when this play was written it is a logical message to send to an audience, but with so much on television and in the press on a daily if not hourly basis it would have been just fine to let the playwright, clearly one of America's most treasured, leave us her own vision of a future that is now eluding us. We know where things are headed; we need our optimism back and this production is denying us that privilege.

The Youngers live in the ghetto squalor that they can afford, an apartment on Chicago's south side that Lena and her family have occupied since she first married. Her son, Walter Lee, wants out and he wants it on his own terms. His mother is about to receive $10,000 in life insurance and he want to invest it, with two friends, in a liquor store. She, on the other hand, wants to buy a suburban house for her family and help her daughter with her medical education. This quarrel is at the center of the play's conflict. Mother and son want the same thing but want it from different directions and sources. He, a chauffeur for rich white folks, is losing his sense of manhood and superiority and he needs back his self-assurance as much he needs money to acquire it. Francois Battiste in a Chicago black accent is so angry that he is literally almost not understandable as he rants his way through his lines. He has wonderful moments, but he has not as yet found a solid, consistent performance.

S. Epatha Merkerson, however, as his mother Lena, has hit her stride turning in an even-handed and sturdy interpretation that could use a bit more fire, a bit of Battiste's understandable rage. Her Lena is the sweetest woman, a mother with so much understanding that she can forgive her children everything. She is lovely, loving and lovable and she expresses disappointment and disapproval nicely but when Lena has to deal with her son's betrayal of her trust she is too conciliatory to be believed completely. Lena's love and her belief in the future is what drives this play, not Walter's anger, but Merkerson almost gives it up to Battiste, almost but not quite. 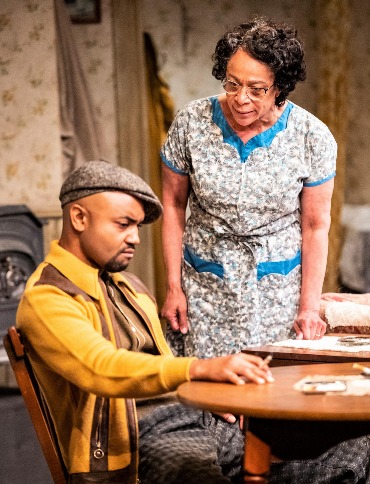 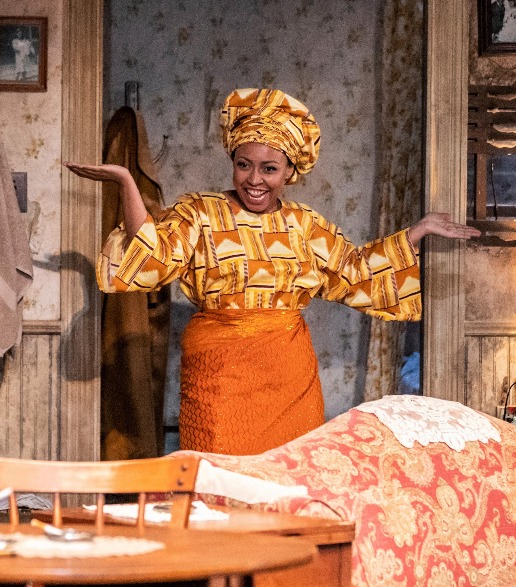 Ordinarily in productions of this play the lightness comes from Walter's sister Beneatha, a college student whose ardent reactions to things are as comic as they are heartfelt. She has two boyfriends, an Ethiopian who wants to marry her and whisk her away to Africa and a wealthy black Chicagoan who takes her on expensive dates and tries to upgrade her attitude and her mindset. While all of this still exists in the play, Beneatha is a bit more hostile than usual (she always argues with her brother) and that colors all of her reactions to the world around her. Nikiya Mathis is a fine Beneatha, except she shouts a bit too often for my taste. Diana Sands who originated the role later became a friend of mine and my mind and heart are still literally filled with her voice and her talent and no one will ever be able to replace her in this role, not for me.

Mathis does a fine job in this production and she is wonderful in her scenes with her African Prince, Asagai, played with handsome charm by Joshua Echebiri. He provides Mathis with the perfect swain, a bit too overpowering but still romantic and not really pushy, ardent but not possessive. He makes it easy to see why Beneatha might consider leaving her argumentative family and Ruth, the sister-in-law she loves, for the adventure of an African life. 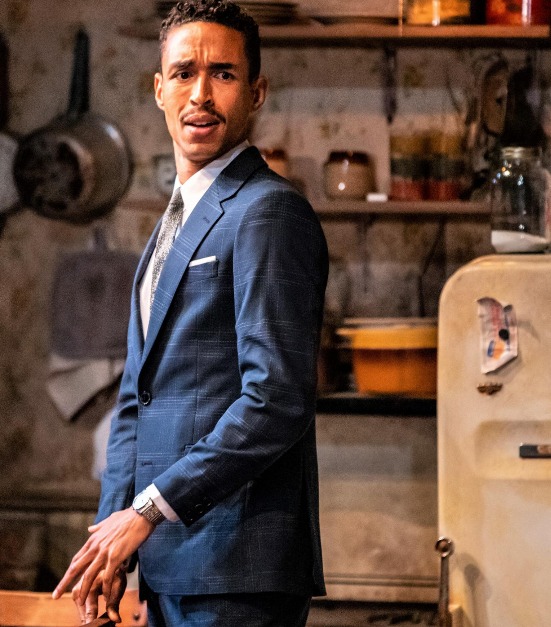 As George Murchison, her other suitor, Kyle Beltran turns in a fine performance. He is not the romantic figure that Asagai is, but he has charm and a directness that is effective in his pursuit of the girl. Beltran's George is obviously seeking a wife and he will pursue this one in every way until she must give in to his wishes. It's a very honest portrait of the man and I enjoyed it very much.

The representative of the all-white suburb Lena want to move into is played by Joe Goldammer in a very solid performance. His second scene is particularly effective.

In the role not usually seen, Mrs. Johnson, a neighbor whose gossipy, grasping personality adds little to the play but is fun to watch, is very well played by Eboni Flowers. Her intrusion on the difficult proceedings involving the family's impending move breaks up the drama and brings a touch of sardonic humor into the works which was very much appreciated.

Travis, Ruth and Walter Lee's son, was played by Owen Tabaka whose professional experience on the stage in New York pays off in this role. Not whiny in the least he holds his own among the adult company and gives some focus to Lena's yearning for something solid to create for her family.

For emotional flexibility and pure character creation no one in this company delivers more perfectly than Mandi Masden as Ruth Younger. She is nothing short of compelling. Every movement, every word, every gesture and every emotion is played with complete immersion into the character. In spite of being pretty I don't think I'd recognize her outside of the character she was so involved with, with what she was doing, who she was being. I don't use the term consummate actor often, but I think it applies in this case. It's either that or she has actually lived this life before and is just repeating it on a stage for the heck of it. I'm going with my first impression, though, and not this latter one.

The production team have done a fine, fine job for this play. Set in the living room/kitchen of the Younger apartment, the set by Clint Ramos tells us everything we need to know about their financial status. Alice Tavener's clothing makes everyone look as good as their economic functionability will allow. The lighting by Alex Jainchill certainly sets the time, the mood and the place. The sound design by Elishebeittoop was uneven, often too loud. Robert O'Hara's direction served his own vision as well as the play, his vision often winning and I am not happy with that vision for this play. Still he had exceptional people to work with and they have served him very well, allowing what he wanted to be seen to be seen without a doubt. 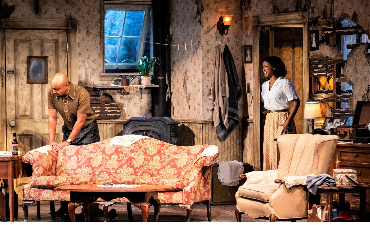 A Raisin in The Sun, plays on the main stage at the Williamstown Theatre Festival in the '62 Center for Theatre and Dance at Williams College, 1000 Main Street, Williamstown, MA through July 13. For information and tickets contact wtfestival.org or call the box office at 413- 458-3253.