by Will Eno. Directed by Keira Naughton.  Reviewed by J. Peter Bergman.

Will Eno's one character masterpiece is the season opener for Chester Theatre Company in exile. In their tent at Hancock Shaker Village in that strange pocket of space bordering Pittsfield, Richmond and Hancock, Massachusetts, the company has staged this unique mono-drama about connections lost, found and sought. It's an appropriate setting as designed by Juliana von Haubricht, a sort of "No Exit" with an operating door. Occasionally outside sounds intrude on the space (a cow mooed twice on opening night from two fields surrounding the tent) leaving the impression they were supposed to do just that and on cue. That perception of theatrical reality is due, almost entirely, to the talents of James Barry who plays the Man, the only character we meet, without regard to the many people he talks about during the play, including his mother, now dead, and a blonde he has recently met whose whereabouts and fate we never learn.

﻿﻿﻿Our Man can't explain himself. He sees us in our seats; he greets us and addresses his auto-biographical self to us, but he never knows us or who we are or why we're with him. He is grateful to have us handy, nearby, comforting him and yet perturbing him with our silence. He is a stranger in our land, newly arrived but not sure how long ago or where his journey might take him next. He carries all of his worldly possessions with him, uses language to lighten the mood of varioius encounters but can't make his sense of humor pay off. It is as if the words he speaks are not really our words at all. He is nice, pleasant and earnest but he cannot connect in spite of all his attempts to do so. He is an enigma.

A play about an enigma is itself an enigma and enigmaticism (not a real word) provides both him and us with a puzzle about reality. Just an hour and four minutes after he arrives he is off again, his few possessions held in a carpetbag, his mind taking a new step in a new direction which might be the same direction but might not be much more than a continuation in a different new place of the same goal, to make connections that bear the fruits of such a journey. 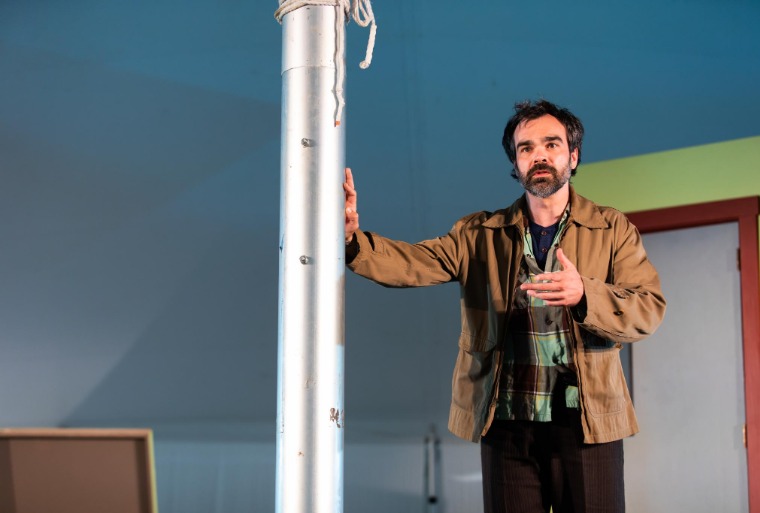 I don't believe that just any actor could create a "Man" so perfectly, so beautifully, so able to hold us imaginatively. Thank goodness the theater company had James Barry on their roster. He has been a fixture on their stage for five seasons. This is sixth production for them and it is probably going to be the one most people will remember in the future. This one drags his musicality from him into a world that has no music (not counting the cow's "mooo"). It asks him to speak non-sequiturs with a ring of truth. It almost delights in his ease with subject changing in the middle of a thought. There aren't many actors who can handle the quixotic verbiage of "Man." Barry plays the universality of this quirky individual in spite of the very specifics of his history and his character. This is the one-man show to see even if, as I do, you don't like the idea of a one-man show. 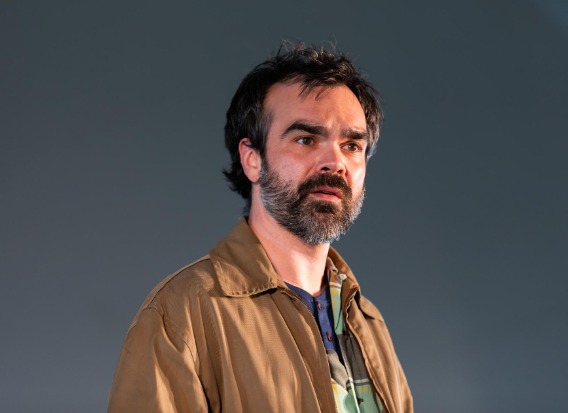 Eno has written a play in which simplicity is complicated.  He is fortunate that for the Massachusetts premier of this wonderful piece the company has engaged director/actor Keira Naughton. Exactly how she has managed to keep us riveted to the face and hands of James Barry is a mystery, but she has done it and kept this strange and difficult piece lively, alive and mysterious. Moving Barry around the stage, allowing him to look at us, see us but not know who or what we may be, is the key to the play's success. All of its difficulties appear to be simple through her work in this endeavor. There is reality where none exists; mystery where no solutions are sought. She and James Barry have been excellent collaborators with this piece of work. There are peculiarities around "Man" in Lara Dubin's lighting design. Barry's traveling around to places costume has been perfectly designed by Charles Schoonmaker.

This most curious and bewildering, nonsensical piece of ultra-reality is one of those shows you need to experience for yourself for no description of it can bring you the wonder of this piece of writing as played by the two artists who have made it so enthralling: Barry and Naughton. I urge you to see it and soon.

Title and Deed in Chester Theater Company's production plays in the tent at Hancock Shaker Village through June 27. For tickets and information go the company's website at chestertheatre.org or call 413.354.7771.