Ten authors are offering up ten one-act (about ten minutes) plays in this annual festival and although a few of them are dramatic and moving most of them are built on the fragile structure of humor; not everyone can react the same way to a funny piece, especially when the jokes are rare and the intent is subtle. A few of these pieces are not exactly subtle but rather clobber you with their joke and that works as well as the other kind of light piece and, in fact, makes a great deal of sense in the arrangement of plays in this two-act structure. One play in the group left me cold as it closed its argument without a solution. One play lost me in its extremes. The other eight won me over heart and soul. However, as everyone in the crowded house is different and coming from different places than I am, let me give you a sense of what the six superb actors and two excellent directors have offered up this February. You'll be amazed, I am sure.

The Plays (in order of presentation) are Five Seconds by Connie Schindewolf, Minor Deviations by Erin Osgood, Closing Doors by John Minigan, Digital Detox by Cynthia Arsenault, Stay, Please by Jessica Provenz, Jill Takes a Leap by Scott Mullen, Are You One of Those Robots? by Deirdre Girard, With Improvements By the Actors by Ann Marie Shea, My Body by Rachel Bublitz, and Oy Vey Maria by Mark Harvey Levine. 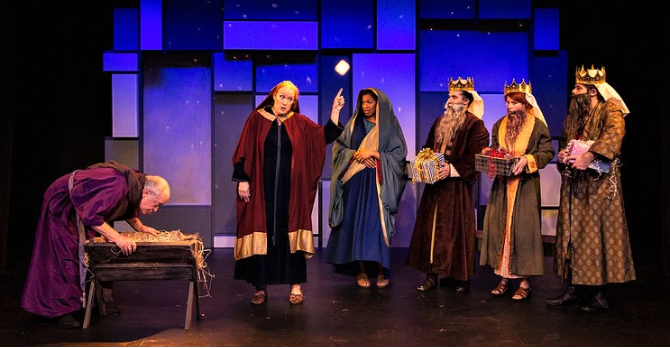 Starting at the end

The show ends with the funniest of the plays, always a good way to send your audience out of the theater. In "Oy Vey Maria," the three kings, or wise men, have come to pay homage to the infant Jesus but their mission to give gifts is interrupted by Mary's mother and father who have followed their errant daughter to the barn on their camel. What happens then is "The Bronx." Led by the incredible Peggy Pharr Wilson into the northern borough of New York City's classic Jewish environmental accent the play assumes the guise of a Yiddish Passion Play and with tears of regret, anguish and good old-fashioned guilt Ann (Wilson) shows her daughter how to raise a Jewish boy. The hilarious concept, by playwright Mark Harvey Levine, just keeps dwelling on this theme until there is nowhere else to go with it. This is one of the funniest little plays I have seen in the past year. Even the three kings are remarkable and this wonderful cast just plummets to the strong base of burlesque humor. If there was nothing else worth watching in these two hours of new plays this piece returns the goods and reminds us of the best of classic sketch hilarity: the Carol Burnett Show, Carl Reiner and Mel Brooks, Jackie Mason. "Oy Vey!" 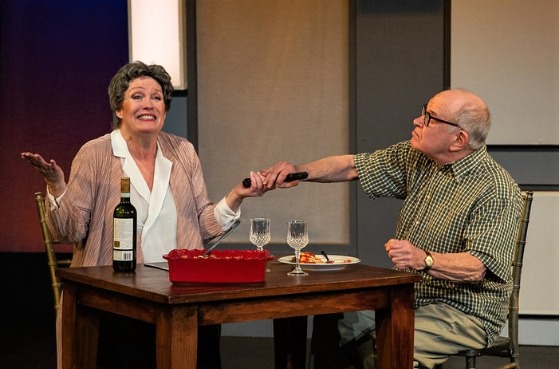 Wilson offers memorable performances in other plays in this series. In the second play "Minor Deviations"  by Erin Osgood she is the efficient and deliberate Townsend representing her company's interests, restoring, with a clone, the lost wife and mother to a family, but with a different outcome in mind. In Are You One of Those Robots? by Deirdre Girard she plays a charitable woman whose beliefs have cleft a deep chasm between her and her daughter. In Stay, Please by Jessica Provenz she is my mother's worst fear: the widow/neighbor with devious intentions toward an older man whose wife has just died. With an eye toward the ridiculous Provenz has provided this woman with a lasagna, a gun and an unbreakable spirit. On the outside she is as cool as a cucumber but passions seethe in her soul and Wilson shows us that through smiles, gestures and posture. It is one of the finest pieces of acting in the entire evening. As her target, Kenneth Tigar is on the top of his game from his entrance disrobing to his gaining the controlling hand. I truly loved this play and its language, spoken and visual, perfectly directed by Julianne Boyd. 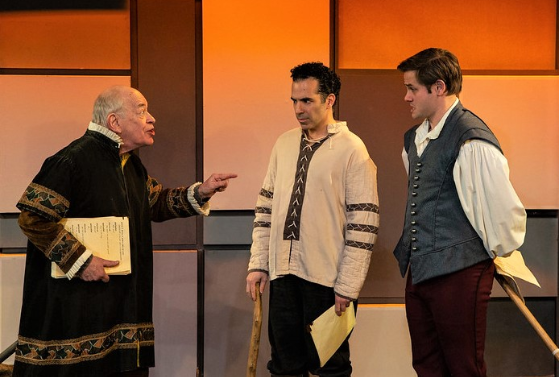 Kenneth Tigar as Dick, Peter Macklin as Jack, Doug Harris as Algernon in

With Improvements by the Actors.

Tigar appears in three other plays in the group including Five Seconds  by Connie Schindewolf which opens the show. Here two actors, Maya Loren Jackson and Doug Harris audition for Tigar's character, Barker, for a series of new one-act plays each lasting only five seconds, the ultimate answer to a growing epidemic of ADHD, a very funny play directed beautifully by Matthew Penn.  Among Tigar's other work here is a short piece, "With Improvement by The Actors"  by Ann Marie Shea, about actors rehearsing "Hamlet" in which Peter Macklin's Jack simply cannot keep his actor's hands off the script which he thinks still needs a lot of work. This lively little play about ego and talent absolutely hits the mark, right on its noggin.

Keri Safran, who appears in the first four plays as well as four more in the second half, does a fabulous job for both directors playin robotic clones, an abused schoolteacher,  an angry wife, a drunken bride, and a pragmatic and controlling HR type. She is a major asset to this company. Major.

An adorable play in the group, Jill Takes a Leap by Scott Mullen, gives Maya Loren Jackson one of her finest roles as directed by Penn. A young bride-to-be is about to bungee jump in order to take advantage of a small window of time before losing her freedom when she discovers that she has fears other than giving up her independence and individuality in marriage. On the platform of departure she confronts her fears and those of three other people. Safran and Micklin are next in line, planning to wed on the way down and get pregnant on the rebound. Harris is the manager of the bungee business, scared of heights and life itself. This wonderful mismatch of desperate souls opens the second half of the show and, for my money, lifts the collection into the stratosphere.

Some of the darker moments in the two hour show are hard to hold onto, though nothing is impossible. It all depends on an audience member's level of acceptance. The directors have excellent assistance from the design team: Brian Prather/Joseph Martin for sets; Trinity Melissa Kich for costumes; Lucas Pawelski for lights; and Alexander Sovronsky for sound. The show's stage manager, Rachel Lynne Harper handles the shifting psychology between and within each play well.

The evening has something for everyone and someone for everything. You can easily fight off the cold weather by journeying into this lively collection of new plays you'll think about for quite a while. That makes it all so worthwhile.

9th Annual 10x10 New Play Festival plays on the Barrington Stage Company's St. Germain Stage in The Sydelle and Lee Blatt Performing Arts Center located at 36 Linden Street, Pittsfield, MA through March 8.  For information and tickets contact the box office at 122 North Street, Pittsfield or call them at 413-236-8888. You can find them at boxoffice@barringtonstageco.org.