Your Best One, ﻿by Meridith Friedman. Directed by Gordon Greenberg. Reviewed by J. Peter Bergman.

This is a claim made late in the play  "Your Best One" by one of the two principal characters in a recent play making its east coast premiere at theRep in Albany, NY. It is not a revelation for the audience, but it is nice to hear just the same. It's one gratifying moment in a play filled with them. Meridith Friedman's work, the second in a trilogy about Richard and David, is an excellent example of a play that without any real surprises still entertains and interests its viewers.  From the awkward first scene, a strange reunion of two former lovers in the kitchen of David's home after an eight year break, to the final moment in a hospital room the play takes these two men on a journey of understanding and it is a nice journey to witness. Thanks to superb actors (all of them) and a director who knows and uses all the tricks of sustaining interest in the commonplace movement of these two men the play succeeds where its plot is most exposed.  Set in 2014 it never leaves its interesting couple of players or moves into the growing clichés of the world we all inhabit. Also, while the focus moves on and around the five people who fill the stage, each of them advancing his or her own personal story, they are keeping the two central characters always at the center of their own lives. That is brilliant, even in its simplicity. 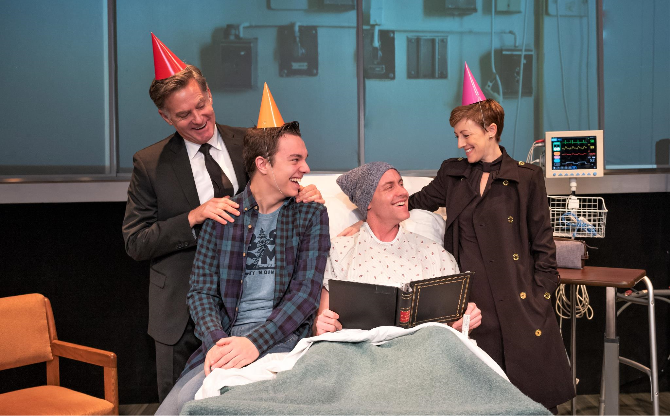 If you've ever paused to wonder what a family unit is really like, there are two examples in this play. Richard, an Internist hitting middle age, has two distinct families: the one he was born into represented here by his sister Laura and his father Oscar; and the one he nearly had represented by David, his younger former partner, and Josh, the adopted son whose existence inadvertently broke up this second family.  The playwright gives us enough of both to show us how the best of intentions, matched by the usual lack of communication, affects both families. Separations, child custody and other family matters dominate the thrust of the play and watching these characters deal with their own intentions makes the stories interesting. And what we discover an hour and a half later is so very obvious from the start that we haven't really paid attention to it is this: love is a support system if we just take it at face value all the time. ﻿

Lenny Wolpe is the older generation, Richard's and Laura's father, Oscar. He is ill, living in conditions that don't please him but attended to every week by his very busy, single and middle-aged son. If they bicker it is because they have always done so. Wolpe is wonderful in this role, trying to make sense of his children and their odd decisions - as he sees them. Not quite a sage, he is still a man who knows when a mistake has been made even when he cannot change things for his children. Confined to a couch, a walker, a wheelchair, he makes his feelings known and he gets his sometimes obscure points across. He has a more than merely humane effect on the main story, and his loving understanding of relationships and affections makes a major difference to everyone. Wolpe pulls out the stops in this role. 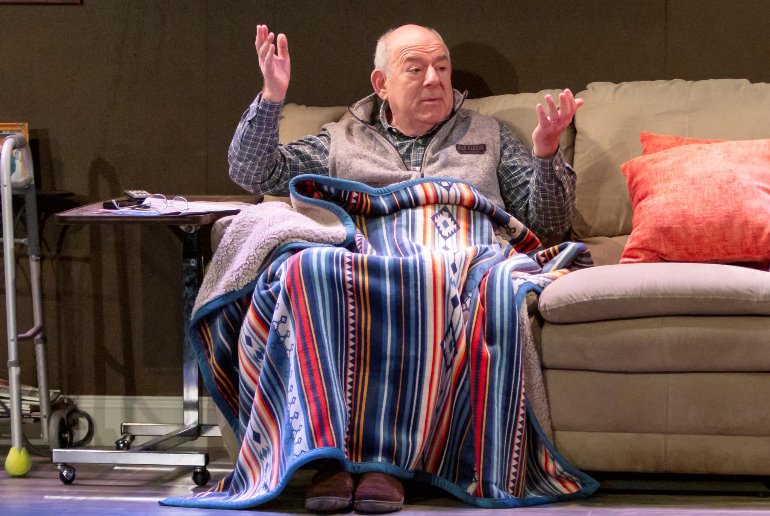 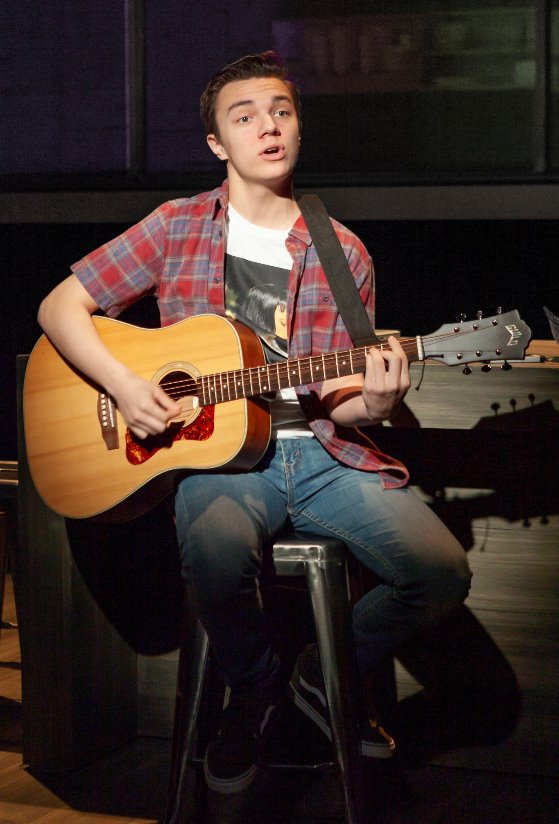 Josh, the son David worked for and wished for, is a talented, personable teenager beautifully played by Jake Goodman who also is talented and seemingly personable. As an actor Goodman is always natural and real and that adds immeasurably to the success of this play. Even in his few hard-to-take moments, his personality makes it impossible to dislike him, although his curiosity about relationships felt a bit odd. Note to author: this boy cannot have noticed his father's honest friendships with other men during the eight years of his fledgling maturity.

That aside, the character has charm and the actor playing him knows how to show us that aspect of Josh. The teenager's immediate reaction to Richard is just one aspect of his unique sense of perception about his father (David). His growth is minimal during the extended period of time this play covers, and that is because of his real and honest respect for both of these men. 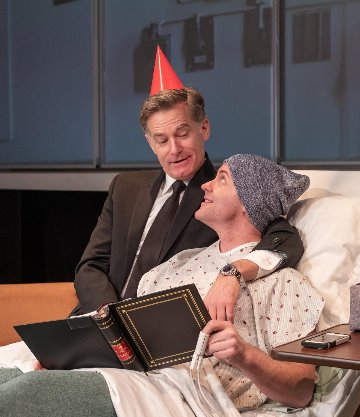 The play is about men, three generations of them caught up in the unanticipated reunion of Richard and David. Josh knows nothing of their history; Oscar knows some of it but has been denied knowledge of what has transpired which also seems a false step on the playwright's part. As we learn David was an active part of Oscar's family unit and that has fallen apart though Richard covers that up when talking to his father.

David is played perfectly by Michael McCorry Rose and he has the longest emotional journey to play. His transitions come slowly and it is wonderful to watch Rose assay them. From annoyance to the return to the beginning of their relationship is an arduous and even dangerous route, but Rose takes the steps and we like his David more and more as he moves along.

James Lloyd Reynolds as Richard goes from uninteresting to loving never slowing down and his alterations come with acerbic bon mots, sweet and innovative expressions and the wonderment that comes from self-discovery. Reynolds is masterful in each scene and watching his growth is what this play does best. It's a bravura performance. ﻿

﻿Friedman uses Laura to contrast the self-sufficiency of her brother with David's unspoken neediness. The subtlety of the writing and the visual insecurity gives us both a bit of comedy and a sincerity that the play requires at moments of stress and indecision. Kate Wetherhead plays the serious and the silliness with equal srength and determination. She is more than just a different sound and visual, she is a mirror for each of the others to use in finding direction and determination. Her presence is actually usefulness and she is a welcome alternative to what could be just more of the same. 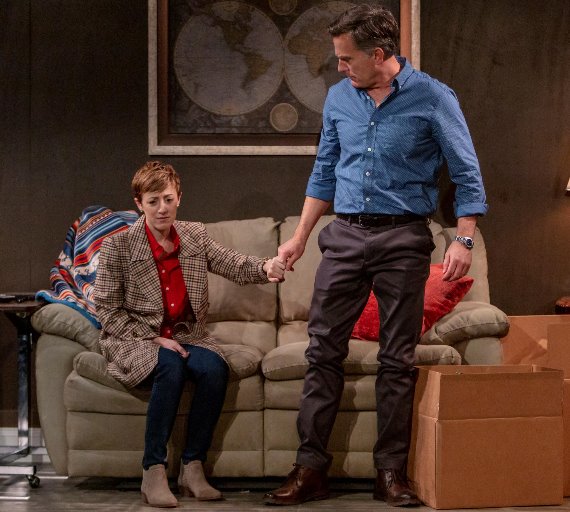 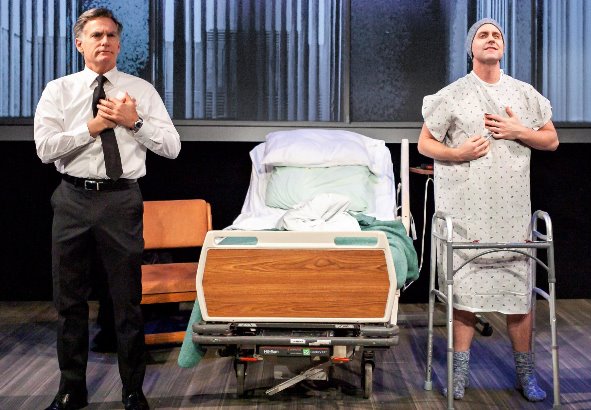 Jewish religious traditions play a part in the advancement of the story. Rituals of mourning, prayers and childhood memories are a part of the growth in the story of David and Richard. Director Gordon Greenberg uses these elements well and they are emotionally moving where most of the story is not. Though salvaged emotions move through the tale, the stage, so beautifully utilized by scenic designer Caite Hevner who takes advantage of the stage's possiblities with her sets and projections, becomes almost a distraction. Alejo Vietti brings reality home with her costumes and Rob Denton's lighting of the play keeps our attention focused. Greenberg and his team of designers deliver a good looking show that uses brief scenes to keep the timeline moving along even when the lack of sense could keep us wondering why Richard keeps showing up where he is seemingly unwelcome.

The play leaves many questions unanswered and many answers illogical. Of course this is the second play in a trilogy, so perhaps if we wait long enough everything will truly come out all right. Yes it will. I'm sure. It's still a show worth seeing for all the good work on stage.

Your Best One plays at theRep (aka Capital Repertory Theatre) located at 111 North Pearl Street, Albany, NY through February 9. For information and tickets go their website, capitalrep.org, or call the box office at 518-445-7469.