Directed and Choreographed by Todd Underwood.

"There is either the wisest madman or the maddest wiseman in the world."

For Christmas 1965 my family journeyed downtown to the ANTA Washington Square Theatre to see Richard Kiley as Don Quixote in Man of La Mancha. I remember it well; it was amazing. He and Joan Diener and Irving Jacobson, my best-friend's uncle played the three leading roles. Two years later I saw them again on Broadway at the Martin Beck Theatre. The show was just as good the second time. Three years after that Irving was on tour with the show AND WE WERE BOTH IN WASHINGTON DC SO i WENT TO SEE IT AGAIN. kILEY HAD BEEN REPLACED BY Keith Andes. Then, after two summer stock editions I went to see it at Lincoln Center where the three original stars were back on stage. I've seen three productions since then. It has been a constant in my life. Now, last night, I saw it again at the Mac-Haydn Theatre in Chatham, NY with Gabe Belyeu as Quixote, Maya Cuevas as Aldonza and Anthony Velez as Sancho and I enjoyed it almost as much as I did in Washington Square so many years ago. 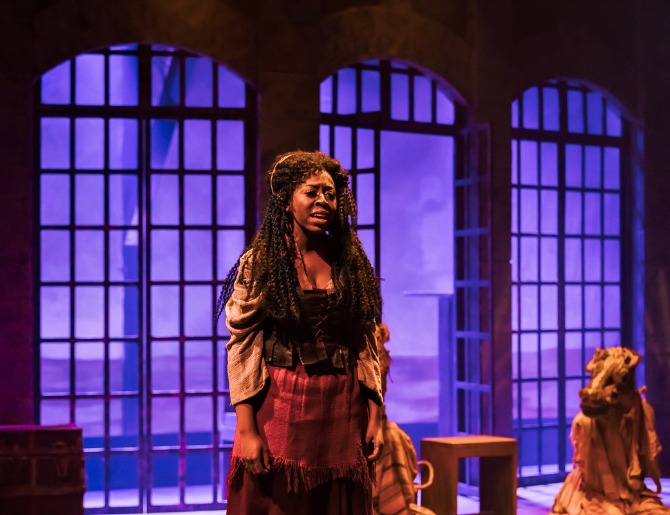 ﻿﻿This current production is stunning in so many ways. It is beautifully designed  in every way, set and lighting by Andrew Gmoser. costumes by Kurt Alger, hair and makeup by Matthew Oliver, props by Megan McQueeney. It only lacked in sound design by Whitaker Gardner. This designer/operator constantly emphasized the musicians over the singers, often drowning them out  completely. He did same thing with the underscore music rendering the dialogue impossible to hear (and I have excellent hearing).

Even so when I could hear the show it was most effective and at times extremely emotional garnering tears from me during Cervantes; song "Dulcinea" early in the first act, Sancho's song "I Really Like Him," Aldonza's aria "What Does He Want of Me?," and the Pastor's song "To Each His Dulcinea" (always my personal favorite in the show) As Aldonza Maya Cuevas gives out with a star performance. Using both her dark middle voice and her lyric high voice she creates a raw portrait of the kitchen-maid/slut that should be hard to beat at any level of production. Her seductivity is nil as she goes for the raw abandonment of an abandoned child, an adult child who ultimately finds an adoring father figure in Quixote. When she

talks to Sancho Panza about the "knight" there is total honesty in voice.

Sancho is played in a unique way by Anthony Velez, the youngest Sancho I've ever seen. In his rendition of "I Really Like Him" Velez brings an almost homosexual sense of  devotion to the older man he has chosen to serve. Sancho, in the show, is played by Cervantes' man-servant and in his obsequious  way that image is repeated in a less specific manner.

Two years ago in this company's production of  "Ragrime"  I thought I'd seen the best of Gabe Belyeu (It was a wonderful performance) but this season gives him a definite topper with his dual roles of Miguel de Cervantes and Don Quixote de La Mancha. Not only is his character portrayal just an example of his technique but the two parts show off his acting chops and his singing voice range. He takes our hearts in his character's unrelenting faith and optimism he also breaks our hearts with Spanish melancholey that borders on the Portuquese  Fado form of singing. This is without a doubt a performance that can stand up to Richard Kiley and Keith Andes and also goes a long way past Peter O'Toole's sickly 1972  film Quixote. 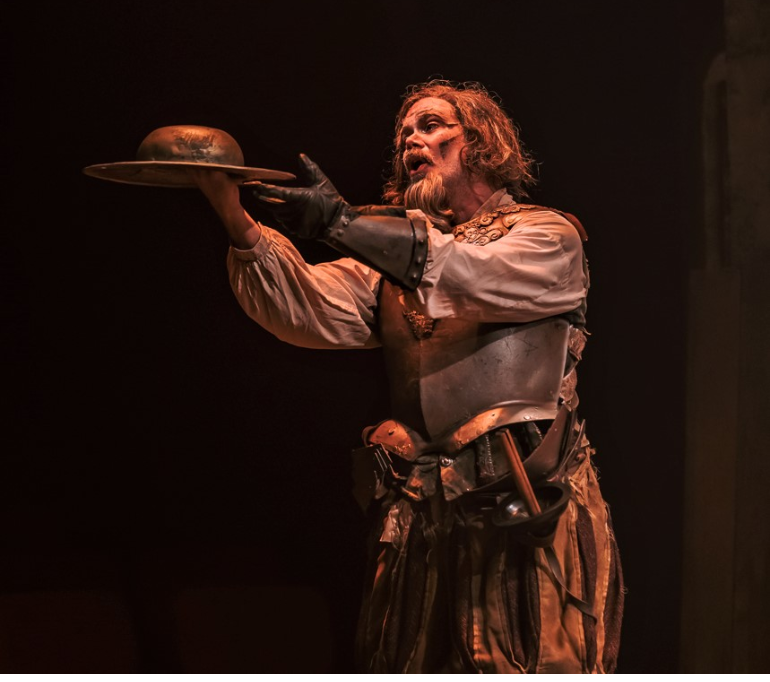 Todd Underwood has directed and choreographed this show making the perfectly integrated  work into one with a single vision. For the ultimate play-within-a-play  experience this production is hard to beat, but the line is easy to follow as Underwood clearly understands. He has heightened some of the emotional variants in the work and allowed his actors little leeway, I assume, for the flow of the piece is absolute. The company has also given him some superb players in addition to the principals. Kylan Ross is an excellent Padre with my favorite song; Chris Frazier makes an exuberant Barber; Ashley DeLane Burger does well as the Innkeeper; Andrew Burton Kelley is a master as Carasco. The entire ensemble create their characters and perform with mutuality, as they should.

I don't know when I will ever see a performance of this show that will leave me with such good spirits and high energy. This is definitely one show not to miss. It only runs for two weeks, so don't delay. Get your tickets while you still can.

Man of La Mancha runs  at the Mac-Haydn Theatre , 1925 Route 203, Chatham, NYr through September 5. For information and tickets call the box office at 518-392-9292 or go on line at www.machaydntheatre.org